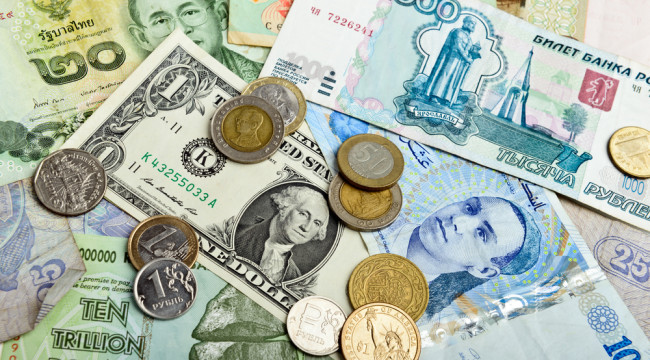 The Global Economy is at Stall Speed, Rapidly Loosing Lift

South Korea’s exports tumbled to $41 billion in April, marking the 16th consecutive month of declining foreign sales. Last month’s result represented a 11.2% decline from prior year, and an 18%drop from April 2014. Moreover, within that shrinking total, exports to China were down by 18.4% last month, following a 12.2% drop in March.

The Korean export slump is no aberration. The same pattern is evident in the entire East Asia export belt. That’s because the Red Ponzi is in its last innings. Beijing is furiously pumping on the credit accelerator, but to no avail.

As can’t be emphasized enough, printing GDP by means of wanton credit expansion does not create wealth or growth; it just results in an eventual day of reckoning when the speculative excesses inherent in central bank money printing collapse in upon themselves.

China is surely close to that kind of implosion. During Q1 total credit, or what Beijing is please to call “social financing”, expanded at a $4 trillion annualized rate. This was up 57% over prior year and represented debt growth at a 38% of GDP annual rate.

Stated differently, during the first 90 days of 2016 China piled another $1 trillion of debt on its existing $30 trillion debt mountain, while its nominal GDP expanded by less than $175 billion.

That’s right. The Red Ponzi is generating barely $1of GDP for every $6 of new debt. And much of the “GDP” purportedly generated during Q1 reflected new construction of empty apartments and redundant public infrastructure.

By now it ought to be evident that the Chinese economy is a brobdingnagian freak of nature that is destined for a collapse, and that its economic statistics are a tissue of fabrications and delusions. Even its export figures, which are constrained toward minimum honesty because they can be checked against Chinese imports reported by the rest of the world, are padded to some considerable degree by phony export invoicing designed to hide illegal capital flight.

Still, the implication of its export trends are unmistakable. When you aside the statistical razzmatazz of the Chinese New Year’s timing noise in the data, exports were down by 10%in Q1 as a whole. That is the worst quarterly drop since 2009 amidst the global Great Recession, and was nearly twice the rate of  decline during Q4 and Q3 2015.

To wit, western consumers are out of borrowing capacity—–so China’s exporters are out of runway. It is maintaining the appearance of GDP growth, in essence, by building pyramids and playing a bad joke on the west.

After all, China’s GDP accounts may be doctored and reported in a crooked manner, but they were gifted to the comrades in Beijing by the same style of Keynesian economic reasoning that lead the Great Thinker to advocate digging holes and then refilling them again as an economic curative. Keynes’ modern day followers on Wall Street apparently believe the same thing. 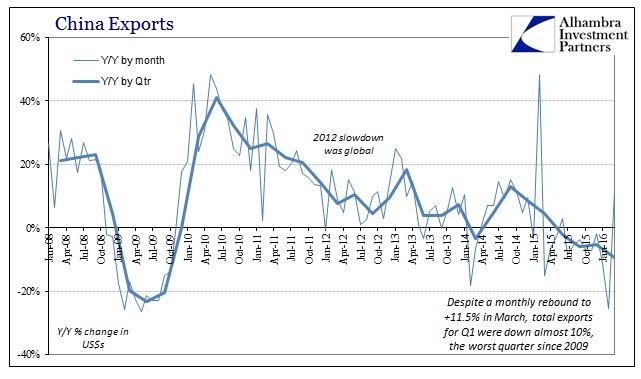 The latter are also peddling the myth of China’s smooth transition to domestic consumption and services. But when the central bank has exhausted the nation’s balance sheets, as is rapidly occurring in China, consumption growth perforce reverts to the growth rate of production and income. In China’s case, that vector will be heading south as its great construction binge and capital investment spree grinds to a halt.

In short, China is at nearly a 300% debt-to-GDP ratio already. What’s more, the denominator of that ratio is rotten to the core, representing as it does massive malinvestment and redundant public infrastructure that will one day be written off or abandoned as a dead weight loss to China’s economy.

More importantly, laid off construction and industrial workers and shrunken or closed business operations in the boom time sectors of its economy face drastic reductions in current cash flow and increasingly limited capacity to borrow—even in the Red Ponzi. So they will reduce spending, not recycle it, as Wall Street sell-side propagandists constantly proclaim.

That is, China is plunging into deflation and liquidation, not some grand transition to a US style shopping mall and services mecca. The US got to that dubious condition by borrowing from the rest of the world so that American consumers could live well beyond their means. Alas, China has already used up its national credit card, and there is no one left on the planet to borrow from, anyway.

Indeed, there is plenty of evidence already for the coming round of economic compression as opposed to theoretical recycling. China is a great materials conversion machines that imports raw material and intermediate goods and converts them into final assemblies and consumer products for export. Accordingly, when import volumes are falling, it is a another telltale warning that China’s credit ponzi is failing.

Thus, Q1 imports as a whole fell 13.3% from prior year, and represented a worsening of Q4’s decline of 11.8% . As Jeff Snider demonstrated in the chart below, China’s import trend has transitioned from a slowdown mode to sustained decline. 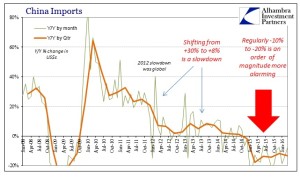 If China were experiencing a smooth transition to domestic consumption and services, imports would not be falling at the rates depicted above. After all, the two largest sectors of its services economy are construction and retail—-both of which depend upon the flow-through of imports: raw materials in the former case, and luxury goods from the DM economies in the case of the latter sector.

Needless to say, the ongoing production slump in China is taking its toll far and wide among the export economies that prospered during the boom phase of the Red Ponzi.

Singapore, which is the hub of the system, has dropped even more sharply than Korea. March exports were down 14% from prior year and nearly 21% from March 2014.

During the last two months, of course, the Red Ponzi has experienced another speculative mini-bubble. It seems that last year’s raging horde of gamblers, which at one point opened 387 million stock trading accounts, had piled into the commodity pits. While this latest outbreak did fuel a completely phony 50-70% rebound in the price of iron ore, cotton and rebar futures, it was not evidence of a sustainable economic revival.

In fact, during Q1 China consumed 332 million tons of petroleum fuels (gasoline and distillates) compared to 339 million tons during Q1 of 2015. That 2% reduction not only negates the China recovery meme, but also represents a sharp inflection point in the underlying trend of petroleum consumption.

To wit, between 2011 and 2015 China’s Q1 domestic petroleum fuel use, as measured by shipments of its two giant state oil companies, rose from 271 million tons to 339 million tons or by 5.5% per annum.  By contrast, it is now shrinking, and that is a sign of an unfolding deflation, not a return to boom times in another venue.

There is a reason why CapEx is plunging all over the world, and why Japan is slipping into recession, Europe is sputtering and the US has hit the flat line. Namely, the central bank fueled crack-up boom is doing exactly what Mises foretold; its cracking up.

To be sure, modern day economists have no use for such vocabulary, and are want to describe the slumping trade data now emerging daily as evidence that the global economy is lapsing into “stall speed”.

That’s a metaphor from aeronautics, of course, but it means the same thing.