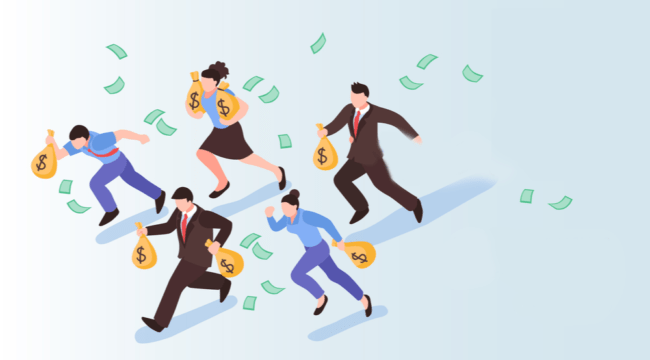 The Fools Are Rushing in Again

“All in” these gentlemen and ladies are going (or at least the computer algorithms that set market pace).

With cash levels at the lowest level since 1997 and equity allocations near the highest levels since 1999 and 2007, it suggests investors are now functionally “all in.”

You may recall sharply unpleasant events subsequent to 1999 and 2007 — after investors had become “all in.”

Now that they are once again marshalling their poker chips… and shoving them out onto table’s center.

Will Mr. Market break them once more — or do they possibly play a lucky hand this time?

Why are these gamesters going “all in” now?

We believe we have the answer, revealed anon.

All three major indexes have recently established fresh records. And so the market has scaled its cliff face of worry.

Trade war, impeachment inquiry, a fading global economy, Brexit, the devil and any number of impediments… it has clawed above them all.

Brexit, impeachment, budget deficit, lack of a budget — none of those things are affecting the market at this point.

Our spies even report fresh speculation about a possible “melt-up.”

A melt-up is the glorious terminal phase of a bull market, when stocks reach fever heat — before melting down.

Melt-ups have preceded some of history’s greatest collapses.

In the 18 months prior to the Crash of ’29, for example, the stock market nearly doubled.

Yet that is a topic for an altogether different day. Let us instead concentrate our focus on this early November day…

The market slightly lost its footing today. It nonetheless held the vertical.

The Dow Jones ended the day precisely where it began the day. The S&P took two piddling steps higher, the Nasdaq took 24 steps down.

But to return to our question:

Why are investors rushing back in now?

Reasons 1: The Federal Reserve sliced interest rates last week — the third occasion this year — and for a total of 75 basis points. And as explains Raymond James:

Over the last 30 years, when the Fed has implemented an “insurance” rate cut policy of 75 basis points, the equity market has been “lights out” as the S&P 500 has posted a 12-month forward return of about 23%, on average.

Reasons 2: Markets are again hopeful the United States and China will come to terms on trade.

Commerce Secretary Wilbur Ross announced yesterday the combatants were making excellent progress toward a “phase one” trade accord.

A successful resolution would lift tariffs on some $156 billion of Chinese exports, presently scheduled to enter force Dec. 15.

(Negotiations appear to have faltered somewhat today… for what it is worth.)

Reasons 3: Corporate stock buybacks this year — despite recent slackening — should nonetheless turn in their second-largest year on record.

Reasons 4: Stocks as a whole are surpassing earnings estimates.

These reasons and more we can cite.

But do they haul the full cargo of explanation?

Look to the Federal Reserve

Because the Federal Reserve has been slyly hosing in floods of liquidity?

A temporary expedient, they labeled it.

But long experience teaches that nothing can be so permanent as a temporary expedient.

Our agents inform us the New York Federal Reserve has emptied in some $250 billion since September.

We hazard a healthful portion of that $250 billion has gone to funding speculative activity on Wall Street.

And the hoses pump yet.

Furthermore, this we have on the Federal Reserve’s own word: these same hoses will pump “at least” through next year’s second quarter.

Apologists claim they are merely plugging a leak within the financial plumbing. And in detail, they may well be correct.

But these operations have expanded the Federal Reserve’s balance sheet… precisely as if they were quantitative easing.

And is QE4 responsible for the latest stock market spree?

And that is what is driving the stock market… They’re doing quantitative easing, and they’re going to print as much money as they have to keep the markets going up and to keep the economy propped up.

But stocks are vastly expensive by history’s standards. By some measures today’s valuations rise even above 1929’s and 2008’s.

Will today’s lemmings make much money in this stock market — as they go hoofing for the cliff?

The odds strike us as… slim.

That is because the higher things rise, the further they fall.

Assume today’s obscene valuations. From these heights, history argues the Dow Jones may plunge some 35% next time.

Meantime, we understand that options traders are lowering their guard of late.

These fine folks take out “call” options in anticipation market gains. They conversely take out “put” options to insure against losses.

When the number of calls runs too far ahead of puts, it is evidence the guard is down. And a lowered guard invites a blow.

That presently appears to be the case.

The last occasion the ratio of calls to puts attained current highs was on Jan. 23, 2018 — immediately prior to a market thumping.

We must assume investors presently streaming into the stock market will come ultimately to grief… as they did in 2001… and 2008.

When precisely, we do not know.

But “experience keeps a dear school,” as Benjamin Franklin affirmed two centuries ago — and “fools will learn in no other.”