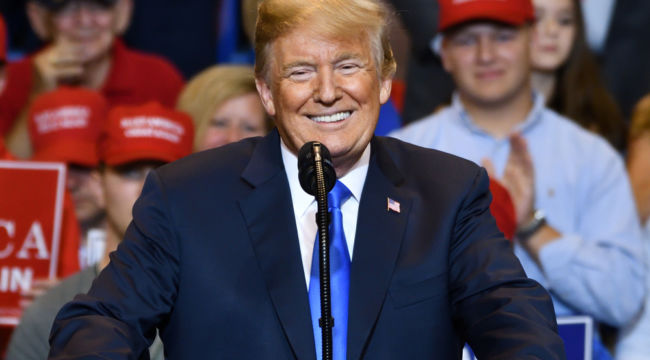 The focus of the anti-Trump forces has shifted. Trump was not removed from office as his opponents had hoped. And the long-awaited Mueller report on “collusion” by Trump with Russia has turned out to be an anticlimax showing no collusion. In fact, Trump is on track to complete a mainly successful first term.

Instead, the “resistance,” aided by the deep state and the media, have turned their attention to the 2020 election. Efforts to harass and distract Trump are now mainly for the purpose of weakening Trump’s reelection prospects and promoting the election of an opponent from among a field of Democratic candidates.

The greatest question facing President Trump over the next 18 months is whether or not he can avoid a recession. If he can, he stands an excellent chance of reelection. If he doesn’t, then a Democrat will likely win.

Trump supporters will be the first to tell you that the stock market has rallied from 18,529 on the Dow Jones industrial average index the day before Trump was elected to about 26,680 as of today. That’s nearly a 45% gain in 29 months.

Unemployment is near 50-year lows. African-American and Hispanic unemployment is at an all-time low. Labor force participation is steady after falling during the Obama years. Food stamp usage is down. Housing prices are up. Inflation is under control.

Growth in 2018 was above the 10-year trend since the end of the last recession and 2018 was the best full-year growth of that entire period. Real wages have shown their best gains in over 10 years.

While the economy is not booming by historical standards, it is producing its best performance since the global financial crisis. The U.S. economy looks particularly strong when compared with major trading partners such as the U.K., France, Italy, Japan and Germany. Even China is slowing dramatically as the U.S. continues to perform as a reliable engine of world growth.

The foregoing economic track record is repeated by Trump supporters and their (few) media allies on a daily basis. Most of the media simply ignore these data and continue the Trump bashing about the Mueller report and Trump’s business practices. These dueling narratives are by now business as usual when it comes to Trump.

But behind the media spin curtain, there is some reason to be concerned about the economy.

Manufacturing output is declining, both on a month-over-month and year-over-year basis. U.S. capacity utilization is showing a recent slight decline. Certain indexes of new orders and shipments are also showing declines. Imports and trade deficits have both increased sharply. The yield curve is slightly inverted in the 2–5-year sector.

None of these indicators is declining to extreme levels and there are other indicators showing positive results. None is pointing to a recession in the short run, but all should be worrisome to Trump.

His supporters continually recite the claim that this is “the best economy ever.” It’s not.

The Fed continues to tighten (through balance sheet normalization if not rate hikes) despite signs of a slowing economy. The problem is that monetary policy acts with a lag of 12–18 months. The economy is slowing now, not because of the December 2018 rate hike, but because of rate hikes in December 2017 and March 2018. The Fed’s later rate hikes in 2018 have yet to take hold.

They will soon and the economy will slow further. This dynamic can be seen clearly in Chart 1 below: 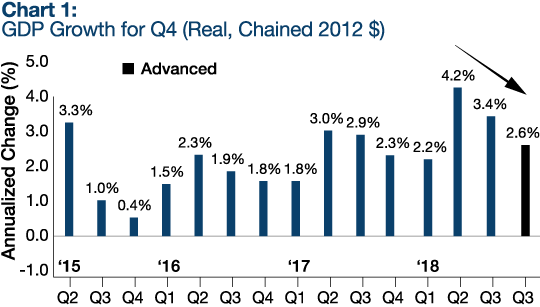 When the trend is not your friend. While GDP got a bump in the second quarter of 2018 as a result of the Trump tax cuts (4.2% annual growth), it appears that growth is declining rapidly toward the 2.24% average annual growth since the end of the last recession in June 2009. Obama also achieved several quarters of over 4% growth, but those strong quarters quickly reverted to the 2% level or lower.

Trump boosters pointed to the 4.2% annual growth in the second quarter of 2018 as “proof” that the president’s economic policies were returning the U.S. to sustainable above-trend growth. My view at the time was that Q2 growth was a temporary pop from the late–2017 tax cuts (effective Jan. 1, 2018), but we needed more data before drawing conclusions.

None of these trends (tight money, inverted yield curve, slower growth, etc.) is a sure predictor of recession, but all give some cause for concern. The current expansion (118 months long) is just a few months short of being the longest expansion in U.S. history. However, it is also the weakest expansion in U.S. history. The current expansion shows none of the inflation, labor shortages or capacity shortages that historically cause the Fed to raise rates and trigger a recession.

The Fed is conducting a balancing act between higher rates (to get ready for the next recession) and rate hike “pauses” (to avoid causing a recession now). So far, this finesse has worked, but it’s a delicate balance that could easily tip into recession. In addition, there are other factors (trade wars, global slowdown, financial panic) that are beyond the Fed’s control and could also lead to a recession.

But recession is the hardest to forecast with great accuracy and is therefore the biggest wild card. Trump was elected in large part, despite his off-putting demeanor, because he promised a better economy. He has delivered in part, but has to keep delivering.

If the economy goes into a recession, that could translate into a voter search for a new economic solution and that could lead straight to the Democratic promise of “free everything.”

Will the present odds change? You bet. As investors, the key is to stay nimble and stay alert to updates. As a Daily Reckoning  reader, you’ll be the first to know.

The impact of this election cycle on markets will be profound and the stakes for investors have never been higher. The time for investors to prepare is today.

That means you’ll want to be ready with a portfolio of gold, silver, fine art, land, cash, intermediate-term Treasury notes, and private equity.

And buckle in. It could be a very bumpy ride ahead.