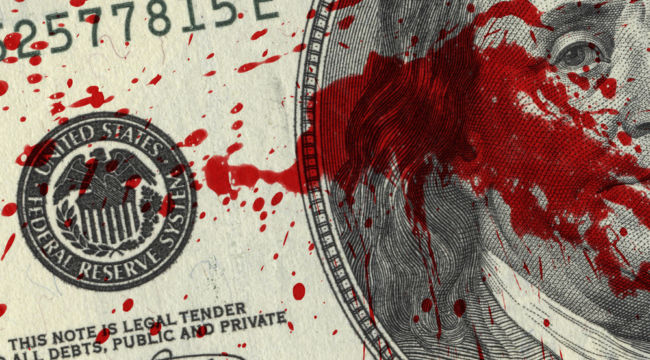 We all know the outlines of how the Fed and other central banks responded to the financial crisis in 2008.

First the Fed cut interest rates to zero and held them there for seven years. This extravaganza of zero rates, quantitative easing (QE) and money printing worked to ease the panic and prop up the financial system.

But it did nothing to restore growth to its long-term trend or to improve personal income at a pace that usually occurs in an economic expansion.

Now, after a 10-year expansion, policymakers are considering the implications of a new recession. There’s only one problem: Central banks have not removed the supports they put in place during the last recession.

Interest rates are up to 2.5%, but that’s far lower than the 5% rates that will be needed so the Fed can cut enough to cure the next recession. The Fed has reduced its balance sheet from $4.5 trillion to $3.8 trillion, but that’s still well above the $800 billion level that existed before QE1.

In short, the Fed (and other central banks) have only partly normalized and are far from being able to cure a new recession or panic if one were to arise tomorrow. It will takes years for the Fed to get interest rates and its balance sheet back to “normal.”

Until they do, the next recession may be impossible to get out of. The odds of avoiding a recession until the Fed normalizes are low.

The problem with any kind of market manipulation (what central bankers call “policy”) is that there’s no way to end it without unintended and usually negative consequences. Once you start down the path of manipulation, it requires more and more manipulation to keep the game going. Finally it no longer becomes possible to turn back without crashing the system.

But the bigger problem is there’s no way out, as I said. One manipulation leads to another.

The latest manipulation is quantitative tightening (QT, the opposite of QE), although it looks like QT is now being tapered. Confused? So is everyone else. The point is that the Fed has not normalized rates and they have not normalized their balance sheet. It’s just one manipulation after another with weak results and no way out.

The latest form of manipulation is what’s called a “standing repo facility,” which is just another flavor of QE. Under this facility, banks would swap their cash reserves at the Fed for Treasury securities on the promise that they could swap back into cash immediately if needed.

Essentially, this manipulation would allow banks to hold fewer reserves than presently required, knowing the Fed would have their backs if they ran into trouble.

This is just another accounting gimmick to pretend to clean up the Fed’s balance sheet. It won’t be the last manipulation.

We’re a long way from that.

The Fed’s manipulation of interest rates has large implications for markets. Below, I show you how the bond market is being set up for heavy losses, which could spread to the stock market. Read on.