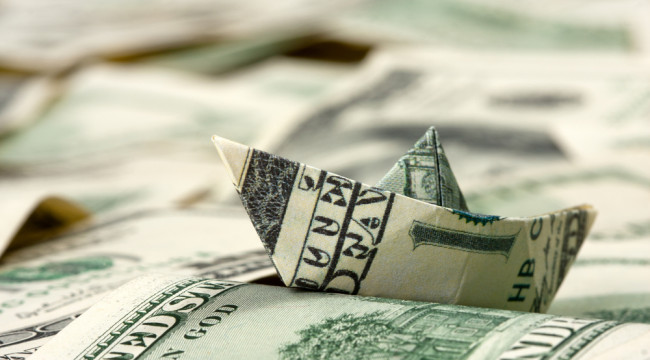 The Fed's Ship of Fools

If you don’t think financial markets have been utterly destroyed by central bank intrusion then how can you explain Friday’s 460 Dow point reversal higher after the post-nonfarm payroll low? It was pure machine rage triggered by another implied “lower for longer” Fed policy signal.

While I think the Bureau of Labor Statistics (BLS) establishment survey isn’t worth the paper it’s manipulated on, it did take a drastic turn for the worse. So doing, it thereby monkey-hammered the recovery narrative of the Keynesian chorus on Wall Street and at the Fed.

In fact, the alleged 245,000monthly rate of job gains registered during the year through July was about the only fig leaf of proof they have been able to offer as to why “escape velocity” was finally at hand; and why household consumption would soon accelerate, thereby powering up a new leg of recovery.

Well, that meme was shot dead by the September report including the sharp downward revisions to prior month. The average gain for August/September was 139,000. That is, until the BLS revises it all away, the last two-months rate of jobs gainhasaveraged 42% lower than prior trend!

And by your way, the BLS has already announced its benchmark revision expectation for February, and it’s a 200,000 downward adjustment to the levels reported Friday.

Even then, we are mainly talking about waiters, bartenders, sales clerks, home health aides and temp agency gigs. But since these BLS paint-by-the-numbers results are used by the monetary politburo to navigate, the fast money was not confused as to the September report’s implication.

They hit the “buy, buy, buy” button so hard and fast that even Cramer would have been proud.

That’s why the stock market can only be described as a dangerous casino which is untethered to the real main street economy. Friday’s report was about as clear an economic warning signal as you could want. So, in effect, the casino was buying hand-over-fist right into the teeth of the next recession on the conviction that the ship of fools running the Fed will delay “liftoff” yet again.

Indeed, the money market is already pricing out any chance of a rate increase in October and December, and doesn’t reflect even a 50% chance of liftoff until next March.

You could call it never and be done with it, but even that bears its own ringing absurdity. Were the Fed to defer until March, as the market it now predicting, it would mean that the money market rate would have been pinned to zero thru month #81 of this so-called recovery.

That is to say, why in the world do these blockheads think they have outlawed the business cycle when so far this century they have already produced two devastating financial meltdowns and business recessions in their aftermath?

We are already on borrowed time based on past domestic cycles, and that doesn’t even factor the huge international headwinds storming toward these shores owing to the unprecedented global deflation now underway. Indeed, to implicitly assume — as did the monetary politburo — that this expansion could substantially outlast the 72 month-long Greenspan/housing bubble was just willful conceit. Normalization should have commenced long ago.

But now the Fed’s lunatic policies are drifting straight into the perfect storm of financial and economic conflagration. We are absolutely on a 10-20 month glide path toward recession. At the same time, however, the Fed will remain lashed to the zero bound because at each upcoming meeting until the National Bureau of Economic Research (NBER) officially declares a recession has incepted there will be increasing frequency of “incoming data” signals like the September jobs report suggesting that the economy is too weak for lift-off.

That will lead, in turn, to more bouts of indecision and more incoherent babble from the Eccles Building about why all of these headwinds are temporary or unexpected; and to a repetition of the Fed’s groundless confidence that the US economy will soon return to targeted levels of inflation and growth.

But Friday’s report put the lie to what is now self-evidently ritual incantation from the Eccles Building. If the establishment survey numbers are not reinforcing the recovery meme, pray tell what is?

The fact is, in a political economy saddled with $19 trillion of public debt, there is no possibility of escape velocity without robust growth of private business sales and a healthy balance of inventories. The public sector — and that includes most of the giant medical care component of the services economy — is out of the stimulus business, and properly so. Saddled as it is with the giant baby boom demographic cohort hurtling toward retirement, the US is functionally broke, anyway.

But the facts scream out that the private business sector has never really recovered and is now stalling out entirely.

To wit, total business sales growth has slowed to just 0.8% per annumfor the last three years. And most recently during the year ending in July, sales actually dropped by 2.7%.

Not surprisingly, the inventory to sales ratio is heading right back into recession warning territory. In fact, that ratio has been signalling all along that the internals of this so-called recovery are dangerously weak.

Whereas the growth of business sales — manufacturing, wholesale and retail — has been floundering at sub-basement levels relative to all prior cycles, corporations have been adding to inventories at a blistering pace, reflecting the bullish C-suite optimism engendered by soaring stock prices and fulsome winnings from executive options.

Specifically, whereas total US business inventories dropped by $165 billion or about 11% from November 2007 through the recessionary bottom in August 2009, they have rebounded by $500 billion or nearly 40% since then.

That amounts to a 4.4% annualized growth rate — far above the expansion rate of sales; it means that the Fed’s drastic falsification of financial prices has not only inflated the stock market, but has also induced the C-suite to inflate business inventories relative to sales like never before.

Nor can this be explained away as some short-term aberration. The fact is, the rate of nominal business sales during this entire recovery is downright punk compared to all previous cycles.

After all of its boasting about economic recovery and endless pontification about the imminent return to full employment, the monetary politburo might have at least noticed that nominal sales growth has averaged only 1.1% annually for the last 7 years.

And that’s in nominal dollars. There is no amount of deflation of the official deflators that the Washington statistical mills could undertake that would turn that hard fact into even a simulacrum of recovery.

Nor does the purported shortfall of inflation have anything to do with this cycle’s limp trend, either. During the 1990-1999 cycle, for example, the business deflator rose at a 1.8% annualized rate, meaning real business sales expanded at 3.7% per annum. Likewise, during the Greenspan housing boom, the business deflator rose at a 2.0%, meaning that real sales expanded by 2.6% per year.

Since the pre-crisis peak in Q4 2007, by contrast, the business deflator has risen by 1.4% annually –a figure which is only slightly below the last two decades and hardly indicative of some kind of depressionary Armageddon. But it does exceed the niggardly growth rate of nominal sales since Q4 2007, meaning that business sales have actually been shrinking in real terms at 0.3% annually for nearly the last eight years. There is nothing in the modern record book that is even close to that dismal trend.

So amidst its Keynesian certitudes, the monetary politburo parses every flicker of the goal-seeked establishment survey and related Job Openings and Labor Turnover Survey (JOLTS) report; and these reports surely are goal-seeked by their very methodological reliance on dynamic trend-adjusted projections, not honest empirical surveys of the actual jobs market.

Yet when it comes to the relatively clean data on total private business sales, the Fed minutes have never once even mentioned this crucial data series since this so-called recovery commenced. Accordingly, our monetary rulers have no clue that real business sales have been stagnant and business inventories have been rising dead-on toward a level of excess which will trigger the next recession. All it will take is an adverse jolt to the unwarranted C-suite confidence in the Fed’s ever expanding financial bubbles.

Likewise, these mechanical Keynesians have never once bothered to reflect upon the quality mix of the numbers celebrated on Jobs Friday. Yet once again, the September report was typical. It posted only 36,000 breadwinner jobs — meaning that the total at 70.4 million is still 2.3 million jobs or 3.2% shy of where it stood in January 2001!

That’s right. When it comes to full-time, full-pay jobs in mining/energy, manufacturing, construction, trade and distribution, all the jobs being reported are still of the “born again” variety.

That is, jobs which were first posted in 1999-2000; then liquidated during the 2001 recession; reborn during the Greenspan housing bubble; liquidated again during the Great Recession; and still have not yet fully recovered after 81 months of zero interest-rate policy (ZIRP) and $3.5 trillion of Fed asset purchases with fiat credits snatched from thin air.

And this ship of fools claims to know what it is doing!.

Self-evidently, the Fed’s massive money printing and ZIRP campaign has not reflated the main street economy. What is has done is fuel massive financial bubbles such as this one in biotech that has just recently begun to roll-over.

Yet these clowns — typified by recent gibberish from Vice-Chairman Stanley Fischer — still cannot recognize that as they ride the zero bound into the next recession they are only further inflating the bubble and helping to ensure that when it does burst the malinvestment and financial losses will be monumental.

But don’t take my word for it. Here’s what the man said:

Federal Reserve Vice Chairman Stanley Fischer said he doesn’t see immediate risks of financial bubbles in the U.S., while raising concerns that the central bank’s policy tool kit to deal with such occurrences is limited and untested.

“Banks are well capitalized and have sizable liquidity buffers, the housing market is not overheated and borrowing by households and businesses has only begun to pick up after years of decline or very slow growth,” the Fed’s No. 2 policy maker said in a speech Friday in Boston.

In short, we are now in an exceedingly dangerous phase of the central bank end game. They continue to pour gasoline on the fires of financial speculation, yet smugly insist that all is clear.