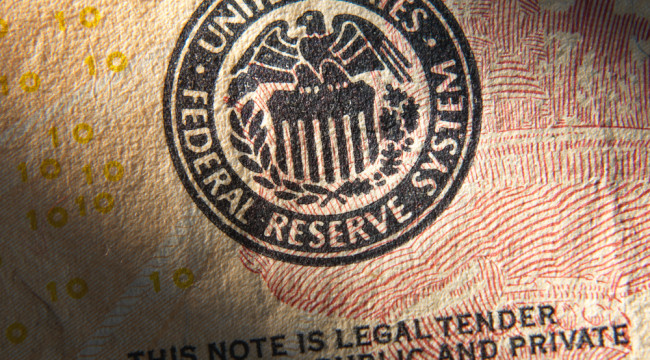 The chart below crystalizes why the Fed is stranded in a monetary no man’s land. By the time of next week’s meeting the federal funds rate will have been pinned at about 10 bps, or effectively zero, for 84 straight months.

Yet during that same period, the consumer price level has risen by 1.75% per year. And that’s if you give credit to all of the BLS gimmicks, such as hedonic adjustments for quality change, homeowners “imputed” rents and product basket substitution, which cause inflation to be systematically understated.

On a basis that is close enough for government work, therefore, the real money market interest rate has been negative 2% for seven years. But that’s so crazy, unjustified, and unprecedented that even the Keynesian money printers who run the Fed have run out of excuses.

Presumably, Yellen and her posse know that we did not have seven years running of negative money market rates even during the Great Depression of the 1930s.

So after one pretension, delusion, head fake and forecasting error after another, the denizens of the Eccles Building have painted themselves into the most dangerous monetary corner in history. They have left themselves no alternative except to provoke a riot in the casino——-the very outcome that has filled them with fear and dread all these years. 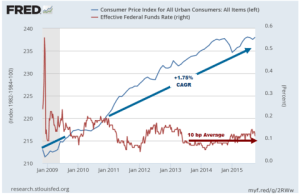 Indeed, Yellen and Bernanke before her have made a huge deal out of communications clarity and forward guidance. But how do you explain to even the credulous gamblers and day traders on Wall Street that the business cycle has not been outlawed and that free money can not last forever, world without end?

Likewise, after all these years of saying that the dollar’s exchange rate is the responsibility of the US Treasury— and that the Eccles Building only does domestic monetary policy—– how will the Fed heads explain that they have wrapped themselves around the axle of an unrelentingly strong dollar?

And that they are impotent to stop the gale force of global deflation and recession being imported into the domestic economy by the inexorable unwinding of the massive dollar short that they have spend years fueling?

For most of this century the Fed’s post meeting statements and minutes have been progressively degenerating into embarrassingly empty pabulum, and its overwhelming consensus was an artifact of being on the Easy Button 80% of the time.

In that environment there was little to debate and less to explain. They simply delivered an economic weather report and urged Wall Street to hang on for the ride.

But now the Fed must emerge from the shaded zone shown above for the first time on a sustained basis since the 1980s. Yet as it seeks to explain a macro-economic slump that it absolutely did not see coming and to confess its complete lack of policy tools to reverse the worldwide deflationary tide now mounting, its statements will be reduced to self-evident and self-contradictory gibberish.

Likewise, the 19 members of the Board will take to noisy public quarreling right in front of the boys and girls on Wall Street for the first time in their lives.

The reason that there will soon be a riot in the casino, therefore, is not owing to the prospect of a 25 bps pinprick after all this time on the zero bound.

The hissy fit will happen because the Fed’s words and actions starting next week will not say “we have your back, keep buying”.

The message will be “we are lost and you are on your own”.

And that’s not “priced in”. Not even close.

Evidence that a completely new monetary policy ball game is commencing comes from JM Keynes’ current vicar on earth himself, Larry Summers. Three days ago he penned a strange op ed in which he apparently reminded himself that the business cycle has not been outlawed——something most non-PhDs presumably already knew:

U.S. and international experience suggests that once a recovery is mature, the odds that it will end within two years are about half and that it will end in less than three years are over two-thirds. Because normal growth is now below 2 percent rather than near 3 percent, as has been the case historically, the risk may even be greater now. While the risk of recession may seem remote given recent growth, it bears emphasizing that since World War II, no postwar recession has been predicted a year in advance by the Fed, the White House or the consensus forecast.

Well now. If you wait until month 78 of a business expansion to end the emergency policy and to then venture even a few basis points off the zero bound, you will indeed use up the remaining runway right fast.

That’s because the average of ten business cycle expansions since 1988 have lasted but 61 months; and the only one appreciably longer than the present tepid affair was the 119 month stretch of the 1990s. 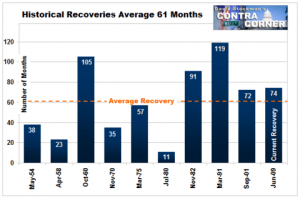 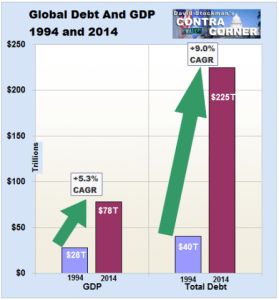 And, most importantly, China was still a quasi-agrarian victim of Mao’s destructive experiments in collectivist economics and state generated famine, not today’s towering Red Ponzi. That is, it was irrelevant then, but is now a bloated economic whale sinking under the weight of $30 trillion of debt and the most reckless spree of over-investment and mindless public and private construction in recorded history.

So as this domestic business expansion cycle get long in the tooth, the US economy is confronted by a veritable engine of global deflation in the form of China and its EM supply chain. After a 20 year credit driven boom, it’s now payback time. All of them find their exports stalled, their exchange rates falling, and their debt service exploding higher.