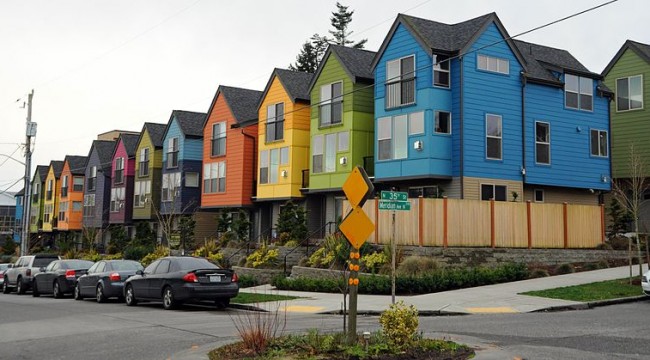 Give the Federal Reserve its due: It’s managed to reinflate the housing bubble. Sort of.

Sales of existing homes have returned to levels last seen in February 2007, says the National Association of Realtors (NAR) this morning. 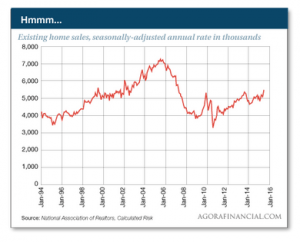 Heh — we’ll pause to note February 2007 was the first time a big bank booked a loss on subprime mortgage securities and the start of the housing meltdown became apparent to anyone with a pulse.

A caveat: The National Association of Realtors has a history of fudging this number.

We exposed the scandal in real-time during 2011.

The NAR did not use MLS listings as its reference point. Nor did it rely on county courthouse filings.

Instead of tangible figures like those, it relied on a statistical model keyed to the 2000 Census, making various assumptions about population growth after 2000.

A few days before Christmas 2011 — a time when presumably no one would notice — the NAR revised its figures going back to 2007. Existing home sales in every year from 2007-2011 turned out to be at least 11% lower than we were first told.

God only knows what they’re doing to generate the numbers now.

But here’s a number that’s harder to fudge (we think). The NAR says the average price of an existing home has reached a new all-time high — $236,400. That surpasses the previous record set in July 2006.

“Part of the rise in prices,” says a Bloomberg summary, “is tied to a lack of distressed sales, at only 8% of June’s total, which is a record low.” Wow, not a lot of foreclosures or short sales there.

“Tight supply is another factor driving up prices, at 5.0 months at the current sales rate versus 5.1 and 5.2 months in May and April and against 5.5 months last June. There were 2.30 million existing homes for sale on the market in June.”

Before the housing market went to hell in 2007-09, first-time buyers usually made up about 40% of the market. By spring of last year, the NAR says that number had sunk to only 27%.

But for the last four months, the number has been at or above 30%. At least a few millennials are doing well enough to keep up with their student loans and move out of Mom’s basement, it seems.

That could be huge, says Zach: “As new families are started, demand for housing leads to construction jobs, along with plenty of ancillary businesses in mortgage servicing, home repair, landscaping, furniture sales and so on.

“The pickup in first-time home purchasers is great news for home construction stocks,” says Zach — “especially those that build homes that are affordable enough for first-time homebuyers.”