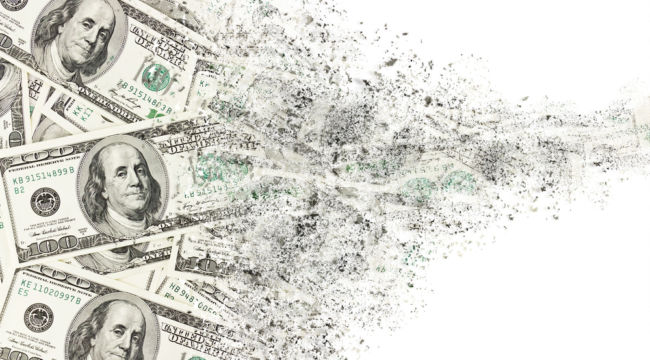 The Fed Puts off the Day of Reckoning

The times are out of joint… and the old familiar signposts point wrong.

The stock market runs once again at record heights. And the economy simmers along.

In apparently hale times such as these…

The Federal Reserve might bridle the animal spirits, choke the reins some… and raise interest rates.

Or at the least hold rates steady.

The pace is brisk, after all.

Yet today Jerome Powell loosened his hold, applied the whip… and urged the nag onward…

A Rate Cut It Is

The Federal Reserve first crossed into this territory on the way up — when it was attempting to “normalize” rates.

Now it has ranged into this zone on the way down… as it abandons normalization.

We are not certain it will ever normalize. We are — in fact — confident it will not.

It races a race with no finish line.

How did Mr. Market, viewing from the grandstand, take today’s action?

The major indexes opened in red this morning, the three of them.

They remained in red through 2 p.m. Eastern. Then at the appointed hour, word came down…

And the animal spirits began to stir — somewhat.

But today’s rate cut had already been “baked into the cake.”

The market is far more concerned about the future.

All ears were glued to Mr. Powell’s post-announcement babblings, in search of clues.

Suggestions of additional rate cuts would scintillate and enrapture.

What did Mr. Powell say about the future?

Did he dangle a plum… or grab a stick?

He dangled no plum.

We see the current stance of monetary policy as likely to remain appropriate as long as incoming information about the state of the economy remains broadly consistent with our outlook.

Moreover, he claimed, “Monetary policy is in a good place.”

We are vastly unconvinced by the chairman’s flubdubbery. And we do not believe monetary policy is “in a good place.”

Instead, cast your gaze toward the uncertain future…

Will the Stock Market Rise 20% Over the Next Year?

Taking history as your example… what can you expect from the stock market in the year ahead?

[Returns] have been spectacular in the six- and 12-month period following those decisions by the rate-setting Federal Open Market Committee. LPL data show that the S&P 500 index has been up 10% a half-year later and 20% a year out, gauged by three initial 25-basis-point cuts in 1975, 1996 and 1998. 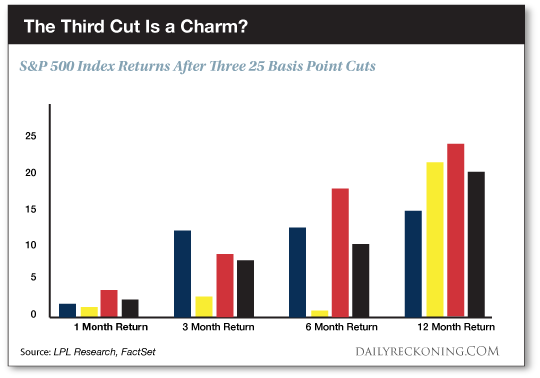 Trump Would Be Happier Than Anyone

If true — if true — few will dance a livelier waltz than the incumbent president.

The 2020 election is one year and one week distant.

If the S&P rises 20% over that space, Mr. Trump will likely keep his throne.

(Here we assume impeachment will not first heave him out.)

But beware — the past throws out false clues and false leads to send you astray.

We find no reason why the stock market must go down the same rising road.

The lower the number, the cheaper the stock. And vice versa.

Its historical average runs to 16.6.

That is, stocks are vastly expensive by history’s standards.

Only during the dot-com delirium were stocks dearer than today: 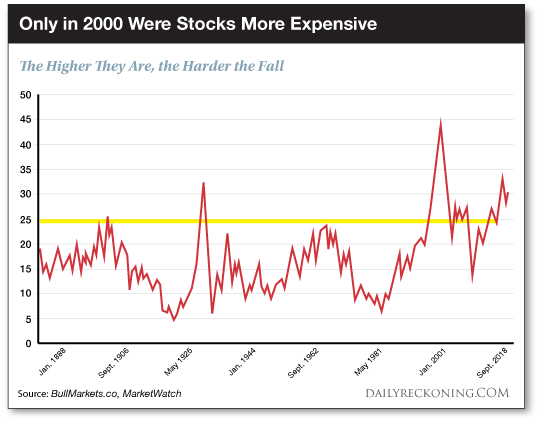 Who knows what pin might collide with what bubble within the next year?

Financial journalist Mark Hulbert has perspired over the market history since 1900.

Given today’s wild valuations, how far might the Dow Jones drop next time?

They run far ahead of the underlying economy. And soon or late, gravity will work them down:

We can’t just create money out of thin air by pushing stock prices upward. At some point the market insists that prices reflect real value (this is Shiller’s core finding). Pushing prices up is a holding action. Sooner or later we have to accept that fair-value prices will prevail again and that the economic pain that follows from a return to fair-value prices must be endured.

High stock prices are a lie.

But like a vicious cancer, it will come back around:

To my way of thinking, we will be seeing a resumption of a crisis that we experienced for only a few months in late 2008 and early 2009 and then put off for another time. We put that crisis off… But the put-off was a temporary thing.

The only lasting cure?

To achieve more permanent solutions to the problems that received national attention in late 2008, we are going to have to come to terms with the primary cause of those problems — the high stock prices that still apply today.

Whether the curtain comes down within the next year, the next two years, the next five years or 10… the answer is beyond our slender abilities.