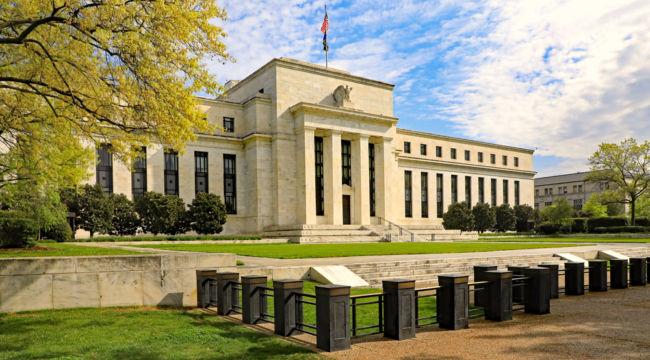 The Fed Is Stealing Our Future

The first was to wash out the sins of the past decade. The second was to sin on a vastly mightier scale.

The Federal Reserve selected option two. That is, it chose sin on a vastly mightier scale.

All the imbalances, all the fraud, all the dishonesty of the past decade it is multiplying — by two, by three, by four, by five.

And so it is condemning the United States economy to a lost decade of stagnation and anemia.

Cutting off the Future

The Federal Reserve is dynamiting the bridges leading from present to future. To future recovery. And future growth.

That is because massive debt drains the future… and leaves it emptied.

Plunging into debt introduces a sort of hand-to-mouth living. It diverts cash flow to the service of existing debt — often unproductive debt.

And so investment in the future goes channeling backward. It is a titanic larceny of the future.

And artificially low interest rates are the stickup gun.

The Chains of Debt

The rise in corporate debt, which in the last decade was used primarily for nonproductive purposes such as stock buybacks and issuing dividends, has contributed to the retardation of economic growth…

The massive debt levels being added to the backs of taxpayers will only ensure lower long-term rates of economic growth.

A debt-based financial system heaves every principle of sound economics out upon its ear.

It is an economics of the hamster wheel — frantic — but stationary.

In back of it all is a vicious hostility to savings…

The Fed’s War on Savings

The Federal Reserve would heat your savings into a potato so hot you cannot hold them for an instant.

You must throw them into profitable investments… which will coax the economic engine to life.

Or you must spend them on goods and services. That will yield the same healthful effect.

This is the royal route to growth — as the theory runs.

Thus the saver is a public menace, a criminal of sorts, a rascal.

Saving is a passable evil in normal times, most economists allow.

But in dark times — as these — saving locks needed capital out of the productive economy.

The central bank must therefore suppress savings to increase spending. And investment.

The more accumulated savings in the economy… the more potential investment.

An economy built atop a sturdy foundation of savings is a rugged economy, a durable economy.

It can withstand a blow.

In the past we have cited the example of a frugal farmer to demonstrate the virtue of savings. Today we cite it again…

This fellow has deferred present gratification. He has conserved a portion of prior harvests… and stored in a full silo of grain.

There this grain sits, seemingly idle. But this silo contains a vast reservoir of capital…

This farmer can sell part of his surplus. With the proceeds he purchases more efficient farm equipment. And so he can increase his yield.

Meantime, his purchase gives employment to producers of farm equipment and those further along the production chain.

Or he can invest in additional land to expand his empire. The added land yields further grain production.

This in turn extends Earth’s bounty in wider and wider circles — and at lower cost.

That is, his capital stock expands and the world benefits. Only his original surplus allows it.

He also retains a prudent portion of his grain against the uncertain future.

There is next year’s crop to consider. If it fails, if the next year is lean, it does not clean him out.

He has plenty laid by. And so his prior willingness to defer immediate gratification may pay a handsome dividend.

He can then proceed to rebuild his capital from a somewhat diminished base. Without that savings base of grain… he is a man undone.

We will call this man Farmer X. Contrast him, once again, with Farmer Y…

This man enjoys rather extravagant tastes for a farmer. He squanders his surplus on costly vacations, restaurants, autos, etc.

He likes to parade his wealth before his fellows.

He deprives the future so that he may gratify the present… and rips food from future mouths.

And should next year’s crop fail, this Farmer Y is in a dreadful way.

Assume next year’s crop does fail.

The surplus grain that could have sustained him he has dissipated. He has no reserves to see him through.

He is hurled into bankruptcy. He must sell his farm at a fire sale.

If only this wastrel had saved.

Multiply this example by millions and it becomes clear:

A healthy economy requires a full silo of grain — of savings, that is.

An empty silo means no investment in the future. And society has nothing stored against future crises… like an imprudent squirrel that has failed to stock acorns against winter.

Henry Hazlitt, from Economics in One Lesson:

The artificial reduction of interest rates discourages normal thrift, saving and investment. It reduces the accumulation of capital. It slows down that increase in productivity, that “economic growth” that “progressives” profess to be so eager to promote.

The Enemies of Savings

The critic of savings will concede that saving may make individual sense.

But if everybody saved, he argues, consumption would wind to a halt.

Government must therefore race in to supply the demand that individual savers will not.

It must be “the spender of last resort.”

But that which applies to the individual applies to society at large, the old economists insist.

When society saves in lean times, it is not eliminating consumption. It is merely delaying it.

Or to return to Hazlitt:

But the Federal Reserve has made its choice. It will drown us all in debt. And all for a mess of pottage.

Thus we face a future of limited growth… slender prospects… and frustrated ambitions.

But at least Wall Street will prosper…