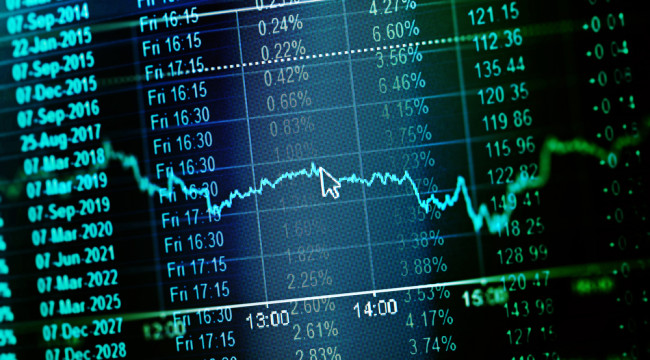 BALTIMORE, Maryland – What did we tell you…

The Janet Yellen Fed will not raise interest rates in any meaningful way anytime soon. Instead, she will announce new QE programs.

But it could have been worse…

U.S. stocks recovered some of their losses for the day, after the minutes of the most recent Fed meeting showed Yellen and team still won’t pull the trigger on a rate hike until certain unspecified conditions are met.

According to the Fed, the conditions for a rate increase are “approaching” but haven’t been met yet.

Well, guess what… Conditions will never be met.

It doesn’t work that way. This economy will never recover – not as long as it is under the current Keynesian management. It is like a patient attended by quack doctors – doomed to get sicker from their quack “cures.”

And like morphine, you have to up the dosage just to stay in the same place. Take away the drugs, and the pain rises.

The pain caused by falling stock prices, for example.

Take away the cheap credit… and the buybacks on Wall Street dry up. That means earnings per share – the ultimate driver of stock prices – fall, too.

With falling corporate earnings and stagnant household incomes, the inevitable direction for stock prices is also down.

As we discussed in last Friday’s Diary, we’ve already seen that today’s stock prices are not the result of sober reflection on the part of investors.

They do not sit down with a yellow pad and a No. 2 pencil and calculate streams of income over the next 10 years. Instead, they count on the cronies to rig the market for their benefit.

As regular readers know, corporate execs have been borrowing at ultra-low rates and using the money to buy and cancel shares in their own companies. This clever piece of financial engineering reduces the count of outstanding shares and pushes up their value.

The insiders get bonuses… by looting the company’s capital and replacing it with debt. And shareholders get a nice bump in their portfolios.

And according to a new report from Aranca Investment Research, S&P 500 companies have spent almost $2.3 trillion on buybacks over the same period.

So about one-fifth of the increase in market cap is due to buybacks.

Cheap credit is essential to the looting process. Take it away and the flimflam falls apart. So do stock prices.

But the Fed can’t allow a real crash in the stock market. The “recovery” illusion is based on rising prices for equities.

Supposedly, this leads to a “wealth effect.” According to Fed doctrine, as investors see the values of their investment portfolios rise, they start to spend like drunken capitalists.

The economy is then supposed to explode with growth as “animal spirits” return to shoppers… leaving shiny coins all over the street for the poor to pick up.

Of course, it doesn’t happen…

Instead, the real spoils of cheap credit go to the C-suite cronies, who manipulate the stock market by pumping borrowed funds into buybacks. Stocks go up. But the real economy goes nowhere.

At the Sprott-Stansberry Natural Resource Symposium in Vancouver last month, our friend and Stansberry Research analyst Dr. Steve Sjuggerud debunked the idea that a rising interest rate cycle always coincides with falling stock prices. He pointed out that stocks have tended to rise in value during periods of rising rates.

Don’t worry about the Fed tightening, he told the audience. It doesn’t have to mean lower stock prices.

We don’t doubt that Steve is right. Typically, when the economy heats up due to organic growth, interest rates rise… and so do stocks.

The stock market is being driven higher by ultra-low rates, QE, and clever financial engineering. And the economy is not in the kind of healthy expansion mode that pushes up stock prices and interest rates at the same time.

Instead, much of today’s economy is as cold and lifeless as a corpse.

Shipping and freight prices reveal a slowdown in trade. (See today’s Market Insight below for more on that…)

A strong dollar, slowing exports, and falling commodities prices are hammering many of the emerging markets.

And China is struggling to avoid its own Great Depression.

That’s why Ms. Yellen is reluctant to raise rates. She knows it will be painful when she does.

Instead, she’ll administer another dose of morphine…