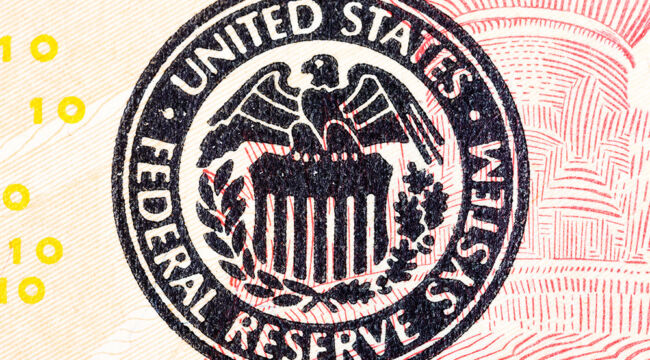 Gold’s recent selloff looked familiar in that it resembled the types of gold selloffs that occurred when the Fed talked about tightening its loose policy for years in the mid-2010s.

It sure talked a good game. But, when it came time to really test how much tightening the debt-saturated economy could handle, by late 2018, the Powell Fed folded like a cheap suit.

In fact, the Fed not only felt compelled to reverse the slow, wimpy tightening that it had implemented from 2016-18; it also had to restart QE in the fall of 2019 when it became clear that the yield curve was not steep enough to absorb a wave of Treasuries hitting the market at the time.

By late 2019, the repurchase loan (“repo”) market seized up. It threatened to push short-term rates in the money market above the Fed’s policy rate. So, the Fed implemented the so-called “not-QE” program in which it boosted the volume of repo loans to ease funding conditions in the Treasury market.

When the COVID crash arrived, it provided cover to slash short-term interest rates back to zero. With a slightly wider yield curve, primary dealers in the Treasury market could once again fund themselves at a near-zero rate to absorb the heavy volumes in Treasury auctions.

This $120 billion per month in QE has flooded the Wall Street money markets with so many excess reserves that the system temporarily ran out of safe securities or bank deposits to park them. Rates on Treasury bills were on the verge of going below zero percent.

The Fed wants to avoid that because it’s damaging to money market funds. So, it implemented a large reverse repo program. Over the past two and a half months, the Fed’s reverse repo facility expanded from practically zero to $813 billion.

A complicating factor that added to the demand for reverse repo facilities is the fact that the Treasury Department has been drawing down its Treasury General Account at the Fed. During this drawdown, the supply of new Treasury bills at auction has temporarily fallen to low levels. The mismatch between the Fed’s QE firehose at a temporary dearth of Treasuries is what nearly drove short-term rates below zero.

Why do I mention all this?

I just wrote several paragraphs loaded with financial jargon. The key takeaway is that the Fed is terrified of changing its messaging on QE or interest rates. The Fed doesn’t want to pop what it is finally recognizing as bubble activities on Wall Street.

We know this because rather than stop (or even “taper”) the volume of QE to limit the glut of reserves in the money market (to prevent negative interest rates), the Fed chose instead to roll out a large reverse repo program to temporarily “sterilize” all the reserves that it had printed in the past.

Also, the Fed likely wants to maintain a heavy pace of QE to ensure that when the Treasury auctions ramp back up to fund future budget deficits, there will be enough buying power at today’s low yields to prevent a repeat of the fall 2019 hiccups in the repo market.

The bottom line is that federal deficits will remain extremely high. In order to fund these deficits at rates that the government (and the broader financial system) can afford, continued Fed QE will be seen as necessary.

As Jim has often noted, the forecasters at the Fed are almost always wrong. Whatever they say their rate policy will be in two years is not what’s likely to happen.

I’ll add this: The Fed might think it has plenty of room to maneuver markets where they want them to go. However, it will likely be increasingly seen in the eyes of the public as constrained. It won’t have the flexibility of action that it used to have. Circumstances and inertia will force the Fed to remain easy whether it wants to or not.

By taking on so many explicit and implicit policy mandates – relating to unemployment, inflation, stock market bailouts, Treasury auction funding, and bank liquidity provision – the Fed may eventually be forced to drop one or more of its mandates in order to focus on the highest priorities.

Very few analysts and commentators mention this, but even though the dollar is still the world’s reserve currency, the U.S.’s foreign creditors still have some power over U.S. financial market conditions. Consider this hypothetical scenario…

A Fed eases aggressively during a future crash in stocks, and a spike higher in Treasury yields will give foreign owners of U.S. Treasuries, corporate bonds and stocks every reason to sell. Foreign creditors would sell because of a heightened risk of a large decline in the exchange value of the dollar.

If foreign creditors sell and repatriate some of the gargantuan asset base that they have accumulated over the past decade, selling pressure on the dollar would be strong and persistent. The Fed would be limited in its ability to hike rates and defend the dollar due to its other mandates.

The net international investment position (NIIP) of the U.S. has gone from -$2.5 trillion in 2010 to -$14 trillion in 2021. That is rarely discussed but will get more attention in the years ahead.

Non-U.S. investor ownership of U.S. assets exceeds U.S. ownership of foreign assets by $14 trillion. Over the past decade, the net inflow of $11.5 trillion in foreign capital into U.S. markets has been a powerful driver of stocks, bonds, and real estate. Yet, it’s rarely publicized.

It has made up for the low U.S. household savings rate. It’s part of the answer to the question, “Where does all the money come from to prop up U.S. financial assets, when the average U.S. household has meager savings?”

Such an environment can’t go on forever. There are practical, political, and national security-related limits to how much of a country’s assets can be sold to foreigners to fund imports. U.S. politicians will recognize this.

Some foreign creditors will also recognize this, and the first to do so will sell and repatriate their capital to get ahead of the risk of capital controls.

Even if that stabilizes and flattens over the next decade, that means roughly $1-2 trillion per year would have to come from U.S. domestic savings to keep Treasury yields, stocks, and corporate bond spreads at current, wealth effect-promoting levels.

And since a trillion-dollar-plus surge in organic household and corporate savings cannot materialize without causing a deflationary depression in consumption, the Fed will feel compelled to maintain a $1 trillion or more per year pace of QE for a sustained period of time.

Tax hikes might be debated but probably won’t be passed on the realization that this would hurt a fragile economic structure.

The unsustainable nature of public and private sector spending, savings, debt, and deficits means that a ton of pressure is going to fall on the Fed to plug gaps. The Fed will be forced into a state of more or less permanent ease, almost regardless of the reported inflation rate.