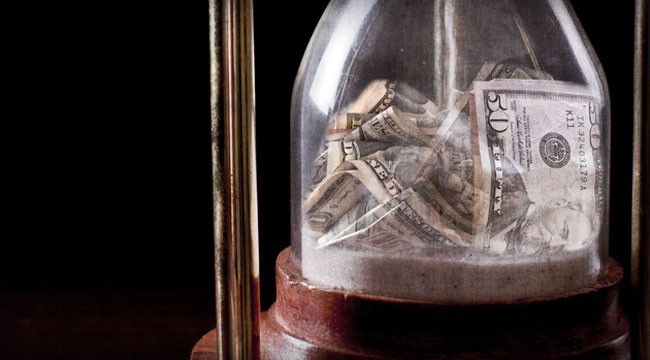 The End of the Debt Cycle

“It’s the end of the great debt cycle,” says hedge fund manager Ray Dalio of Bridgewater Associates, taking the words out of our mouth.

In the past 20 to 30 years, credit has grown to such an extreme globally that debt levels and the ability to service that debt are at risk. […] Why doesn’t the debt supercycle keep expanding? Because there are limits.

In Europe, bond yields are lower than they’ve ever been. Between $2 trillion and $3 trillion in sovereign and corporate bonds now trade at negative nominal yields.Neither Mr. Dalio nor Mr. Gross nor we know precisely where those limits are. But the Europeans and the Japanese are rushing toward them.

We don’t need to tell you that it is unnatural and perverse for lenders to accept a poke in the eye for giving up their valuable savings.

But that’s just part of the perversity of the present system – no real savings are involved. The money never existed in the first place. Getting a negative yield seems almost appropriate, if nevertheless incomprehensible.

Today, banks create “money” from thin air, in the form of new deposits, when they make loans.

As our friend Richard Duncan explains in his book The New Depression: The Breakdown of the Paper Money Economy, by the turn of the new millennium the reserve requirement – whereby banks are forced to hold some cash or gold in reserve against new loans – was so low that it played “practically no role whatsoever in constraining credit creation.”

That means as long as banks meet regulators’ capital adequacy requirements, they can create as much new money (loans) as they want. No risk of mining accidents. No need for anyone to sweat or strain. No self-discipline or forbearance required.

Savers can eat their cake. And borrowers can have it too.

Economists who still have their wits about them – if there are any left – are baffled.

The lowest bond yields in history… and along comes the European Central Bank with a plan to drive them lower by way of €1.1 trillion ($1.2 trillion) of QE.

What is the sense of it?

No one can say. Rather, no one wants to admit that the real motive is to relieve banks of their bad debt.

Banks bought the debt of bankrupt European governments. Everybody knows there is no way governments will pay it back.

Fortunately, when central banks buy government debt, it is effectively canceled – forgotten forever. So, the ECB helpfully exchanges this bad debt for new bank reserves before the public catches on.

Over in Japan the government has been running budget deficits for 25 years – funded largely by Japanese “salarymen” who think they are saving money for their retirements.

What a disappointment it will be when they discover that the money was not saved at all, but spent by their government.

And now, Tokyo’s debts have grown so large that 43% of tax receipts are required just to service its debt, to say nothing of the amounts needed for current and future deficits.

You can imagine how far you’d get if you tried this at home. Try living on 57% of what you earn (the rest goes to pay your creditors)… while still spending more than your income.

See how long that would last…

The Japanese are too polite to mention it, but their public finances are doomed. And it can only be a matter of months – okay, maybe years – before the entire Ponzi scheme blows up.

Since 2009, we’ve been saying that our itinerary was likely “Tokyo… then Harare.”

By that, we meant that we were probably going to experience a Japan-like deflationary slump… and then a Zimbabwe-like hyperinflation.

We are now in year six of that slumpy, lumpy, bumpy ride. The US economy has been growing, but it is the weakest postwar “recovery” on record.

And what little growth we saw was in asset prices. And it was bought with about $4 trillion in central bank stimulus. Few people realize it, but this also retarded real economic growth.

Wall Street is as bubbly as ever. But Main Street is still struggling. Real wages and real business investment, for example – things that mark and measure genuine prosperity – are as limp as a Tokyo noodle.

Prosperity depends on savings and capital formation. You have to devote real resources to new output capacity. You have to hire people and find new and better ways of doing things.

Where did all this money go?

It appears to have gone into share buybacks, mergers and acquisitions, bonuses, fees and other speculator payoffs.

These things benefit the 1% of the 1% – the insiders who are in on the deals. They do nothing for the real economy, except deprive it of the capital it needs to make real progress.

Pop… pop… pop – that’s what will happen to these bubbles.

And when it does, it will complete our travel to Tokyo. That is when our slumpy ride turns into a terrifying train wreck.

Yes, Tokyo deflation before we get to Harare hyperinflation.