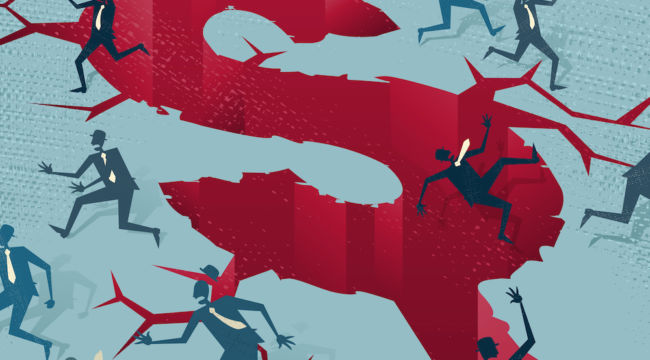 To understand the economic cataclysm ahead, do the math. Those expecting the Covid-19 pandemic to leave the U.S. economy untouched are implicitly making these preposterously unlikely claims:

1. China will resume full pre-pandemic production and shipping within the next two weeks.

2. Chinese consumers will resume borrowing and spending at pre-pandemic rates in a few weeks.

3. Every factory and every worker in China will resume full pre-pandemic production without any permanent closures or disruptions.

5. Not a single one of the thousands of people who flew direct from Wuhan to the U.S. in January is an asymptomatic carrier of the coronavirus who escaped detection at the airport.

6. Not a single one of the thousands of people who flew from China to the U.S. in February is an asymptomatic carrier of the coronavirus.

7. Not a single one of the thousands of people who are in self-quarantine broke the quarantine to go to Safeway for milk and eggs.

8. Not a single person who came down with Covid-19 after arriving in the U.S. feared being deported so they did not go to a hospital and are therefore unknown to authorities.

9. Even though U.S. officials have only tested a relative handful of the thousands of people who came from Covid-19 hotspots in China, they caught every single asymptomatic carrier.

10. Not a single asymptomatic carrier caught a flight from China to Southeast Asia and then promptly boarded a flight for the U.S.

I could go on but you get the picture: an extremely contagious pathogen that is spread by carriers who don’t know they have the virus to people who then infect others in a rapidly expanding circle has been completely controlled by U.S. authorities who haven’t tested or even tracked tens of thousands of potential carriers in the U.S.

These same authorities are quick to claim the risk of Covid-19 spreading in the U.S. is low even as the 14 infected people they put on a plane ended up infecting 25 passengers on the flight.

These same authorities tried to transfer quarantined people to a rundown facility in Costa Mesa CA that was not suitable for quarantine, forcing the city to file a lawsuit to stop the transfer.

Do these actions instill unwavering confidence in the official U.S. response? You must be joking.

Do the math. The coronavirus is already in the U.S. but authorities have no way to track it due to its spread by asymptomatic carriers. People who don’t even know they have the virus are flying to intermediate airports outside China and then catching flights to the U.S.

None of the known characteristics of the virus support the confidence being projected by authorities. The tests are not reliable, few are being tested, carriers can’t be detected because they don’t have any symptoms, the virus is highly contagious, thousands of potential carriers continue to arrive in the U.S., etc. etc. etc.

The network of global travel remains intact. Removing a few nodes (Wuhan, etc.) does not reduce the entire network’s connectedness that enables the rapid and invisible spread of the virus.

Second, what authorities call over-reaction is simply prudent risk management. When an abstract pandemic becomes real, shelves are emptied and streets are deserted. It doesn’t take thousands of cases to trigger a dramatic reduction in the willingness to mix with crowds of strangers. A relative handful of cases is enough to be consequential.

Human psychology is exquisitely attuned to risk once it moves from abstraction to reality. Why take a chance unless absolutely necessary? For many people, the first handful of local cases will be enough to cancel all exposure to optional public gatherings: cafes, bistros, theaters, concerts, etc.

But many of the new jobs created in the U.S. economy over the past decade are in the food and beverage services sector, the sector that is immediately impacted when people decide to lower their risk by staying home rather than going out to crowded restaurants, theaters, bars, etc.

All the official reassurances won’t be worth a bucket of warm spit. After being assured the risk of the virus spreading in North America was “low,” the arrival of the virus will destroy trust in official assurances. People will awaken to the need to control their own risk factors themselves. And as empty streets and shelves attest, people taking charge of risk has dire economic consequences.

Central banks can borrow money into existence but they can’t replace lost income. A significant percentage of America’s food and beverage establishments are financially precarious, and their exhausted owners are burned out by the stresses of keeping their business afloat as costs continue rising. The initial financial hit as people reduce their public exposure will be more than enough to cause many to close their doors forever.

A significant percentage of America’s corporations are financially precarious, dependent on expanding debt and rising cash flow to service their expanding debt load. Any hit to their revenues will trigger defaults that will then unleash second-order effects in the global financial system.

The global economy is so dependent on speculative euphoria, leverage and debt that any external shock will tip it over the cliff. The U.S. economy is far more precarious than advertised as well.

The economic storm hasn’t passed; the false calm is only the eye of the financial hurricane.