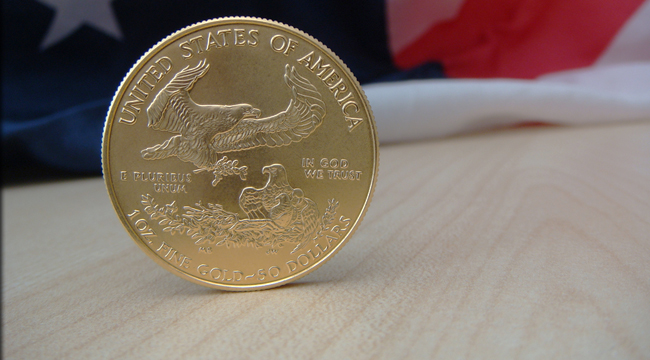 The Eagles Have Fled

The U.S. Mint has been cleaned out of 1/10th-ounce Gold Eagles. So far this month, 85,000 of the coins have exited the Mint’s doors. Now sales are temporarily suspended.

“While the 1-ounce gold bullion coins remain the most popular,” says a Mint statement, “demand for the 1/10th-ounce coins has remained strong too, with year-to-date demand for these coins up over 118% compared to the same period last year.”

Overall Gold Eagle sales this month now total 183,500 ounces. At this rate, April will almost surely end with the second-highest sales on record… and an all-time high is within reach.

Supply remains tight, and the Mint continues to ration sales to its dealer network — as it has since a temporary suspension of sales in January.

One of those authorized purchasers says the wholesale premium for Silver Eagles has doubled this month, to around $4.50 each — not that it’s dented sales a bit. “There’s no cheap silver out there,” says Jim Hausman of The Gold Center in Springfield, Ill.

The Mint says it’s trying to find another supplier of blanks — so far, with no luck. “Currently,” according to Coin World, “the Mint secures finished planchets from Sunshine Mint in Coeur d’Alene, Idaho; Vennerbeck Stern-Leach in Lincoln, R.I.; and GSM Metals in Cranston, R.I.”

The Resurgence of Silver

Why silver should shine brightly in 2021…