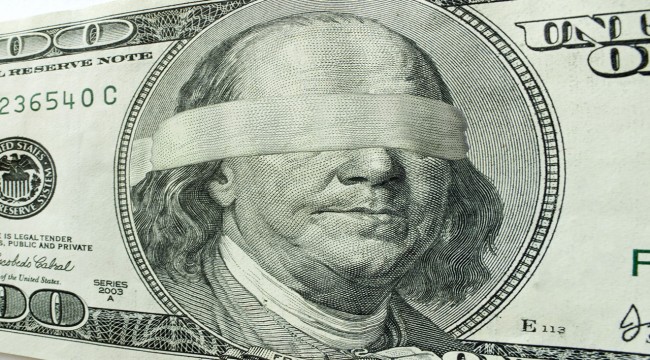 The Dollar Is a Victim of Its Own Success

The use of the dollar as a weapon is not limited to trade wars and currency wars, although the dollar is used tactically in those disputes. The dollar is much more powerful than that.

The dollar can be used for regime change by creating hyperinflation, bank runs and domestic dissent in countries targeted by the U.S. The U.S. can depose the governments of its adversaries, or at least blunt their policies, without firing a shot.

Consider the following. The dollar constitutes about 60% of global reserves, 80% of global payments and almost 100% of global oil transactions. European banks that make dollar-denominated loans to customers have to borrow dollars to fund those liabilities.

Being based in Switzerland or Germany does not allow you to escape from the dollar’s dominance.

A dollar payment going from a bank in Shanghai to another bank in Sydney runs through one of these U.S.-controlled payments systems. In short, the dollar is the oxygen supply for world commerce and the U.S. can cut off your oxygen whenever it wants.

The list of ways in which the dollar can be weaponized is extensive. The U.S. uses the dollar to force its enemies into fronts, crude barter or the black market if they want to do business.

Examples of the U.S. employing these financial weapons are ubiquitous and long precede the draconian sanctions imposed on Russia in the wake of its recent invasion of Ukraine.

The U.S. slapped sanctions on Russia after the 2014 annexation of Crimea and invasion of eastern Ukraine. The U.S. waged a full-scale financial war with Iran from 2011–13 that resulted in bank runs, hyperinflation, local currency devaluation and social unrest.

The U.S. slapped stiff penalties on China for theft of intellectual property. Other obvious victims of U.S. financial weapons are North Korea, Syria, Cuba and Venezuela.

Yet for every action there is a reaction. America’s adversaries realize how vulnerable they are to dollar-based sanctions. In the short run, they have to grin and bear it. But our adversaries and so-called allies are not standing still. They are already envisioning a world where the dollar is not the major reserve and trade currency.

In the longer run, Russia, China, Iran and others are working flat-out to invent and implement non-dollar transactional currencies and independent payments systems. Vladimir Putin proposed a new reserve currency at the recent BRICS meeting.

I’ve been warning for years about efforts of nations like Russia and China to escape what they call “dollar hegemony” and create a new financial system that does not depend on the dollar and helps them get out from under dollar-based economic sanctions. These efforts are only increasing, especially after the Russian sanctions.

No one wants to be next.

You can be confident that gold would play a role in a new monetary order. The use of gold is the ideal way to avoid U.S. financial warfare. Gold is physical so it cannot be hacked. It is completely fungible (an element, atomic number 79) so it cannot be traced.

Gold can be transported in sealed containers on airplanes so movements cannot be identified through wire transfer message traffic or satellite surveillance.

Russia, for example, can settle its balance of payments obligations with gold shipments or gold sales and avoid U.S. asset freezes. Russia is providing other nations a model to achieve similar distance from U.S. efforts to use the dollar to enforce its foreign policy priorities.

Even Europe is showing signs it wants to escape dollar hegemony. The German foreign minister has called for a new EU-based payments system independent of the U.S. and SWIFT that would not involve dollar payments.

SWIFT is the nerve center of the global financial network. All major banks transfer all major currencies using the SWIFT message system. Cutting a nation off from SWIFT is like taking away its oxygen.

The U.S. had previously banned Iran from the dollar payments system (Fedwire), which it controls, but Iran turned to SWIFT to transfer euros and yen in order to maintain its receipt of hard currency for oil exports.

In 2012, the U.S. successfully kicked Iran out of SWIFT. This was a crushing blow to Iran because it could not receive payment in hard currencies for its oil. This pushed Iran to the bargaining table, which resulted in a nuclear deal with the U.S. in 2015.

And of course, the U.S. banned Russia from SWIFT after its February invasion of Ukraine.

But in the longer run, this is just one more development pushing the world at large away from dollars and toward alternatives of all kinds, including new payment systems and cryptocurrencies, possibly backed by gold.

Imagine a three-way trade in which North Korea sells weapons to Iran, Iran sells oil to China and China sells food to North Korea. All of these transactions can be recorded on a blockchain and netted out on a quarterly basis with the net settlement payment made in gold shipped to the party with the net balance due. That’s a glimpse of what a future non-dollar payments system looks like.

The bottom line is the world is looking to turn away from dollar dominance in global finance. Given the severe sanctions regime against Russia, it may end sooner than most expect.

We are getting dangerously close to that point right now.