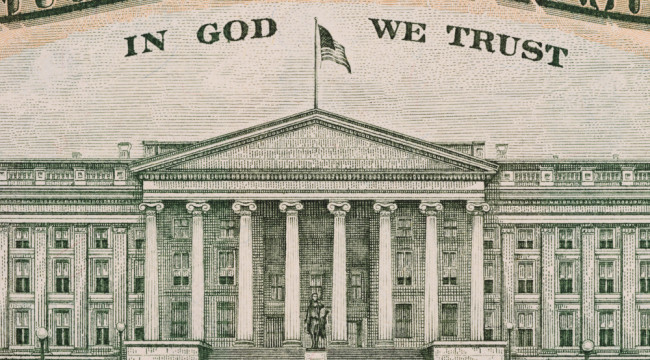 The Debt Piles Up

It’s a headline that inspires false hopes about politicians finally getting their comeuppance.

It seems the U.S. Treasury’s “primary dealers” are saddled with more Treasury debt now than at any time since October 2013. The primary dealers are the 22 big banks and trading firms required to show up at Treasury auctions in exchange for a host of special privileges with the government and the Federal Reserve. 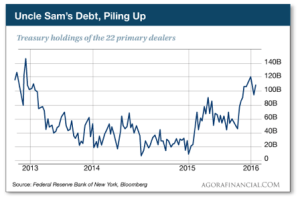 The backwash is accumulating partly because foreign central banks are unloading Treasuries at a record pace — $105 billion in December and January.

It’s so easy — and tempting — to draw the wrong conclusions from this story.

Unwanted Treasuries? “Yes! We’ve reached the tipping point with a $19 trillion national debt! Finally, those foreigners are wising up and dumping Treasuries! Supply is overwhelming demand! Time to load up on TBT, the double-inverse Treasury ETF! I’ll make a fortune shorting Treasuries!”

Hold on, pardner. Once again, you’re falling into the trap of “just world” investing. Yes, if it were a just world, no one would want U.S. Treasury debt and TBT would be a sure bet.

If anything, these developments signal lower yields and higher prices on Treasuries.

Nearly a year ago in these virtual pages, Jim Rickards described a discussion he had with a banker who works with the Treasury Borrowing Advisory Committee — a private group that meets regularly with Treasury and Fed officials to grease the wheels of the Treasury market.

“Jim, it’s worse than you know,” said this highly connected individual. “Liquidity in many issues is almost nonexistent. We used to be able to move $50 million for a customer in a matter of minutes. Now it can take us days or weeks, depending on the type of securities involved.”

Much of that is a function of new rules put in place after the Panic of 2008. Government regulations being what they are, the effect has been to make the system more risky, not less.

But in the event of a dislocation, the most likely result is another “flash crash” like the one that occurred on Oct. 15, 2014 — when the yield on a 10-year note suddenly collapsed — sending prices higher — and then rebounded.

The real problem lies in the spillover effects — as Jim described to us last year.

Let’s return to that inventory of Treasuries held by the primary dealers. “These inventories are financed on a short-term basis,” Jim said, “sometimes overnight, using repurchase agreements — the so-called ‘repo market.’”

The repo market rate is close to the fed funds rate — that is, still less than half a percent. Meanwhile, 10-year Treasuries have traded with a yield-to-maturity of 2–3% since 2013. That’s a handsome spread for a primary dealer who buys 10-year notes and finances them in the repo markets. Leverage the trade 10:1 and the return on dealer equity can be north of 20%.

“But there’s a catch,” Jim goes on. “The dealer is financing a 10-year asset with overnight funds. If the repo rate rose sharply, the dealer could find that its profitable spread disappeared. In a worst case, the spread could go negative and the dealer might have to dump the 10-year note at a loss.”

Sure enough, stresses are showing up in the $1.6 trillion repo market — according to that very same Bloomberg story last week.

“The combination of dealer demand, a global government-debt rally and reduced auction sizes caused a shortage in the repo market for the securities needed to close short positions in 10-year debt. Failures to deliver 10-year notes surged in the week ended March 9 to the most since at least 2013. For all Treasuries, failures reached the highest since the financial crisis, New York Fed data show.”

Long story short, in the three weeks since, these stresses appear to have abated — this time.

But Jim anticipates one day there will be another flash crash in Treasury rates that won’t bounce back — setting off the next financial crisis.

“The solution for investors,” Jim said last year, “is to have some assets outside the traditional markets and outside the banking system. These assets could be physical gold, silver, land, fine art, private equity or other assets that don’t rely on traditional stock and bond markets for their valuation.”

China picks the perfect time to retaliate in trade war… New U.S. tariffs on Chinese goods could take $490 from American households…  The lesson of the seen vs. the unseen…