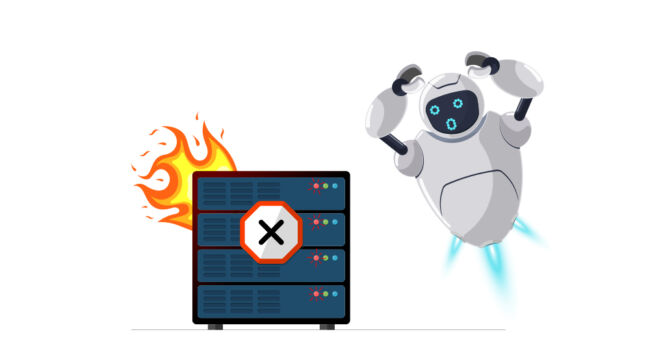 But Twitter? At the end of every day, is there any legacy value in anything that resides within the Twitter ether? If Twitter didn’t exist, would you miss it?

Along those same lines, how did Twitter make most of its money? It’s not like people paid fees for the narcissistic opportunity to demonstrate brevity and wit a la Twitter, let alone for the right to insult each other within the 280-character allowance.

Heck, Musk has floated the novel idea of charging prime users the grand sum of $8 per month to use the service, and people screamed like stuck pigs.

The answer is that pre-Musk, Twitter made its money via ads from a stable of sponsors; and as Musk is now learning, that stream can run dry in a hurry.

Which brings us to others in the “tech” space, most of them familiar names. Consider two of the largest, Meta (formerly known as Facebook) and Alphabet (the parent company of Google).

They make their bucks via ad revenue, by popping up annoying distractors tailored to user data that they gather from you whenever you click a link or hit the “like” button or such. Heck, they brag that they know you better than you might know yourself.

Now, keep in mind that there’s only so much ad revenue to go around. And in the olden days, companies that wanted to sell wares spent much of their ad revenue in old-fashioned info-systems like newspapers and magazines. But over the past decade or so, much of that spending has migrated online and away from the paper products.

That spending migration is a big part of why you may not have a local newspaper anymore; that is, it went out of business. Or it helps to explain why what remains of your local newspaper, if you have one, fills much of its space with reprinted news feed from big media shill mills like Associated Press, Reuters or such.

The ad money of old no longer funds the downtown newspaper, but instead stuffs the coffers of those soulless California tech behemoths. While far fewer traditional, shoe-leather reporters are out covering school board meetings or reporting from criminal court or the county council meetings.

Meanwhile, for the past decade the stock market has been driven by tech-tech-tech. People everywhere talked about alleged “wealth creation” and how well their future retirement accounts were doing because the share price for Facebook, Alphabet, etc. went up-up-up. Here’s the chart of just those two mega-names: 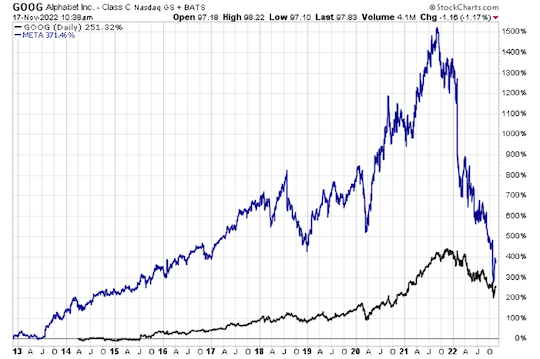 As you can see, both Facebook (pre-name change) and Alphabet were market darlings, climbing inexorably until this year. And then, whoops… came the sell-down in 2022. What’s with that?

Well, much of the past 10 years has been a time of low-low-low interest rates, too. Down at zero for much of the time, and definitely negative yields when you factor inflation. And when the Federal Reserve began raising interest rates earlier this year, the air left the balloons.

Indeed, at one point pre-2022, Facebook sported a market cap over $1 trillion (yes, with a “t”). Now, the company’s market cap is under $300 billion (with a “b”), or about the same as the combined values of oil companies Shell and BP put together.

And let’s ponder that for a moment…

If Meta disappeared in a puff of smoke, would it really matter? Would your life change all that much, aside from the cute-kitty/puppy posts and such? Whereas, what would happen to global energy markets and gasoline prices at the filling station down the street if BP and Shell just simply vanished? Well, that question kind of answers itself.

Meanwhile, what does the loss of over $700 billion in Meta’s market cap look like? Let’s do some more math.

Does this seem to you like the dynamic of a real company that makes and sells real things? One that creates true value for its customers?

And it’s all coming home now. Twitter is in the hands of Herr Musk, who is trying to figure out how to keep the lights on. Meta has cratered this year. Alphabet has taken a dive as well. And many more tech plays are sliding down the slippery slope. Here is an abbreviated list of job cuts across the name-brand tech sector:

In addition to these, Amazon has announced a hiring freeze, Apple has paused almost all hiring, and Alphabet is reducing new hiring by 50%.

You get the picture, right? The salad days of tech-tech-tech are ending. Part of it is rising rates and the Fed dialing back its past support of upward-trending markets. And part of it appears to be a collective realization that much of that Silicon Valley tech vaporware just isn’t very good, nor worth very much in the long haul.

So out in the markets people are bailing, and looking for other shiny things in which to invest.

This brings us to hard assets. I’ll keep it terse here and just lump everything into traditional ideas like energy and mining. Oil, gas, even coal. Gold and silver as precious metals. And copper, lead, zinc and a host of other metals that truly make the world work (just try running the world without them).

The takeaway is that the era of tech hype is ending. Reality has caught up with the smoke and mirrors. As 2022 ends, it’s time to get real and get into hard assets, because that’s where the world is headed.

It’s what will be valuable and retain value in the world that’s unfolding before us.