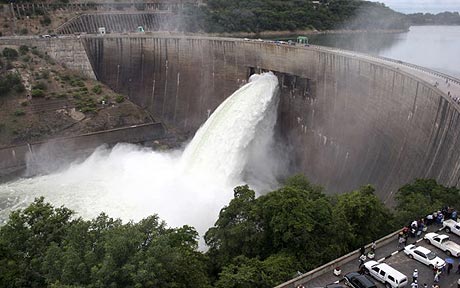 “The Dam Is Breaking”

“We got the bearish signal… The dam is breaking. You can feel it.”

The ursine signal, according to bond fund manager Jeffrey Gundlach: The S&P 500 slipped below 2,130 on Monday and the previous Friday. Then it closed at 2,111 yesterday. It’s down another thirteen points today, we add en passant.

If Gundlach is right and the dam’s about to break, it could break hardest on Hillary. The S&P’s performance between July 31 and Oct. 31 has proven a reliable crystal ball on elections since WWII.

“Going back to World War II,” notes Sam Stovall, chief investment strategist at CFRA, “the S&P 500 performance between July 31 and Oct. 31 has accurately predicted a challenger victory 86% of the time when the stock market performance has been negative.”

And the crystal ball’s showing a Trump win…

More omens gathering for Trump: Gold’s soared over 2% since FBI director James Comey’s announcement last Friday. It spiked almost $18 today alone, to $1,309. Many consider a vote for gold a vote for Trump.

And the Mexican peso — another Trump fortune teller — is getting shellacked today. It plunged to its lowest level in over a month.

The very stars and planets can be seen aligning for Trump…

Yesterday’s ABC News tracking poll gave Trump a one-point lead over Hillary nationwide. That’s the first time he’s posted a lead in that poll since May.

Meanwhile, the RealClearPolitics average of recent polls now has Trump just 2.2 points behind. Hillary had a seven point lead only two weeks ago.

Pat Caddell is a veteran Democratic pollster. And sticking to today’s dam metaphor, he sees a lot of aqua in Hillary’s future:

“This dam is about to break,” he told Fox News.

Caddell’s predicting Trump by landslide (or deluge?). He sees this election much like the 1980 campaign when Reagan came from behind late to win.

Jim Rickards is also calling the election for Trump — with a caveat: “Our expectation is that Trump will win the election on Nov. 8. However, that forecast is a close call. The election will be close, and Clinton could win despite our expectation.”

Whoever wins, WikiLeaks really flustered the fish with its job on Hillary…

The CBOE Volatility Index — VIX, or the market’s “fear gauge” — has risen each of the past six trading sessions alone, advancing on the surging tide of electoral uncertainty. It spiked at 20.43 yesterday, before settling down to end at 19.32 today.

On Oct. 18, Jim warned, “any indication that Trump is pulling even — due to Clinton email leaks, health issues or a final debate stumble — will send the stock market into a tailspin.”

Seems Jim’s got his own crystal ball polished up nice and shiny.

We see the Fed punted on a rate hike today — to the shock of someone, somewhere, maybe. But they meet again next month. And Fed fund futures are now predicting a 78% chance of a hike — up from 60% before today’s yawner.

Sticking with today’s metaphor, we don’t know if the dam is going to break tomorrow… next week… or over the next few months. Or if it’s going to break at all, for the matter of that.

But it sure seems the pressure’s building… and by the day, too.