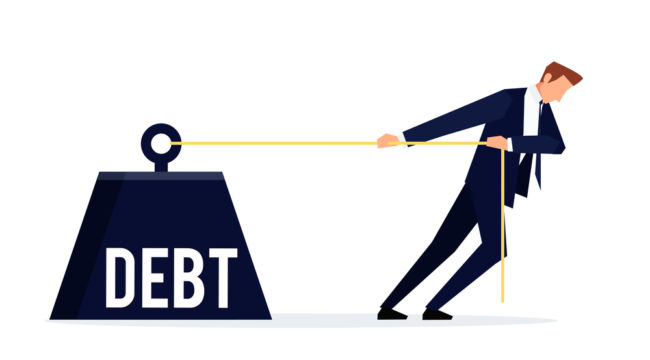 The Curse of Debt

I’m not a fan of debt, or at least excessive debt. It’s one thing to borrow funds in order to gain a higher return on them than your borrowing cost would be. But it’s quite another to owe more than you can hope to cover without borrowing more. It’s even worse when you make overoptimistic assumptions about conditions that will lead to paying down that debt.

I left investment banking after a decade and a half in the industry working at four of the world’s major banks. Two of the four banks, Bear Stearns and Lehman Bros., were destined to implode.

That’s precisely because they overleveraged themselves, taking on too much debt to bet on risky credit instruments. These credit instruments included subprime loans, credit derivatives and Wall Street’s version of a debt buffet called CDOs, or collateralized debt obligations.

I lost a lot of money when Bear Stearns failed in March 2008, and shareholders were bought out at a small fraction of the peak stock price.

That’s not because I was working there at the time. I wasn’t. The firm nearly went bust about eight years after I left to work at Goldman Sachs and later become a journalist and whistleblower about corrupt financial practices in banking.

When Bear Stearns’ trading counterparties panicked about the growing likelihood of a bankruptcy filing, its stock price plummeted. I still owned stock options in the firm that I had carefully saved by tucking away a portion of my compensation into them over the years.

The value of my options went to zero.

JPMorgan ultimately absorbed Bear’s balance sheet, initially offering $2 per share. The offer was revised up to $10, but the damage was done. It was a tiny fraction of Bear’s stock price of $170 just a year earlier.

So needless to say, taking on too much debt — as Bear Stearns did to run its toxic asset operation — is very personal to me. And personally, I believe too much debt means too little fina‌ncial freedom.

Too much debt can also weight on economic growth, whether for a company, a country or the entire world. If companies must siphon off money to repay debt before focusing on growth, it diminishes the capital available to fund growth projects.

Done strategically, that’s not necessarily a bad thing; it means borrowing now to grow even more in the future.

But if that borrowing is based on unrealistic expectations, it can compound negatively with other economic or geopolitical uncertainties. Today, these include the ongoing U.S.-China trade wars, the impending cloud of Brexit in Europe, U.S. elections and general Washington turmoil, Middle East tensions and the weak state of the global economy as a whole.

The International Monetary Fund (IMF) recently downgraded its view of global growth in its latest biannual Global Financial Stability Report. In fact, the IMF predicted that growth for 2019 will be at its weakest since the 2008 financial crisis, primarily due to widening global conflicts.

The report was issued in time for the fall meetings of the IMF (which cover 189 member nations) and the World Bank that began this week. As a subset of those meetings, the G20 finance ministers and central bank leaders will also convene to primarily discuss the negative ramifications of trade wars and other factors hampering the world economy.

However, the main function of those two entities is to evaluate the need for, and to lend money to, countries and projects that need it. In order to do that, they have to consider factors that influence these nations’ economies, such as trade wars, growth forecasts and associated uncertainty.

Recent market volatility is due in part to the market’s understandable skepticism that the trade “deal” President Trump announced last Friday is meaningful. As one of a series of so-called truces against a list of tit-for-tat tariffs between the U.S. and China, it might not mean much.

Good intentions could fall apart at any moment, as they did this past May and August.

For instance, when he announced a “phase one” trade agreement with China last week, President Trump also declared that it constituted “the greatest and biggest deal ever made for our Great Patriot Farmers in the history of our Country.”

Yet U.S. farmers might not fare so well, no matter what happens with that agreement. That’s because the deal calls for China to buy up to $50 billion a year in American farm products.

That goal might prove unattainable. It’s more than the peak of China’s past imports. Chinese imports of U.S. soybeans, pork and other agricultural products hit a high of $29 billion back in 2013. Due to the trade wars, that figure dipped to below $9 billion for 2018.

When President Trump first hit China with tariffs last year, he promised it would lead to a better bilateral trade deal for U.S. companies within China, and that it would reduce the U.S.-China trade deficit.

Instead, the ongoing battle of wills and egos between the U.S. and China has simply increased market anxiety and decreased economic growth.

Every time President Trump tweets or says he’s struck a trade truce with China, stocks soar. When he walks it back, or China retaliates, markets dive. That’s no way to have trade stability. For companies that rely on trade, volatile trade relations increase their own problems.

In addition to focusing on the negative ramifications of trade wars and related uncertainty, the IMF also warned of the pitfalls of too much corporate debt.

The IMF has stressed its concern about high levels of risky corporate debt before. But now the IMF admits that global central bank policies to lower interest rates in order to stave off immediate economic risks have made the situation worse.

Their actions have led to “worrisome” levels of poor credit-quality debt as well as increased financial instability.

It noted that 40% of all corporate debt in major economies could be “at risk” in the event of another global economic downturn, with debt levels greater than those of the 2008–09 financial crisis.

Much of that has been related to dark money making debt cheaper to acquire.

For nearly a decade, the world’s central banks have been printing tens of trillions of dollars of “money.” The “Big Three” central banks — the Fed, the European Central Bank and the Bank of Japan — have collectively held rates at a 0% average since the global financial crisis began.

The amount of securities they held on their books alone in 2017 was nearly $14 trillion, equivalent to a staggering 17% of global GDP.

The result has been to inflate a massive debt bubble. The world’s debt pile sits near a record $244 trillion as of the beginning of this year.

That’s three times the size of global GDP. It means that for every dollar of growth, the world is borrowing three dollars. The global debt-to-GDP ratio exceeded 318% in Q3 of 2018. Plus, right now, U.S. corporate debt stands at $10 trillion. That’s the equivalent of 48% of U.S. GDP.

It’s not sustainable. But that doesn’t mean the central banks won’t try to keep it going with lots of dark money.

It could work for a while, until it doesn’t.