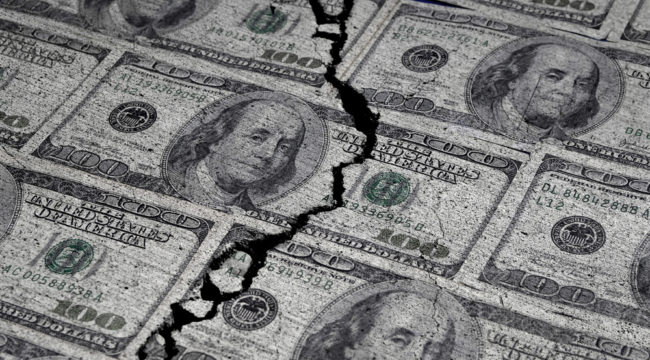 The Curse of Cash

George Orwell didn’t have Ken Rogoff in mind when he said that some ideas are so absurd that only an intellectual could believe them. But he may as well have…

Rogoff — big brain, Harvard economist and card-toting member of the global monetary elite — has just released a brand-new book called The Curse of Cash. From which:

The massive quantities of cash circulating today… are a huge public policy problem that needs to be urgently discussed, not taken as an immutable fact of life.

Do you consider your cash a “huge public policy problem?”

Rogoff does. Authorities can’t track it — or tax it. It’s therefore the choice of terrorists, drug dealers, organized crime, tax dodgers and hellcats everywhere. The angels themselves holler against it.

Rogoff wraps his case in the flag. Of course. That’s how you hook the rubes.

Rogoff’s real agenda? To hand central banks complete control of the economy. Give them the power to make negative interest rates work. The purpose of negative interest rates is to turn money into a hot potato. Hold it for more than a second and get burned. So you spend it, just to avoid the burn. On what? No matter, really. Enough people do it and the economy roars back to life.

Cash pays zero interest. And the banks can’t impose negative rates to stimulate the economy when the rubes can simply withdraw their cash from the bank. Withdrawing cash and getting nothing beats the daylights out of keeping it in the bank and being charged for the privilege.

Rogoff, minus the crocodile tears about crime and terrorism: “Paving the way for unfettered and fully effective negative interest rate policy ought to be thought of as a major collateral benefit of phasing out paper currency.”

Not quite as civic-minded, is it?

Your money would no longer be yours in the ultimate sense. And central banks would have the power of kings. No… a king is an ant in comparison. No king ever had this sort of power. But Rogoff says that’s “a major collateral benefit of phasing out paper currency.”

Jim Rickards has said speeches, articles and books like these are signals elites use to coordinate policy amongst each other. They’re like dog whistles, only they’re out in the open for all to hear. But few people do.

And Jim has called The Curse of Cash nothing less than “an elite manifesto for the final elimination of cash.” Here Jim rips back the lid on the entire scheme:

The real reason is the power elite want to abolish currency so they can force everyone into the digital bank system. Once everyone is forced into the banks, it’s easy to impose negative interest rates to confiscate your money. Paper money is the best way to avoid negative interest rates. So paper money must be abolished before the elite plan can be implemented. A cashless society forces everyone into digital bank accounts than can be taxed, frozen or stolen by negative rates. Getting savers into digital accounts is like rounding up cattle for the slaughter.

Would it shock you that Ben Bernanke endorsed Rogoff’s book? A leading question, of course: “A fascinating and important book. Kenneth Rogoff sets out a compelling and wide-ranging argument for weaning our economies off paper money,” says Ben.

“This is not a book to be tossed aside lightly,” LA Times sports columnist Sid Ziff (or was it Dorothy Parker?) supposedly wrote about a book he reviewed — “it should be thrown down with great force.”

The Curse of Cash is a book to be thrown down with great force.