The Currency that is Winning the "Race to the Bottom"

Many consider deliberate currency devaluation to be a tool that can help jump start a nation’s economy. The aim of such a practice is to increase exports while encouraging domestic purchases by making goods outside of the country relatively more expensive.

However, like any good prisoner’s dilemma, this might be the case if only one country acted in isolation. The reality is that many major countries engage in the same policy, and the end result – as the infographic details – is a race to the bottom.

So far the “winner” in the race is Japan. The BoJ has been rolling with the Abenomics plan for almost two years now and the results are in…

The BoJ’s balance sheet has since exploded in size and they also have the highest public sector debt in the world. 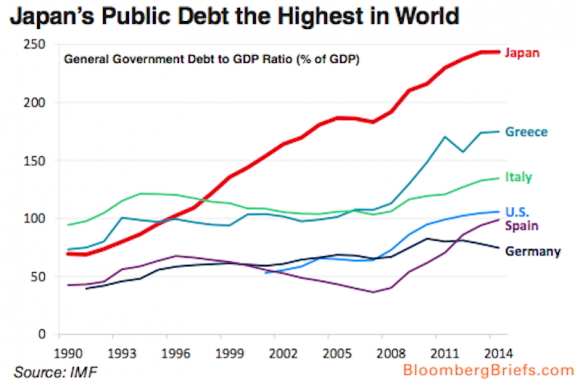 Jeff Desjardins
for The Daily Reckoning

Ed. Note: No matter which currency wins the “race to the bottom” there will always be a safe place for your money. So where is the safest place for you to protect and grow your wealth? Sign up for the FREE Daily Reckoning email edition, right here, and you could soon discover a wide variety of them – including unique opportunities to learn real, actionable investment advice.

This infographic originally appeared on the Visual Capitalist website.