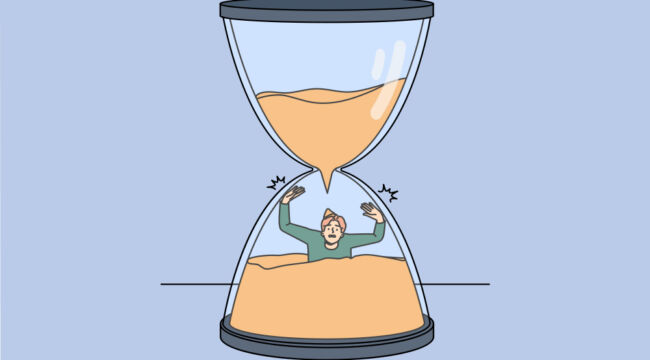 Uncle Samuel has rammed his whelky head against the “debt ceiling” — the debt ceiling set presently to $31.4 trillion.

Unless Congress votes to haul the jacks out of storage… and elevate the ceiling once more… the United States government can issue no additional debt… and risks default as its cupboards run bare.

Come the evil day when the china is at last depleted…

Every manner of calamity would ensue. Chaos and Old Night? Here you would have them and then some.

The federal government would slam its door on the noses of the American people. They would be forced upon very lean rations and thrown into severe desperation.

Meantime, the federal government’s creditors would go scratching as it defaults on its debt. Economic woe would spread and spread in ever-widening circles — even to the world beyond.

Run for the Hills!

The U.S. hit the debt ceiling set by Congress on Thursday, forcing the Treasury Department to start taking extraordinary measures to keep the government paying its bills and escalating pressure on Capitol Hill to avoid a catastrophic default… fears are growing that the partisan brinksmanship could result in the nation defaulting on its debt for the first time ever…

Treasury Secretary Janet Yellen wrote a letter to House Speaker Kevin McCarthy Thursday, informing him that the nation’s outstanding debt is at its statutory limit of $31.4 trillion and that the agency will implement extraordinary measures so it doesn’t default on its debt, which would have enormous consequences on the U.S. economy, global financial stability and many Americans. She said the measures would last through June 5.

That is, Ms. Yellen estimates she maintains the wherewithal to keep the government apparatus in funds through June 5, approximately.

This she will accomplish through the application of “extraordinary measures.” Of what will these consist? CNN:

As part of the debt issuance suspension period, the agency will begin to sell existing investments and suspending reinvestments of the Civil Service Retirement and Disability Fund and the Postal Service Retiree Health Benefits Fund. Also, it will suspend the reinvestment of a government securities fund of the Federal Employees Retirement System Thrift Savings Plan.

How the nation can endure such privations as these, we do not know. Yet we must discover ways to gutter along as we can.

Our hearts are particularly with the civil servants, postal servants and federal employees who will absorb the heaviest blows.

They suffer mightily as is. Simply ask them — and they will tell you. Now reinvestment into their health and retirement funds are being suspended to meet higher obligations?

Yet we cringe most for our nation’s reputation. And its dignity.

The world’s greatest power simply cannot be permitted to careen into default. As Ms. Yellen pleaded in a letter to Congress:

I respectfully urge Congress to act promptly to protect the full faith and credit of the United States.

As well act to protect the virtue of a streetwalker. Here is the Treasury secretary’s argument, stripped to its core:

So what, so what?

We must defend our virtue — even at the very price of our soul.

The Bad Guy Is the Good Guy, and Vice Versa

If you attempt to impose a halt on the business? You are a reckless and irresponsible hellcat willing to risk the full faith and credit of the United States — such as it is.

That is, the grand villains of this tale are not the spenders who bust through debt ceilings and plunge the nation deeper into debt.

It is instead the prudent and fiscally responsible fellow. It is the concerned caretaker of the nation’s finances. It is the honest and earnest man after a sound and sustainable accounting.

This is our national fee-fi-fo-fum. He must be locked in a cage. Else he risks the full faith and credit of the United States. He will plunge us into the unfathomable abysses of default.

The calamity-howlers are hawking a false tale, argues David. Failure to elevate the debt ceiling does not equal default.

Do not forget, the federal government hauls in loads of tax money each month. It can meet its debt obligations with these monies.

It may endure something of a squeeze, yes. But it will not fall into default.

Failure to raise the debt ceiling absolutely does not mean default. In the most recent month, Uncle Sam took in about $252 billion of receipts, or 5.4 times the $47 billion monthly cost of net debt service. The great beltway lie is that the president is powerless to make these interest payments from available receipts.

In fact, rather than prioritizing other spending and allocating the remaining revenues to those priorities, it’s claimed the president must sit on his hands, making default unavoidable and instantaneous.

A “damned lie,” David calls it.

Here David radios in support from Mr. Mick Mulvaney. Like David before him, Mr. Mulvaney is a former congressman who also commanded the Office of Management and Budget.

This is what this fellow said about the October 2013 debt ceiling “crisis”:

We’re not going to default; there is no default. There’s an [Office of Management and Budget] directive from the 1980s, the last time we got fairly close to not raising the debt ceiling, that clearly lays out the process by which the Treasury secretary prioritizes interest payments.

Are you not convinced? Here David  conscripts into his cause the very “dean of liberal constitutional experts,” Harvard Law School’s Laurence Tribe:

Simple as pie, yes — in theory. Yet in practice? Harder than Damascus steel.

How many congressmen will agree to scissor the credit card upon which their political career depends?

The question is the answer. As David argues with great precision:

The Imperial City fears these words more than Dracula feared a glittering crucifix.

Yet we are extremely confident that Imperial City will emerge victorious. Certain House Republicans will raise a rumpus. They will do a lot of shouting against elevating the debt limit.

Yet they will be cried down. The debt ceiling will be elevated — certainly by June 5. Depend on it.

And so the soda can will go kicking down the road… once again. If wrong, we will devour these very words, without salt.

Yet we depart with a biblical injunction against profligacy, for we fear divine retribution. It is our sincere wish that Congress take it aboard — though we are certain it will not:

“The wicked borroweth, and payeth not again.”