The “Contrarian” Look Ahead

A shaft of sunlight cracks through the gloom… fresh, invigorating winds scatter the murk… and the Kingdom of Heaven is in view.

For the United States and China have agreed to resume trade negotiations. Discussions are scheduled for next month in Washington.

And so the hopes of a truce kindle anew.

Across the Atlantic Ocean, a hard “no deal” Brexit appears less likely today.

New Prime Minister Boris Johnson is prepared to cut Great Britain loose from the EU without a negotiated settlement. But it appears Parliament has taken away his scissors.

The market is rootless, cosmopolitan… a citizen of the world.

Meantime, white doves of peace appear in the skies over Hong Kong.

Hong Kong Executive Carrie Lam has withdrawn her “controversial” extradition bill behind the recent protests. Under its terms, a scoundrel arrested in Hong Kong could be deported to China.

Now the bill has gone upon the shelf. And the protesters can disperse.

The odds of a hard Chinese lesson in the perils of civil disobedience have accordingly plunged.

And so the market had itself a wondrous day at the races.

But no more of today. What can you expect from markets for the duration of 2019?

It takes a dim view of crowds… and has contrarian leanings. When prevailing conditions are bullish, it shouts “sell.”

When prevailing conditions are bearish, a “buy” command goes out.

This Bull & Bear indicator is a crystal ball of remarkable accuracy.

It has given 11 sell signals since 2002. Each rang dead center, bull’s-eye, as stocks subsequently tumbled on each occasion.

In January 2018, for example — when the stock market was running riot — this indicator saw dark omens gathering.

Two weeks later the stock market plunged into correction terrain (we doff our cap to analyst “The Heisenberg” for reminding us).

What is this frightfully accurate indicator advising today? 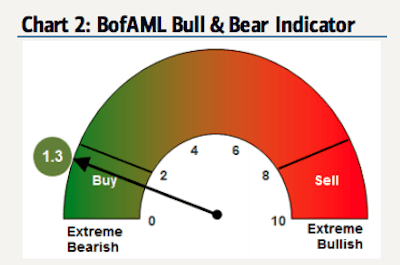 Buy, because recent bearish sentiment has investors steaming for safety. And they are all loaded up on one side of the vessel.

And you rarely veer wrong wagering against the crowd.

We are bullish on risk assets in 2019 as bearish investor sentiment and the irrationality of central banks and bond markets allow an “overshoot” in credit and equity prices this autumn.

So perhaps it is time to cast your bread upon the waters… and adventure your money in the stock market.

But you may wish to haul it back in before the new year.

That is because this Hartnett and his fellows have the tide reversing in 2020. And the outgoing flood will take a great deal of stock market money with it.

A “Big Top” will precede it:

We are bearish on risk assets in 2020 as recession/policy impotence/bond bubble risks induce Big Top in credit and equities.

But let us cast our gaze beyond the immediate horizon…

Are you prepared for the contrarian trade of the next decade?

These Bank of America crystal gazers have picked it out:

“The most contrarian trade in the 2020s is [going] ‘long inflation,’” says Hartnett.

He further eyes the coming of Modern Monetary Theory, universal basic income, higher taxes and boomtime for commodities… among others.

Of course, we take no official position here at The Daily Reckoning — although we slant in certain directions — and away from others.

We merely thumbtack the information to the community bulletin board and walk away.

You are free to stop for a closer look… or pass indifferently by, as you choose.

But if inflation roars next decade, gold should have a gorgeous run ahead. Jim Rickards has gold going to $10,000 an ounce.