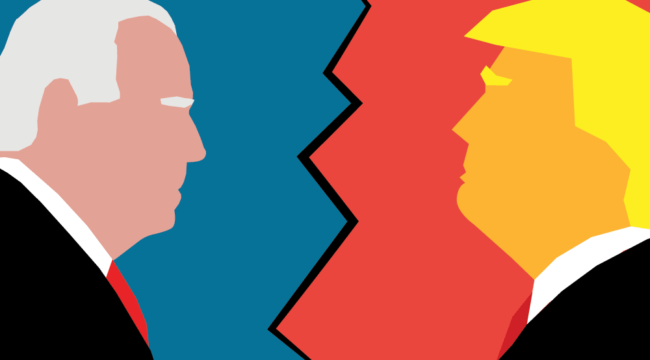 I’ve argued recently that Joe Biden’s dramatic cognitive decline will force Democratic Party leadership to deny him the nomination and replace him with someone else. I stand by that. But today let’s just assume that Biden is the actual nominee. What’s the case for a Biden win in November?

The case for Biden begins with the dismal state of the economy. Only three presidents in the past 100 years have lost a reelection bid: Herbert Hoover in 1932, Jimmy Carter in 1980 and George H. W. Bush in 1992. What they had in common was a recession close to the election. All presidents who sought reelection and did not have a recession won.

Trump was in the “no recession” category and headed toward an easy reelection until last February when the pandemic hit. Now, Trump is in the same category as Hoover, Carter and Bush 41 and possibly headed toward a recession-related defeat.

Second-quarter GDP, which collapsed at a 32.9% annualized rate, certainly didn’t help Trump. The fight is made worse by the fact that we’re not just in a technical recession (in fact, the recession may be over already), but we’re in a depression that may last for years.

The official unemployment number ignores individuals without jobs who were subject to misclassification in the statistics gathering, and those who don’t have jobs but are not actively looking. There’s also a category of those working part-time involuntarily, who would prefer full-time jobs.

When you include family members of those losing jobs, the adverse impact of unemployment has hit more than 50% of the U.S. workforce directly or indirectly. This is an economic disaster and it feeds the perception that Biden can do better on the economy than Trump.

Biden has selected Kamala Harris as his choice for Vice President. She has credentials that are more progressive and left-wing than Biden himself. She’s reliably left on issues such as health care, guns, abortion, the environment, etc. The choice may hurt Biden with some swing voters, but it will sit well with the Bernie Sanders wing of the Democratic Party and solidify Biden’s base and his fundraising ability.

Here’s another factor that weighs in favor of Biden: Trump himself.

The world has changed, but Trump has not. He’s still running around talking about “Sleepy Joe” and “Crooked Hillary” and “Dirty Cop James Comey,” and nobody cares. Trump talks about the stock market and nobody cares. All people care about is the virus and their jobs or businesses. Trump is trapped in the White House bubble and is isolated. He has lost touch with the American people. The people have noticed.

Trump’s been sleepwalking through this campaign. And that’s a good way to lose.

Trump has also not articulated a vision for his second term. The first thing I learned when I was a Washington lobbyist is: “You can’t beat something with nothing.” Biden may be a weak candidate, but at least he puts out policy positions on a regular basis.

You may agree or disagree, but he’s articulated what he wants. Where is Trump’s policy for a second term? What will he do on taxes? Will he make friends with China or reignite the trade wars? What happened to The Wall?

Last month, Biden announced a Buy American campaign. That’s a major embarrassment for Trump. Buy American is supposed to be one of Trump’s bread and butter issues. How on earth did Biden beat Trump to the punch in terms of announcing a Buy American plan? Trump should own the issue, but now Biden does.

Trump’s big campaign innovation in 2016 was the stadium rally. He did them all over the country to huge audiences and they worked. But, that tactic is now neutralized by the lockdowns.

Trump is trying to run the 2016 playbook, but it’s not 2016 anymore and it’s not even the same world we lived in last February. Everything has changed; Trump hasn’t.

He had a chance to attain the stature of FDR in the Great Depression or Ronald Reagan at the end of the Cold War. Trump missed his chance because he did not understand the historical change that has taken place in the past six months.

In summary, the world has changed but Trump has not. He’s out of touch with the American people. He’s not responding to their needs. He’s not offering comfort, confidence or leadership.

Trump is headed for defeat unless he can execute a 180-degree turn in a matter of days, not weeks. The outlook is not promising for Trump. It is for Biden. Biden also shows a sizable lead in the polls.

The Case for Trump

But despite Trump’s many blunders and Biden’s solid lead in the polls, there is cause for optimism in the Trump camp. Trump’s approval rating is 43% and his disapproval at 55%. That’s a huge 12-point spread against Trump.

Trump can narrow this spread and gain support if he demonstrates the kind of leadership he did in the early days of the COVID-19 pandemic.

As important as the spread is the base. Despite volatility in the “Disapprove” category, Trump has shown resilience in the “Approve” category. His base level of support has not dipped below 40% since early 2018, and has frequently been higher.

The 40% approval level is not quite enough to win the election, but it is a rock-solid foundation on which to build. With 40% to count on, Trump only needs to add about 8% of the voters to win (Trump can win with less than 50% of the total votes provided he wins key states. This is what he did in 2016). An 8% pick-up is a tall order, but not too much to accomplish if Trump can steady his campaign and stay focused.

Parscale is brilliant at social media marketing, but was in over his head as a campaign manager. Stepien is a more seasoned political professional who helped Chris Christie win a tight race for governor of New Jersey in 2009 and worked in the Trump campaign war room in 2016. With Stepien in the lead role and Parscale remaining in his social media niche, this represents a significant improvement in the Trump campaign’s prospects.

Trump also has a funding advantage. Combining all sources reveals that Trump has access to $273 million of immediately available funds while the comparable amount for Biden is $214 million, giving Trump a $59 million advantage. Of course, both campaigns are raising money at a furious pace and these totals will change, but for now the advantage clearly goes to Trump.

Trump also has a larger database and a more sophisticated digital media operation. In 2016, Trump leapfrogged the Democrats with a second-wave tech advantage involving targeted ads on Facebook and Google with micro-tagging that reached down to individual streets and homes.

The Democrats have tried to catch up, but for now the Republicans maintain the edge, and this will work to Trump’s advantage in closely contested swing states such as Michigan, Pennsylvania and Wisconsin.

In summary, Trump has advantages in money, technology, incumbency and a more energetic campaign style. His disadvantages include his handling of the pandemic, the recession and his inability to use his natural advantage in the mass rally format due to pandemic lockdowns.

Trump can overcome these disadvantages with a clear message about his plans for a second term. If he can articulate those plans and maintain a messaging focus beginning immediately, he can win a close election.

But he has no time to waste and little margin for error.