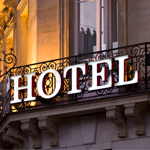 The Case for Hotels

Back in the heyday of the bubble, people could (and did) buy hotels and put big mortgages on them. Just as with housing. Now those loans are coming due. And guess what? Borrowers can’t afford them anymore. They have to come up with cash or sell, much like troubled homeowners. So an extraordinary opportunity exists to buy hotels today. Let’s take a look.

From about 2005-2008, you could say the market was in a drunken, debt-fueled stupor. Bankers funded lavish loans to buy hotels based on a sunny outlook that turned instead to rain. The terms of these loans usually had maturity dates of five-seven years from issuance. In 2012, about 27% of these loans from the boom years come due.

According to Morningstar, this pool of hotel loans was about $70 billion at the end of 2011. About 10% of them are already delinquent. About a third of them are on a “watch list” — which is banker talk for “I’m worried about the ability of the hotel to pay.” In short, there are a lot of troubled hotels.

Banks hatched these loans on rosy assumptions, as I’ve said. Banks made the loans at low interest rates and funded a high percentage of the properties’ then-inflated value. The current hotel market is not as strong as it was in 2007. Property values have come down. Many hotels are 20-40% less profitable than they were at the peak. Plus, today’s lenders are more sober about credit risk. Today, you probably couldn’t finance a hotel by borrowing more than 65% of the now-depressed value. In addition, banks charge higher interest rates for such loans than in 2007.

So what’s happening is that those maturing loans from that bubbly era can’t support the debt based on today’s lending standards. If you are a borrower, you have two choices. You either cough up the cash to pay the debt down or you sell.

If a borrower chooses the latter, then there is a great opportunity for a well-funded buyer to come in and get a deal. The best deals come from people who have to sell.

Beyond the loans coming due, we’re in a good part of the cycle for hotels. To understand hotel cycles, you have to think about hotel supply and demand.

When Lehman Bros. went belly up in September 2008, it pretty much froze the credit markets like Old Man Winter’s icy breath on Lake Superior. It doesn’t happen often, but when it does, it is a crusher. Borrowing money for anything was almost impossible.

As a result, new hotel construction slowed to hardly anything at all. Normally, the hotel industry adds about 75,000 rooms per year — a roughly 2% growth rate. By 2011, hotel supply grew by fewer than 25,000 rooms. The chart below gives you the ebb and flow of hotel rooms from 1988-2011. You want to be in hotels at the troughs. You want to sell hotels at the peaks.

You can see we’re in a good place today. Some say the market has yet to trough because net new supply for 2012 could be lower still than it was in 2011. Looking at the pipeline for new hotels beyond 2012, there is not much new supply on the horizon. Over the next five years, the number of new hotels that could open represents less than 7% of total supply. To put that in perspective, consider that in boom years hotel supply can grow 4% in just one year.

So supply looks tight. Now, what about demand?

Demand for hotels generally follows the economy. If times are good, hotels fill up. If times are bad, they go half-empty. Easy enough. It is this rubber band action that makes hotels cyclical.

However, we again come at the scene after the storm has done its work. The two-year drop in demand from 2008-09 was the steepest and largest in the history of the lodging industry. The last two years have been strong on the demand side such that occupied rooms at the end of 2011 were the highest ever. So while it is true that room demand follows the economy, demand has always recovered and moved higher. The chart below shows you room demand since 1988.

Mix the growing demand with the bulge of bad loans coming due and tepid supply growth and you get a good recipe for rising hotel occupancy rates and room rate increases. This brings us to a final piece of evidence.

The long-term hotel occupancy rate is somewhere around 62%. It tends to peak at 64-65%. The last bottom, in January 2010, was about 55%. That’s your range. Where are we now? Somewhere right around 60%. When occupancy rates crest 60%, the hotel industry as a whole tends to be able to push rate increases through. So we’re at a key inflection point right now.

Anyway, room rates don’t tend to go backward for long. Over the last 20-plus years, we’ve had only three years when the average daily rate for the industry fell.

For all the above reasons, I told the subscribers of Capital & Crisis a few months ago that they should get back into the hotel business by investing in selected hotel stocks. I had not recommended a hotel stock to my subscribers since October 2004. Back then, I recommended Orient-Express Hotels below $17 a share. One year and a half later, I suggested selling it at $35.19 per share — a gain of more than 100%.

Once again, similar values are emerging in the hotel sector. Funny how if you are around long enough, you see market cycles and opportunities repeat. I think investors could do even better this time around.

As with the US housing bust, so with the hotel bust. There is extraordinary opportunity in the rubble.