The Bond Market's Search for the Bottom

Watch this space. Later this week we’ll give you an update on our Trade of the Decade. It’s looking better and better. Because the situation is worse than ever…

“What’s your view on the revolutions in North Africa,” asked a Dear Reader.

Generally, we avoid having views on things we know nothing about. Which is almost everything. As to what is going on, we have no idea better idea than the State Department or the CIA. Maybe the revolutions are driven tribal rivalries. More likely, increases in food prices – caused by Ben Bernanke – are to blame. And who knows? Maybe people really do crave liberty, democracy and Starbucks’ frappacinos.

But man is a restless beast. Often, he is content with the way things are. And then, a stone gets in his shoe…and he begins to limp and complain.

Each has his own private itch. One man has a fat wife and wants a skinny one. One has a slender wife and longs for one with more meat. One wishes he could bring his deceased wife back to life. Another has a lively wife and wishes she were dead.

Ask any of them and he will give the acceptable public line: it’s “freedom” he is after, or so he’ll tell the news media. But what kind of freedom? Most often it is the freedom to boss others around. He will want to vote, but only so he can tell other people how they should educate their children, which gods they should worship, and how much money they should send his way.

The only sure thing is that no government survives forever. Francis Fukayama thought he saw the “end of history,” when democracy got a toehold in Russia. Dictators need to be toppled, often in bloody revolutions. But democratic governments come and go, without making history.

But democracy has a sell-by date too. Its fatal flaw was identified hundreds of years ago. When the majority realizes it can vote itself money from the minority –or from the next generation – the system is doomed. Elected governments change, but the system just goes deeper and deeper into debt –until it can go no further.

We don’t know. But we’re all going to find out.

Stocks fell on Monday of last week…and continued falling until Friday. On Friday, the action reversed, with the Dow up 61 points and gold off $6.

It’s too early to say. By week’s end it didn’t look like the big break in the market that we’ve been expecting. But who knows? This is a new week. Anything can happen.

But, no matter what happens, it’s best to expect what SHOULD happen. And the way we see it, stocks and bonds should go down. The time for making money in stocks and bonds is over, in other words. This the time for getting out, hunkering down, and waiting until the crisis blows over.

…and oh yes…the people trying to deal with these problems are a bunch of…what’s the technical word? Oh yes, clowns.

What’s wrong with the market? Well… Bonds have been going up for nearly 30 years. Yields have fallen from near 20% for 10-year Treasury notes in the early ’80s to 3.42% on Friday. Very nice, if you’ve been holding bonds. And it might lead you to think you can hold them forever. Thirty years is a long time.

Unfortunately, nothing lasts forever…and certainly not a bull market in bonds. Instead, trends in the bond market tend to last about a generation. Yields generally fell from the ’20s until the Eisenhower administration. Then, they rose until Paul Volcker finally got control of inflation in the early ’80s. Next, they fell for the next three decades.

Are they still falling? No one knows. But it looks to us as though they’ve found a bottom. And even if they haven’t, you’re probably better off thinking they have. Because the bottom can’t be too far off…and there could be Hell to pay afterwards.

Meanwhile, over in the stock market, stocks are expensive – close to the record highs of ’29, ’66, and ’99. In fact, nominal prices are about where they were in the late ’90s, after doubling over the last 2 years. If the bulls are right, these high prices are just the beginning.

But what could drive them higher? The consumer economy runs on two important pistons of prosperity. Employment gives consumers more money to spend. And rising housing prices increases their net worth. Neither of those pistons is firing now. There are half a million fewer people with jobs now than there were 2 years ago. And house prices are still going down.

How is it is possible for a genuine prosperity to develop under these conditions?

But wait…it gets worse. The fed are still adding debt to the system – even while the private sector desperately needs to off-load it. Not only that, they are making the entire system dependent on negative interest-rate financing. The Fed lends below the level of consumer price inflation. Businesses, consumers, banks and speculators soon NEED cheap money just to keep going. Most of all, government needs it. You can easily see how this works. Zero interest rate financing allows the US government to run a deficit of $1.5 trillion this year. But the feds only have revenue of $2.2 trillion. So, they’re spending roughly 60 cents more for every dollar they take in. And soon the official interest-bearing debt will be at $15 trillion – nearly 7 times revenues…

Do you see the problem? Low interest rates permit the feds to borrow. They run up huge debts…and then they have so much debt that they can’t afford to raise rates. They are stuck. They have to keep borrowing until it’s too late to stop…until we’re all busted.

The Top Digital Alternatives to the Dollar

Chris Campbell shows you why the rise of alternative currencies isn’t a fad. You’ll see exactly what they are, why they’re challenging government fiat currencies and how you can utilize them to protect your assets. The report offers direct solutions on why only the best money can win in a given market. Sign up for the Daily Reckoning today and receive your FREE report. 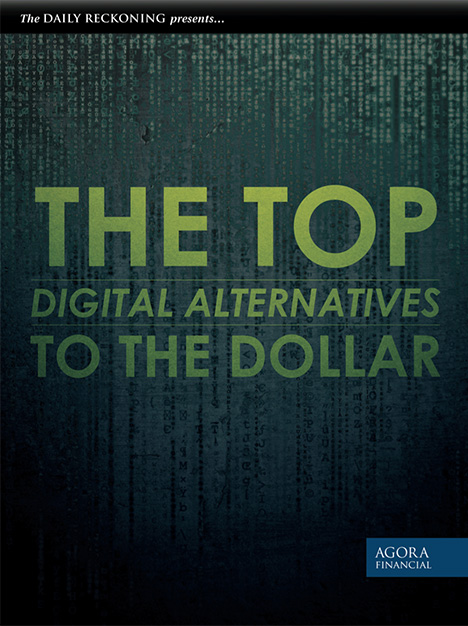 A close confidant of President Reagan released an exclusive excerpt from his popular book Trumped! A Nation on the Brink of Ruin and How to Bring it Back. America is at the brink of financial ruin. And these are ten steps the next president needs to take to avoid disaster in the next four years. Sign up for the Daily Reckoning today and receive your FREE report. 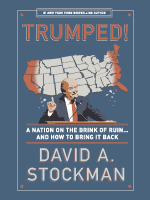