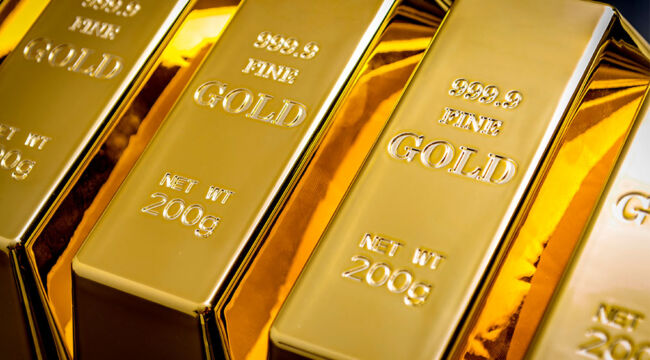 Gold is in the early stages of its third great bull run that will take it to record heights.

Still, most mainstream economists dismiss gold. They call it a barbarous relic and say it has no place in today’s monetary system.

But today, I want to remind you of the three main arguments mainstream economists make against gold and why they’re dead wrong.

There’s Just Not Enough Gold to Support the Money Supply!

That argument is complete nonsense. It’s true that there’s a limited quantity of gold. But more importantly, there’s always enough gold to support the financial system. The key is to set its price correctly.

But to avoid that, all we have to do is increase the gold price. In other words, take the amount of existing gold, place it at, say, $14,000 an ounce, and there’s plenty of gold to support the money supply.

In other words, a certain amount of gold can always support any amount of money supply if its price is set properly. There can be a debate about the proper gold price, but there’s no real doubt that we have enough gold to support the monetary system. I’ve done that calculation, and it’s fairly simple. It’s not complicated mathematics.

You do have to make some assumptions, however. For example, do you want the money supply backed 100% by gold, or is 40% sufficient? Or maybe 20%? Those are legitimate policy issues that can be debated. I’ve done the calculations for all of them. I assumed 40% gold backing.

Some economists say it should be higher, but I think 40% is reasonable.

Using existing money supply, a 40% gold backing, and available gold supplies, the implied non-deflationary price of gold is $14,000 per ounce (and getting higher as money supply expands).

Governments are desperate to overcome disinflation and deflation. Excessive debt loads are a headwind to growth and cause precautionary savings, both of which are deflationary. The only reliable way to break the back of deflation (and, no, money printing does not work) is to devalue the dollar against gold.

This was done in 1933 and 1971, and it worked to create inflation both times. An 85% devaluation of the dollar (about the devaluation achieved in the 1970s) will inflate away the debt burden, stimulate nominal growth and result in a gold price of $15,000 per ounce.

But again, it’s important to realize that there’s always enough gold to meet the needs of the financial system. You just need to get the price right.

But in a scenario where there’s a total loss in confidence, they’ll likely have to go back to some form of a gold standard.

If you’re going to have a gold standard or even use gold as a reference point for money, if you need to restore confidence in the dollar, the implied non-deflationary price is $15,000 an ounce.

The second argument raised against gold is that it cannot support the growth of world trade and commerce because it doesn’t grow fast enough. The world’s mining output is about 1.6% of total gold stocks (global gold production has actually flatlined at around 3,300 metric tonnes for the past five years). World growth (leaving 2020 out because of COVID) is roughly 3–4% a year. It varies, but let’s assume 3–4%.

Critics say if world growth is about 3–4% a year and gold only grows at 1.6%, then gold doesn’t grow fast enough to support world trade. A gold standard therefore gives the system a deflationary bias. But that’s also nonsense, because mining output has nothing to do with the ability of central banks to expand the gold supply.

The reason is that official gold, the gold owned by central banks and finance ministries, is somewhere about 35,000 tons. Total gold, including privately held gold, is about 180,000 tons. That’s 145,000 tons of private gold outside the official gold supply.

To argue that gold supplies don’t grow enough to support trade is an argument that sounds true on a superficial level. But when you analyze it further, you realize that’s nonsense. That’s because the gold supply added by mining is irrelevant since central banks can just buy private gold.

The third argument you hear is that gold has no yield. That’s Warren Buffett’s main criticism of gold (even though he’s now invested in a gold stock). It’s true, but gold isn’t supposed to have a yield. Gold is money. And money doesn’t offer a yield.

I was on Fox Business with Maria Bartiromo once. We had a discussion in the live interview when the issue came up. I said, “Maria, pull out a dollar bill, hold it up in front of you and look at it. Does it have a yield? No, of course it has no yield, money has no yield.”

If you want yield, you have to take risk. You can put your money in the bank and get a little bit of yield — maybe half a percent. Probably not even that. But it’s not money anymore. When you put it in the bank, it’s not money. It’s a bank deposit. That’s an unsecured liability in an occasionally insolvent commercial bank.

You can also buy stocks, bonds, real estate and many other things with your money. But when you do, it’s not money anymore. It’s some other asset, and they involve varying degrees of risk.

The point simply is that if you want yield, you have to take risk. Physical gold doesn’t offer an official yield, but it doesn’t carry risk. It’s simply a way of preserving wealth. Gold is money.

So, the three mainstream criticisms of gold don’t hold water once you actually analyze them properly.

Now, the third great bull market in gold is underway, as I predict gold will reach $15,000 by 2026. Of course, nothing goes up in a straight line, and there will be pullbacks along the way. But the trend is up.

I believe the primary way every investor should play the rise in gold is to own the physical metal directly. In fact, I always say that at least 10% of your investment portfolio should be devoted to physical gold — bars and coins primarily.