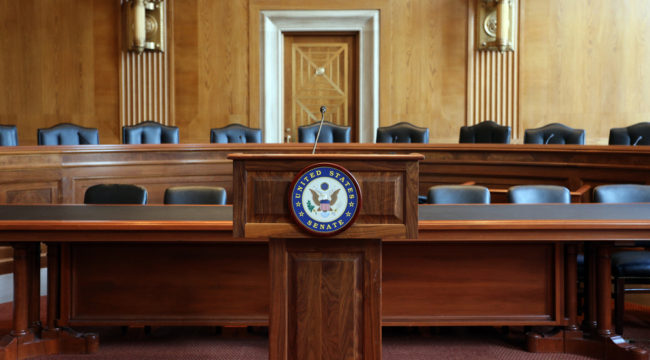 The Blessings of Democracy

The Senate is expected to introduce its own version on Friday.

The GOP plans to pass the tax bill in the Senate with a simple majority vote through “reconciliation.”

Since Republicans enjoy a Senate majority, the bill requires no Democrat support.

But four Republican senators — John McCain, Jeff Flake (both of Arizona), Susan Collins and Robert Corker — have already declared against any bill resembling the House version.

McCain, Flake and Corker say they won’t agree to a bill that adds one red cent to the deficit.

Collins is hung up on the estate tax.

Now Ted Cruz has thrown in with the mutineers… and for strange cause.

He says the bill will elevate the taxes of higher-income residents of states like New York and California… deep blue states that wouldn’t vote for a Republican president even if hell turned to ice.

“I think tax reform needs to cut taxes for everybody,” says the Texas senator, either in principle or strategy.

We thus arrive at a mathematical impasse:

Without any Democratic support, Senate Republicans can only afford two mutineers for the tax bill to pass.

President Trump must therefore seize at least three Republicans by the collar… or pry free some Senate Democrats to take their place.

Babies will sprout beards before either happens.

Now, fresh rumors circulate that corporate tax cuts could be delayed another year.

“My guess is we are going to have a tough time getting it done,” says Ian Winer of Wedbush Securities.

“It’s something that would impact the domestic stocks in the U.S. and would be a setback for the market in general,” adds Francois Savary of Prime Partners.

The major indexes opened lower this morning, at least in part due to the fireworks.

Stocks rediscovered their bounce later in the day — as they always do nowadays.

All three indexes ended the day in green clover.

Meantime, gold was up over $5 today.

We must admit, beyond its market impact, this spectacle of democracy in action amuses us grandly…

The great warfare of factions, the thundering collision of interests… each fellow trying to get it over on the next, looking to dip his own bucket in the stream, his own snout in the trough.

A fourth enters a claim of his own.

Pity the poor politician who has to referee and score the bout.

He can’t please them all. Yet he tries.

Here we say nothing of his strivings to please the voter.

Stow your objection that the nation is $20 trillion in debt largely because the election-minded politician can’t say no to anybody.

We will not listen!

Under what other type of government would you be so royally entertained?

A dictatorship, for example, offers no comparable entertainment — all oars pull in one direction — and the fantastic combats of democracy are unknown.

If we’re out of joint for whatever reason, we find solace in the fact that we’re planted under the democratic folds of the stars and stripes.

Yes, we concede that “democracies have ever been spectacles of turbulence and contention,” as Madison notes in Federalist No. 10…

We further grant his point that democracies “have ever been found incompatible with personal security or the rights of property; and have in general been as short in their lives as they have been violent in their deaths.”

All true and more… and who are we to argue with the Father of the Constitution?

We’ll even admit the possibility that American democracy is closer to the end of the chapter than the beginning.

But ah, what a show while it lasts…