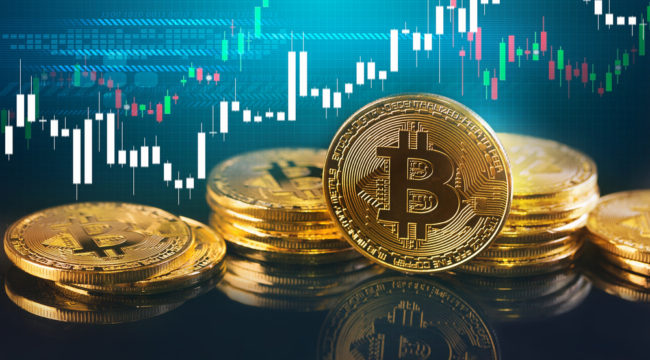 I argued repeatedly that it was nothing but a massive bubble and that the bubble would probably burst when it hit $20,000.

The crash of bitcoin was even more dramatic than the infamous collapse of tulip prices in the tulipomania in Netherlands in the early 17th century.

But suddenly, bitcoin is back in the news.

Happy days are here again! Bitcoin mania is back!

60 Minutes even ran a feature on bitcoin last night.

Is this the start of a new rally back to the heights of $20,000? That seems highly unlikely.

Early Friday bitcoin plunged well over $1,000 in a massive flash crash, about 10% in one day. Easy come, easy go.

What caused the crash?

It seems that a bitcoin “whale” unloaded a massive holding.

A “whale” is a term for a cryptocurrency investor with a large amount of units, or “coins.” That gives them significant influence on the market control.

It’s been estimated that less than 450 people or entities own 20% of the entire bitcoin market.

And when someone buys or sells a massive amount, prices can swing dramatically, as we saw on Friday.

It is still not clear if the large sell order was deliberate or an accidental “fat finger” error.

Prices have recovered to some extent, and bitcoin’s trading around $7,800 today. But either way, Friday’s flash crash highlights a major weakness of bitcoin. It can all come crashing down like a house of cards, as bitcoin’s 2017–18 hair-raising plunge proves.

As an asset, bitcoin has very little to offer outside of speculation.

Bitcoin still has no use case except for gambling by speculators or the conduct of transactions by terrorists, tax evaders, scam artists and other denizens of the dark web. Bitcoin is still unsustainable due to extreme demands for electricity in the computer “mining” process.

It is still nonscalable due to the slow and clunky validation process for new blocks of transactions on the bitcoin blockchain. Bitcoin has no future as “money” because the supply of bitcoin cannot grow beyond a preset amount.

That feature makes bitcoin inherently deflationary and therefore not suitable for credit creation, which is the real source of any system of money. Bitcoin has been subject to continual price manipulation by miners through wash sales, front-running, ramping and other tried-and-true techniques for price manipulation.

The bitcoin infrastructure has been plagued with hacking, fraud, bankruptcy and coin theft measured in the billions of dollars. Bitcoin may go higher from here; it’s entirely possible. But it will then come crashing down again.

What is bitcoin’s intrinsic worth?

JPMorgan Chase has tried to break it down. They examined bitcoin as a commodity.

To arrive at its worth, JPMorgan Chase estimated the cost of producing each individual bitcoin by looking at factors such as electrical costs, computational power and energy efficiency. I mentioned these factors above.

When they crunched the numbers, what number did they come up with?

JPMorgan Chase estimated the intrinsic value of bitcoin at around $2,400. Let’s assume for now that’s accurate, or a reasonable approximation. Then even at $8,000, we can conclude that bitcoin is severely overvalued.

JPMorgan Chase compared bitcoin’s recent run-up to the bubble it experienced two years ago. Even though it is still far from $20,000, if we see another speculative frenzy it could undergo a similar run. But it would end the same way.

The bottom line is I would advise you to stay far away from bitcoin. Do not get sucked in by the hype.

Sadly, some people never learn. And my guess is that many will get burned all over again.

Read on for more.