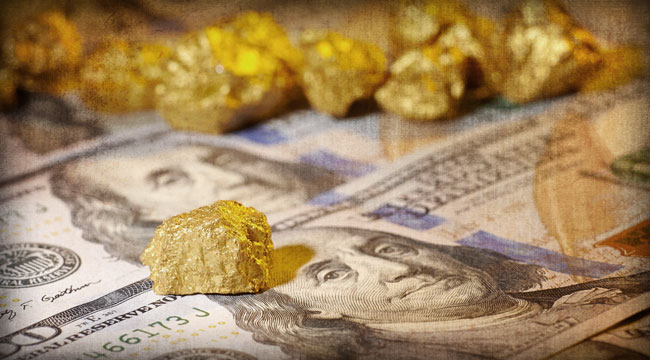 The Best Way to Preserve Your Dollar's Purchasing Power

The best thing about Steve Forbes’ new book, Money, is that it discusses exactly the specific reforms that should be adopted today to establish a modern, 21st century link to gold for the dollar. That new system would not require the federal government to hold any gold stockpiles, and the money supply would not be limited to the availability of any quantity of gold.

Federal law would fix the dollar’s value in gold at a specified market price. That price would be set by some index to recent market prices for gold, perhaps the average gold price for the last five to 10 years, marked up by 10% as a hedge against causing deflation in the process. Federal law would mandate that the Fed conduct its monetary policy to ensure a stable value of the dollar at that market price.

Along with a federal balanced budget amendment to the Constitution, this would effectively make Keynesian economics illegal.

The Fed would enforce that price through its open market operations buying and selling U.S. government bonds. If the price of gold began wandering in the market above the specified market price, that would signal the threat of inflation, and the Fed would begin tightening monetary policy by selling bonds to the market in return for cash withdrawn from the market.

That reduced money supply would hold down price increases in the market, including for gold. The Fed would continue this policy, until the market price for gold returned to its specified target value.

If the price of gold began wandering in the market below the specified market price, that would signal the threat of deflation. The Fed would then begin loosening monetary policy by printing cash to buy U.S. government bonds in the market. That would increase the money supply, which would tend to increase prices in the marketplace, including for gold.

The Fed would continue this policy until the market price for gold returned to its specified target value. The Fed would be required by the federal law to take such actions to prevent the price of gold from varying from the target price by more than 1%, which was the range permitted under the Bretton Woods system for currencies to fluctuate against the then gold backed dollar.

The federal law would provide that this new monetary policy would become effective at a specific date set in the future, perhaps 12 months away, to enable the private economy to plan for and adjust to the new policy. The law should grant the President or some other federal official the power to adjust the target price for gold to reflect more recent market prices as the implementation date approaches.

Those more recent market prices would better reflect what the target gold price should be when the dollar is based on this new link to gold.

A lesson learned from experience with President Obama, the law should also specify that any member of Congress would have standing to sue the President or other designated official if he or she did not carry out the law regarding this later market based adjustment as provided, and that federal courts would have the power to enforce relief. For example, not following more recent market prices in adjusting the target price would be a violation of the law.

This would effectively mean that the Fed would no longer have any power to pursue discretionary monetary policies to try to guide the economy in one direction or another. The new federal law would bar the Fed from attempting to manipulate interest rates, for example.

So the Fed could continue to set the “discount rate” that it would charge for such short term, lender of last resort borrowing. But even that would be required to be set above market rates, so that the Fed would not become a cheap source of funds for banks to borrow to lend out.

As a safeguard to help ensure that the Fed did follow its responsibilities under this new law, the law should specify that anyone could turn dollars into the Fed, and get gold at the legally specified target price. If the Fed was following the law, it could always buy gold in the market to pay for such a redemption in return for the target price for gold.

If the Fed was not following the law, then it would likely not be able to finance such mandatory redemptions. The new federal gold law should again specify that any member of Congress would have automatic standing to sue the Fed to enforce the law.

Another safeguard would involve removing all barriers to the rise of private, competing, alternative currencies, to challenge the Fed to enforce and follow the law. That would mean no taxes, including capital gains taxes, could be assessed on sales of gold and silver. If the Fed did not follow the law, then these competing currencies could displace the dollar.

Such a new gold link to the dollar would be the last, missing component to any comprehensive strategy to restore traditional, world leading, American prosperity. Such a strategy would include as well personal and corporate tax reform to lower tax rates, deregulation of unnecessary regulatory costs and barriers, reduced federal spending to balance the budget and reduce the national debt as a percent of GDP, and free trade.

Those policies could be expected to restore long-term U.S. economic growth to 4% of GDP, which would leapfrog the American economy another generation ahead of the rest of the world.

Peter Ferrara
for The Daily Reckoning

Ed. Note: Whether or not a gold standard of money ever returns to the United States, it’s important to realize the value of gold as a store of wealth. That’s why, in today’s issue of Laissez Faire Today, readers were given exclusive access to a secure way to buy, store, and sell gold. To make sure you never miss out on another great opportunity like this, sign up for the FREE Laissez Faire Today e-letter, right here.

How Inflation Could Be Caused in 15 Minutes

Here’s acclaimed economist Jim Rickards on how the Fed could use the Fort Knox gold to instantly create massive inflation. This matters more than you might realize to your money, investments and savings…

Peter Ferrara is Director of Entitlement and Budget Policy for the Heartland Institute, Senior Advisor for Entitlement Reform and Budget Policy at the National Tax Limitation Foundation, General Counsel for the American Civil Rights Union, and Senior Fellow at the National Center for Policy Analysis. He served in the White House Office of Policy Development under President Reagan, and as Associate Deputy Attorney General of the United States under President George H.W. Bush.