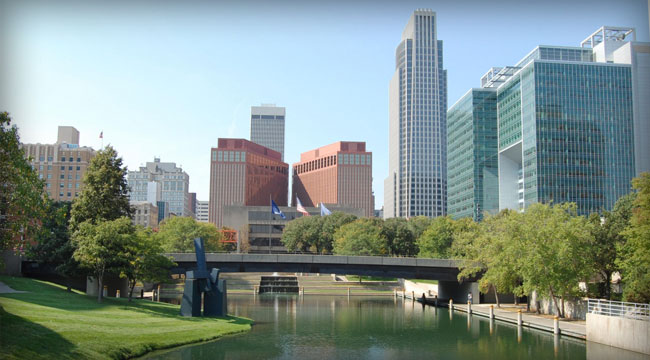 The Best Ideas from Omaha Weren't At the Meeting

“If people weren’t so often wrong” Charlie Munger quipped, “we wouldn’t be so rich.”

Along with more than 40,000 other people, I was at the Berkshire annual meeting in Omaha, Nebraska, on Saturday. Here Warren Buffett (84) and Charlie Munger (91), hold court. The two super-investors answer questions from the audience and opine on just about everything. (Munger had all the best lines. What a wit.)

But the best ideas I got were not at the meeting.

I arrived Thursday along with Thompson Clark (editor of Agora Financial’sMicrocap Millionaires). We rented a house across the river from Omaha, in Council Bluffs, Iowa. We called our place the “AF House” after Agora Financial.

Ever the value hound, Thompson found it through Airbnb. It was a bit drafty and creaky and worn down. It had a badly cracked TV that still worked somehow. And there was no Wi-Fi, but a note pointed out we could tap into the neighbor’s network. It was clean, though, and perfectly suited for us — we were hardly there except to sleep, which we didn’t do much of anyway.

We arrived Thursday because there are many side events on Friday that make the trip a must.

I’ll be frank: The Berkshire meeting itself is insufferable for long stretches. People ask too many questions along the lines of “What five things do you look for in a company?” and “What mental model can a young person use to build a business that lasts?

As Thompson put it, “We’re past Peak Wisdom.” And I agree. Buffett is 84, and Munger is 91. They’ve been doing this a long time. There are many letters, interviews and books about what they think. I think we know by now what they are all about.

And then there are the people who want to use the platform to advance some social agenda. So you always have to sit through questions about taxes or income inequality and all kinds of things that have nothing to do with what these men do and what they are good at.

But good questions do leak in. These you don’t need to be here for, because they get picked up in the press. So you can read about them at your leisure on Sunday morning and get all the good stuff anyway.

For that reason, I’m not going to give you a rundown of what happened. But I will tell you why I think coming here is a must.

First, so many great investors come here. I saw Mario Gabelli, Bill Ackman, Thomas Russo and many others. I got to catch up with friends such as Dan Miller at Gabelli (who runs the outstanding Focus Five Fund) and David Marcus at Evermore Global (who runs the Evermore Global Value Fund — recommended particularly if you want exposure to Europe).

I met up with many other money managers, analysts and investors I know — too many to name — at lunches, dinners, cocktail hours and more. I even met with readers, some who had come from outside the U.S. (Hello, Luis from Venezuela!) Then there are those many side events that go on where people pitch ideas and discuss stocks.

All of this is why Omaha is a must. And it’s at these meetings where I got the best ideas. I have several pages in a notebook full of scribbles — tickers, thoughts, etc. And I will cull these over the coming weeks.

To give you a taste: One invite-only event I attended was Gabelli’s Ninth Annual Omaha Research Trip. Seven companies made presentations to a group of about 20-30 investors.

One of them was Safeguard Scientifics, ticker SFE.

If you’ve been around awhile, you may remember SFE was an incubator of startup high-tech companies. When the 2000 tech bubble popped, SFE found itself with about 100 companies in its portfolio. After that washout, maybe 10 had value.

SFE is now 15 years from that meltdown. It’s really a new company. CEO Stephen Zarrilli was the former CFO. He’s been at the helm for about 2½ years. I like what I heard him say.

SFE is today, in essence, a publicly traded venture capital firm. It takes stakes in private companies (20-50%), helps them grow and then looks for an exit — such as an IPO. At the moment, SFE has investments in 26 companies. The focus is on health care and technology. Historically, over the last eight years, SFE has realized a return of two times on its investments. It carries these investments at cost (or less than cost). Keep this in mind.

There is a lot to the story here, but I’ll cut to the meat of why I think it’s interesting.

One investment is a company called Putney. It makes generic drugs for pets. More than 90% of pet drugs have no generic equivalent. So this is a big market. Putney is growing sales at a 50% clip. It approved five products in the last five months. It has a pipeline of 15 compounds it is in the process of bringing to market. Putney is the most prolific company at what it does.

What’s it worth? Well, let’s start with 4 times sales, which is what comparables trade for. Let’s assume Putney does 50% growth to 2016. Taking into account SFE’s stake, the value to SFE is almost $7 per share. This gives no value to the pipeline, Zarrilli reminded us.

So that’s one company. There is another called MediaMath, an advertising technology company. A similar company, Criteo, went public in 2013. Comps trade for 4-5 times sales. Again, using estimated 2016 sales, the value of MediaMath is at least $10 per share net to SFE.

That’s two companies alone that can get to $17 per share in value.

There are 24 other investments to go. And Zarrilli said that on every one of these, SFE would get at least its money back. Plus, there is all that net cash and $200 million in net operating losses (or NOLs) that will largely shield SFE’s gains on Putney and MediaMath.

More conservatively, you could just look at the $260 million SFE’s invested and multiply by two times (the historical return). Add $90 million in cash (net of debt). And you get a rough net asset value per share of $29.50 per share.

Moreover, Zarrilli said SFE’s goal was to return more cash to shareholders either via a stock buyback or dividend. (It already repurchased $25 million of stock last year.) And he also talked about the incentives at the firm. All the managing directors have compensation directly tied to creating a cash return over cost.

So there you go. This is one idea among many, that I’ll be giving a deeper look in the coming months in my newsletter Mayer’s Special Situations. That’s all for now.