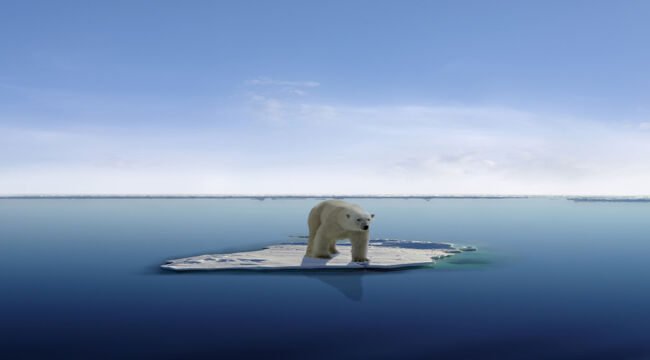 EARTH is down with a fever. Even the polar ice has vanished. Reports The Washington Post:

The Arctic seems to be warming up. Reports all point to a radical change in climatic conditions, and hitherto unheard-of high temperatures in that part of the earth’s surface. Expeditions have sailed as far as 81 degrees 29 minutes north in ice-free water. The eastern Arctic has steadily gotten warmer, and today the Arctic of that region is not recognizable as the same region of about 50 years ago. Many old landmarks have changed as to be unrecognizable. Where formerly great masses of ice were found, there are now often moraines, accumulations of earth and stones. At many points where glaciers formerly extended far into the sea they have entirely disappeared.

Formerly the waters around Spitzbergen (Norway) held an even summer temperature of about 3 degrees Celsius; this year recorded temperatures up to 15 degrees, and last winter the ocean did not freeze over even on the north coast of Spitzbergen.

As well imagine hell without its fires. But there you are.

To deny climate change is to deny the very nose upon your face — or gravity itself.

But what is this? Could it be?

The article here cited bears the date of November 2… 1922.

The Arctic was iceless in 1922… if you accept the verdict of The WashingtonPost.

But the internal combustion engine was a mere adolescent in 1922, a junior menace, a future bugaboo.

Industry was up and going — but enough to melt the stubborn Arctic ice? We are filled with doubt.

We must therefore credit an alternate heat source. But what?

We do not know. We lack credentials within the climatic sciences.

Yet there is the sun to consider — it gives off a varying glow. Might shifting ocean currents explain it… or wind patterns?

We hazard they might. Again, we do not know. But we slant heavily towards the natural explanation.

So much for 1922. What about 2020? Has an additional century of fuel-burning raised the earthly temperature?

It cannot be denied, carbon dioxide emissions are greater than in 1922.

We ordered our minions to investigate the literature. This morning they dropped the report upon our desk. Thus we learn:

Of those 100 cases, 99 are not greenhouse gases. They are therefore irrelevant to our inquiry.

Of the one bottle that represents this demon molecule, perhaps 50 milliliters represents mankind’s annual contribution — roughly one shot glass.

And so… of our theoretical atmosphere of 2,400 liters, humans account for perhaps one shot glass of carbon dioxide.

Alternately: consider the atmosphere a 100-story building. The human CO2 concentration amounts to the linoleum on the ground floor.

Yet this relative trifle is scorching the planet? We request the authenticated documentation — chapter, verse, line — footnotes included.

It is fully plausible that fuel-burning has tinkered Earth’s temperature. And carbon dioxide is but one variable in the mix. The science is… complex. It is beyond our slender comprehension.

But if Earth’s climate was so exquisitely sensitive to minor carbon dioxide rises… why hasn’t it burned up?

This planet has previously endured CO2 levels 25 times or greater than today’s, we are informed. Yet the match never struck.

Why are we tackling climate change today? This publication centers on money and markets, after all.

The answer is because the Federal Reserve is enlisting under the banner of climate change… and entering the fray.

A Risk to Financial Stability

For the first time in its 107 years… it has labeled climate change a risk to financial stability — a risk greater, ostensibly, than even itself.

Chronic hazards, such as slow increases in mean temperatures or sea levels, or a gradual change in investor sentiment about those risks, introduce the possibility of abrupt tipping points or significant swings in sentiment… Acute hazards, such as storms, floods, or wildfires, may cause investors to update their perceptions of the value of real or financial assets suddenly.

That is, the Federal Reserve must keep an eye upon the weather.

It is not alone. To the European Central Bank (ECB), climate change is a mighty fee-fi-fo-fum that menaces financial stability.

The central bankers can moan about climate change all they please. But is it within their power to address?

After all, you say, they cannot even squeeze 2% inflation out of their economies.

How then can they command Nature herself… and dictate her temperature across all four corners of Earth?

Yet they are answering the klaxon… and clearing for action. How might central banks rout the evil enemy, how might they break the fiery siege?

By putting “carbon-intensive” industries on ice. Reports the New Economics Foundation, regarding the Europeans specifically:

That is, they must place their thumbs upon the scales.

That is, they must allocate resources through political consideration.

“We have to ask ourselves,” says Ms. Lagarde … “whether market neutrality should be the actual principle that drives our monetary-policy portfolio management.”

The question itself is the answer.

The Green Behind Green Energy

The scheme is green in this one sense: It would green the “clean energy” industry. Jim Rickards:

Central bank support for the climate change agenda is more than just rhetoric. Central banks regulate commercial banks and control payments systems. They may decide that loans to energy companies should be discouraged and finance for wind and solar systems should receive favorable treatment. They can also require disclosures by banks intended to cast carbon-intensive sectors in a bad light.

A term exists for it — crony capitalism. The scoundrels and frauds will be holding out their hats… promising to lower Earth’s temperature and its sea levels… in exchange for easy financing.

But is cleaner wind and solar energy not desirable? Should the world burn coal instead… and choke?

We take no position. If the world prefers wind over oil, solar over coal, let it have wind and solar over oil and coal.

Yet the world must evidently come to terms with fundamental physics…

All sources of energy have limits that can’t be exceeded. The maximum rate at which the sun’s photons can be converted to electrons is about 33%. Our best solar technology is at 26% efficiency. For wind, the maximum capture is 60%. Our best machines are at 45%. So we’re pretty close to wind and solar limits. Despite big claims about big gains coming, there just aren’t any possible.

If this fellow is correct — our minions inform us he is — we begin to suspect we are being taken for a sleigh ride.

Yet they may become highly efficient absorbers of capital.

We hazard many green energy businesses will prosper… with central banks helping to push them along… though few will produce much by way of value.

That is, they will grab valuable capital from worthier and more productive hands. They will likely form a lovely bubble in time.

But at least they are saving the planet…