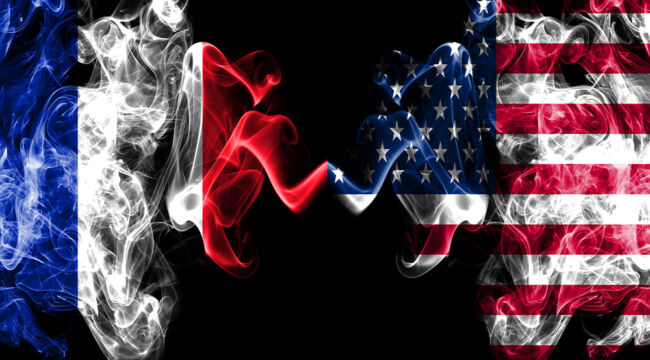 They are discussing diplomacy.

At one point a pause broke their conversation. Mr. Kissinger then solicited his host’s estimate of the French Revolution’s impact upon the world.

“Too early to say,” came the response.

Premier Zhou was likely referring to the 1968 student agitations in Paris. But let us proceed under the cover of myth… and report on the progress of the 1789 revolution.

Is it too early yet to pronounce verdict upon the French Revolution? That is the question we take up today — and tomorrow.

That is when the Paris rabble besieged the Bastille fortress-prison… in quest of arms to raise against King Louis XVI.

The French Revolution tailed the American Revolution — so called. Each revolution undid a king.

The French revolutionaries pulled old Louis from his throne at Versailles. They later introduced him to Monsieur Guillotin’s toy.

An ocean spared George III the blade or the noose, yes. But the American colonists struck the trans-Atlantic chains that had previously bound them.

Each revolution represented a blow against kingship, it is true. Yet each drew from different aspirations.

Before proceeding, a note:

We paint today in bright colors, with a brush that is necessarily wide. That is, we omit much of the subtlety, much of the shade and shadow of the full historical portrait.

Yet in the overall view… the French revolutionists were out to end the Ancient Regime that sat upon them. That was the old throne and altar social and political system of the Bourbon kings.

The American revolutionists — meantime — were out to reclaim the ancient rights of Englishmen. It was these rights that George III was chewing into and molesting… as they saw it.

The American revolutionists were not out for revolution — but a sort of reset, as a man resets an erring grandfather clock, or a wayward thermostat.

They did not seek change, that is — but to stay largely the same.

Did they qualify then as revolutionaries?

Enlightenment statesman Edmund Burke labeled England’s Glorious Revolution of 1688-89  “a revolution not made but prevented.”

The same may be said — the same has been said — of the American Revolution.

You Need Form in Order to Reform

The American revolutionists pursued reform, it is true. Yet reform has no existence without preexisting form.

The form is first, there in its three dimensions. It has bulk. It is solid.

Reform chisels it, sands it, paints it, renews it.

Importantly, reform does not wreck it. It is true to the underlying form.

The Americans had their preexisting form: their British cultural and political heritage.

They clung to the Magna Carta and the ancient rights of Englishmen. They modified, updated and molded the existing form into a new American shape.

That is… they reformed.

Yet the French revolutionists did not reform. They proceeded with axes, hacksaws, sledgehammers, wrecking balls…

They razed all prior social, cultural, religious and political forms. All structures came down, all bridges to the past.

Nothing remained to reform.

The revolutionists threw aside their “political servitude,” argued Burke — but at the price of their souls.

That is because they likewise threw aside the “yoke of laws and morals” that had bound them to Christian virtue. They deformed society… rather than reforming society.

From one summary of Burke’s 1790 Reflections on the Revolution in France:

The French Revolution… was tending towards anarchy rather than reformation. Burke valued tradition and the structures that had built up over time rather than the shattering of state, culture and religion that had taken place in France.

These French revolutionists had no past, as stated. They had only a future. Do we misstate or stretch the facts? We do not. It is literal truth.

In 1792, French revolutionists emptied the existing calendar into the wastebasket… and tacked up a new calendar… beginning at “Year One.”

All twelve months of the calendar were rechristened, primarily after the rhythms of nature.

The months themselves were broken into three weeks, each consisting of ten days.

Each day — in turn — was reduced to ten hours under a decimal system. One new hour counted 144 miniatures or 2.4 times the old hour.

Churches, meatime, were reconfigured as “temples of reason.”

All traces of religion and the Church were cleared out, all holy days stricken out. Libertarian writer, Mr. Lew Rockwell:

Streets named after saints were given new names, and statues of saints were actually guillotined… The calendar itself, rich with religious feasts, was replaced by a more “rational” calendar with 30 days per month, divided into three ten-day weeks, thereby doing away with Sunday. The remaining five days of the year were devoted to secular observances: celebrations of labor, opinion, genius, virtue, and rewards… People were sentenced to death for owning a Rosary, giving shelter to a priest, or indeed refusing to abjure the priesthood.

Now you have the flavor of it. Imagine it — a lunatic nation dynamiting its past foundations — and beginning anew at Year One.

How does a man know his age… or celebrate his birthday?

The Democracy of the Dead

The revolutionists, argued Burke, lowered their axes upon what Lincoln later labeled the “chords of memory.”

These are the chords of memory that link past to present, past and present to future. In this democracy of the dead, the dead are granted a vote.

Yay, nay or present… they have a say in a nation’s doings.

The French revolutionaries stripped the dead of their vote. They replaced it with the tyranny of the living. And the unborn would never learn the wisdom of the ancient ones. In Burke’s telling:

The French revolutionists may have struck the old shackles from their wrists. But they merely exchanged them for new shackles.