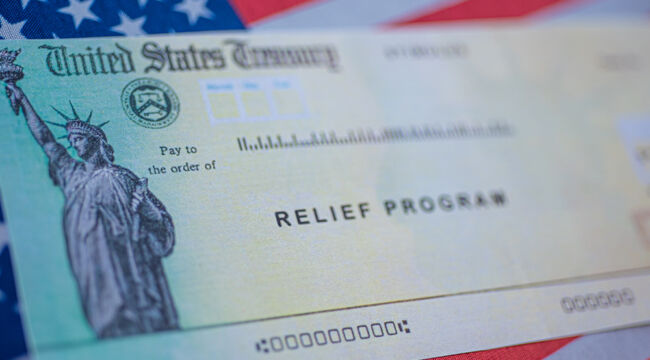 The air is crisper, the grass grows greener, the birds chirp louder. There is more joy in heaven…

For rescue is at hand.

Tomorrow it ships to the House of Representatives… where passage is certain… then on to America’s rescue.

But should you think the rescuing is limited to pandemic relief… please have another guess.

“The government” would spend roughly $435 billion to slip a $1,400 cheque in every American wallet.

Why previous administrations did not sharply cut poverty by showering money on Americans… we do not pretend to know.

But President Biden insists we must “act big.” Act big we will.

What extravaganzas account for the remaining $1.45 trillion of America’s rescue plan? Jim Rickards:

COVID relief sounds like something that’s badly needed and most Americans support it. But, that’s not what this bill is. Only about $200 billion of the $1.9 trillion goes directly for COVID-type assistance in terms of public health, vaccine distribution, testing and aid to hospitals and other public health facilities. The rest goes for a wish list of Democratic welfare spending.

Towards Guaranteed Basic Income and an Expanded Entitlement State

Have you no compassion, Jim?

One can debate the equities of each of these policies. But, they have nothing to do with COVID or public health. This is a huge leap in the direction of guaranteed basic income and an expanded entitlement state.

A fellow grows accustomed to his government cheques. He bellyaches mightily if he stops receiving them.

And he registers his distress in the voting booth. Vox correspondent Dylan Matthews:

Cash’s bipartisan popularity, and its ability to muster large-scale public interest and support, suggests that the future might involve a lot more policies like checks — even when the pandemic has passed. Covid-19, in other words, may have done what years of basic income advocacy could not do on its own…

What politician is unwilling to reach into a man’s left pocket… seize his cash… and sink it into the right pocket?

The poor fellow fails to notice the transfer.

40% of the Entire Budget From Two Years Ago

The federal government ladled out $4.4 trillion in 2019. The American Rescue package costs a walloping 40% of that total.

And the year is youthful. Trillions in additional spending will come hemorrhaging by year’s end. Jim:

With the ink not yet dry on the new spending, congressional leaders are already planning a new multi-trillion dollar deficit spending package to be passed later this year, probably by August… The details are still being debated, but some suggestions include a $4 trillion spending package paid for with $2 trillion of tax increases and $2 trillion of new deficits financed with borrowings.

Is additional narcotic the cure for a narcotics addiction? Does a man trim his waistline by doubling, tripling — quadrupling — his calories?

Does the same man attain wealth by purchasing $5 of goods for each $1 he hauls in?

Nor are we convinced that the government — millions of men chained together — is different.

Yet our position is the uneducated position, say the spenders.

The household must balance its books. The federal government does not.

The fellow who catches it throws it at this gewgaw or that gimcrack. The gewgaw peddler or gimcrack peddler proceeds to throw it at the restaurateur… who throws it at the automobile salesman.

It enriches every hand it touches. It performs heroic duties.

Thus the public debt is a private blessing.

That is what the wiseacres tell us. This is what they often neglect to tell us:

The borrowed dollar must be repaid — with a bit of interest into the bargain.

As we have argued and argued again: Government claims no resources of its own. It corrals money in one of two ways.

Here is the first:

It presses a pistol against the citizen’s ribs… and plunders his wallet.

Here is the second:

It takes to the credit markets, sinks to its knees, and extends an empty cup.

But even if the government borrows, the pistol goes against the ribs.

Recall, the citizen must pay taxes to service the borrowing. And how — again — does the government take in taxes?

In both instances, the pistol comes out… and the citizen puts his hands up.

In days such as these, we might recall the timeless principles of economics…

Here is Henry Hazlitt from his masterly primer on economics, Economics in One Lesson:

Everywhere government spending is presented as a panacea for all our economic ills. Is private industry partially stagnant? We can fix it all by government spending. Is there unemployment? That is obviously due to “insufficient private purchasing power.” The remedy is just as obvious. All that is necessary is for the government to spend enough to make up the “deficiency”…

Here we shall have to say simply that all government expenditures must eventually be paid out of die proceeds of taxation; that to put off the evil day merely increases the problem… Once we look at the matter in this way, the supposed miracles of government spending will appear in another light.

But who will look into this light?

Not Democrats… certainly. And Republicans only view the light when Democrats direct the show.

When in the director’s seat, Republicans spend grandly, magnificently, lavishly. Their vision suddenly fails them.

Our vision detects another light, presently hoving into view. It is the headlight of the steam locomotive barreling down the rails…

The locomotive is the nation’s debt. It is careening for $30 trillion… $35 trillion… $45 trillion.

Meantime, the economy is sweating and panting dreadfully. It is struggling to outrace the thing.

This hulking menace adds speed with every additional dollar of debt… another shovelful of coal into the boilers.

The onrushing light grows brighter by the day. One question remains in our estimation — which we cannot yet answer:

When is the inevitable crack-up?