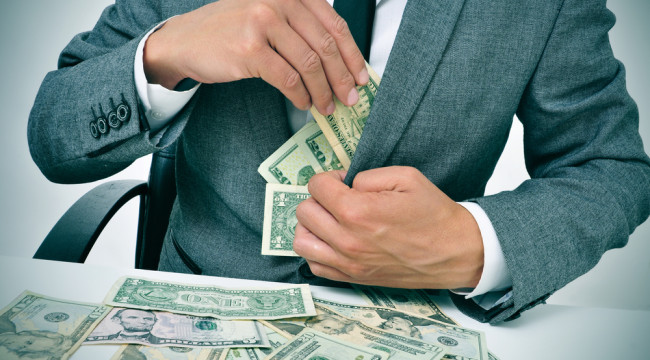 The American Disease: I Deserve to Get Away With Anything and Everything

Here’s the American Disease in a nutshell: entitlement and power means you never have to apologize for anything. Public relations might require a grudging, insincere quasi-apology, but the person with power can’t evince humility or shame–he or she doesn’t have any.

What the American with power does have in nearly limitless abundance is a grandiose yet unacknowledged sense of entitlement and a volcanic sense of indignation. For the powerful feel entitled not to be questioned, and entitled to the supreme arrogance of never apologizing for anything.

Their indignation at being pressed to account for their decisions knows no bounds–how dare anyone question my actions? It’s outrageous! I don’t deserve this!

The most entitled and indignant couple in America might well be Bill and Hillary Clinton, famously crying poor while assembling a net worth in excess of $100 million.

Their resentment at being challenged to account for their actions is palpable. When questioned about his sordid encounters in the White House, Bill Clinton’s body language and tortured, seething responses spoke of a grandiose entitlement to get away with anything and everything. We could almost hear his inner dialog: “Nobody questioned Jack Kennedy’s multiple affairs–I deserve to get away with it, too.”

Hillary is expressing the same seething resentment at being questioned about her private email server. Her phony, resentful half-apology reminds us of nothing more than a spoiled, entitled teenager shouting, “OK, so I wrecked the car! So what? It’s just a lump of steel and plastic. What about me? I don’t deserve this! So what if I ran over that old guy. I didn’t mean to. Why should my life be ruined because somebody found out?” And so on.

In America, supposedly a land built on merit and accountability, being entitled and powerful means you never have to apologize for anything or be accountable for your actions. Take a look at entertainment/sports “heroes” grudging, phony PR-apologies, carefully scripted to sound sincere yet fake to the core, as the “heroes” arrogance and sense of entitlement is so obviously grandiose.

After all, the “hero” was showered with sports cars, bling, “dates” with attractive women and all the other benefits of stardom. Just because he 1) beat a woman senseless 2) date-raped a woman, etc. etc. etc., well, “I should get away with anything and everything because I’m rich and famous.”

How about our financial and political titans? Their mantra when challenged, “I don’t recall,” is another spoiled-teen dodge tailored for the courtroom. One wishes that their cross-examination featured the same techniques used to interrogate “high value subjects” in the Global War on Terror in some remote, cold cell.

What might they confess to when waterboarded and subjected to sleep deprivation for a few days? Would we finally get the truth? or would they blubber more lies in the hopes their inquisitors would actually believe them?

The more a society glorifies its virtues, the emptier those virtues are in the real world. Merit means little in a society of political dynasties and inherited wealth, a society where wealth and elite membership trumps virtually everything else.

Accountability has been reduced to a meaningless buzzword spewed by the chattering class, much like the hollow slogan “middle class.” Neither accountability nor the middle class exists except as founding myths or convenient PR fantasies for those seeking to exploit the myths and the fantasies for personal gain.

No parody of spoiled-teen entitlement and the limitless arrogance of power could possibly top the Clintons. Were someone to write a satire in which a political power couple loudly touted their abject poverty while amassing a personal fortune of $100+ million, the fable would be roundly dismissed as exaggerated, absurd, cartoonish.

Yet the Clintons exist, as do hundreds of other entitled, arrogant, wealthy powerful people in America who never apologize for anything because humility is for the little people.

The only thing as grandiose as this sense of entitlement is the hubris it engenders. Bring it on, as G.W. Bush famously said. By all means, bring it on.