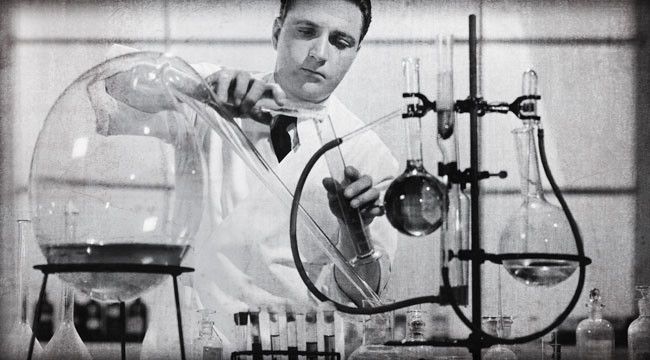 The Alchemist's Dream: Make Anything

When Capital Jean-Luc Picard wants a steaming beverage in his ready room aboard the Starship Enterprise, he just utters those words. The ship’s “replicator” then assembles the necessary atoms — including those for the cup — and produces it, ready for the drinking. Picard thinks nothing of it — it’s hardly more remarkable to him than a microwave oven is to us today. Just as we now use radio waves to excite atoms and generate heat in our own kitchens (which would have been mind-blowing in the 1950s), his replicator uses some fancy energy technology that is never quite specified in Star Trek: The Next Generation to get atoms to self-assemble into food and drink.

That’s science fiction, but it’s actually not impossible. When you see an industrial 3-D printer working today, with a little poetic license you can glimpse the beginnings of something similar. A bath of liquid resin lies inert, a primordial soup. A laser begins tracing patterns in it, like lightning. Shapes form and emerge from the nutrient bath, conjured as if by magic from nothing.

At the huge scale, there are already 3-D printers that can make a multistory building by “printing” concrete.

Okay, poetic license revoked — we’re still a long way from molecular self-assembly, or at least in any useful way. A 3-D printer can only work with one material at a time, and if you want to combine materials you need to have multiple print heads or switch from one to another, like the different color cartridges in your desktop inkjet printer. We can only work at a resolution of about 50 micrometers (the thickness of a fine hair), while nature works at a thousand times finer detail, of a few tens of nanometers. And there’s nothing self-assembling about the way a 3-D printer works: it does all the assembling itself, with the brute force of a laser solidifying a powder or liquid resin, or melting plastic and spreading it down in a fine line.

But you get the point. We can imagine something, draw it on a computer, and a machine can make it real. We can push a button and an object will appear (eventually). As Arthur C. Clarke put it, “any sufficiently advanced technology is indistinguishable from magic.” This is getting close.

You may think of 3-D printing as bleeding-edge technology today, the stuff of high-end design workshops and geeks. But you may have encountered a 3-D printer already, in ways so prosaic you didn’t even notice.

Take custom dental fittings, such as those that change the alignment of the teeth over months with a series of slightly different mouth guards, each of which shifts the teeth imperceptibly into a new position. In that case, a dental technician scans the current position of your teeth, then software mathematically models all the intermediate positions to the desired endpoint. Finally, those positions are 3-D printed in plastic as a series of mouthguards that you wear, each for two or three weeks, until your teeth are in the new position.

Likewise for the prototypes of practically every gadget you’ve ever bought, and the architectural models for the newer buildings around you. Custom prosthetics are 3-D printed, if you’re lucky enough to have a dentist who can replace a crown in a single sitting, that’s probably 3-D printed (they sprayed with enamel) in the office. Doctors have printed and replaced an entire human jaw from titanium.

Commercial 3-D printing only works with a few dozen types of materials, mostly metals and plastics of various sorts, but more are in the works. Researchers are experimenting with more-exotic materials, from wood pulp to carbon nanotubes, that give a sense of the scope of this technology. Some 3-D printers can print electrical circuits, making complex electronics from scratch. Yet others print icing onto cupcakes and extrude other liquid foods, including melted chocolate.

At the huge scale, there are already 3-D printers that can make a multistory building by “printing” concrete. Right now that requires a 3-D printer the size of the building, but it may someday be built into the cement truck itself with a concrete that uses positional awareness to decide where to put down concrete and how much, directly reading and following the architect’s CAD plans.

Meanwhile, researchers are working just as hard at moving in the other direction: 3-D printing at the molecular scale. Today there are “bio printers” that print a layer of a patient’s own cells onto a 3-D-printed “scaffold” of inert material. Once the cells are in place, they can grow into an organ, with bladders and kidneys already demonstrated in the lab. Print with stem cells, and the tissue will form its own blood vessels and internal structure.

Today’s vision for 3-D printing is grand in ambition. Carl Bass, the CEO of Autodesk, one of the leading companies making 3-D authoring CAD software, sees the rise of computer-controlled fabrication as a transformative change on the order of the original mass production. Not only can it change the way traditional consumer goods are made, but 3-D printing can also work on scales as small as biology and as large as houses and bridges.

In an essay he published in the Washington Post, Bass explained what’s so different about this way of making things:

The ability to produce a small number of high quality items and sell them at reasonable prices is causing an enormous economic disruption. In it, you can see the future of American manufacturing.

In a computerized manufacturing process like 3-D printing, complexity and quality come at not cost… A traditional paper printer can print a circle or a copy of the Mona Lisa with equal ease. The same rule applies to a 3-D printer.

From a design perspective, this is revolutionary. It is no longer necessary for the designer to care or know about the manufacturing process, because the computer-controlled machines figure that stuff out for themselves. The same design can be fabricated in metal, plastic, cardboard, or cake icing. (it might not be very useful in all those materials, but it would exist.) “We can separate the design of a product from its manufacture for the first time in history, because all of the information necessary to print that object is built into the design.” Bass explained.

Even better, as 3-D printers proliferate and become used for small-scale bespoke or custom-made manufacturing, they can provide a more sustainable way of making things. There are little or no transportation costs, because the product is made locally. There is little or no waste, because you use no more raw material than you need. And because the product is custom-made just for you, you’re more likely to value it and keep it longer. Personalized products are less disposable; you simply care about them more.

Rich Karlgaard, the publisher of Forbes magazine, thinks that 3-D printing “could be the transformative technology of the 2015-2025 period.” He writes:

This has the potential to remake the economics of manufacturing from a large scale industry back to an artisan model of small design shops with access to 3-D printers. In other words, making stuff, real stuff, could move from being a capital intensive industry into something that looks more like art and software. This should favor the American skill set of creativity.

But also remember what 3-D printing and any other digital production technique cannot do. They offer no economies of scale. it is no cheaper on a per-unit basis to make a thousand than one. Instead, they offer exactly the opposite advantage: there is no penalty for changing each individual unit or making just a few of a kind.

It is the reverse of mass production, which favors repetition and standardization. Instead, 3-D printing favors individualization and customization. The big win of the digital manufacturing age is that we can have our choice between the two without having to fall back on expensive handcrafting: both mass and custom are now viable automated manufacturing methods.

(This essay was excerpted from Chris Anderson’s book, Makers: The New Industrial Revolution.)

Ed. Note: We believe that 3-D printing not only has a chance to materially improve peoples’ day-to-day lives… but also make gobs of cash for investors who have the foresight to put their money into certain industry pioneers. Today’s Daily Reckoning email edition gave readers access to a special report from an in-house expert who says you stand to make upwards of $50,000 from this technology. If you didn’t get it, you missed out. Don’t let that happen again. Sign up for the Daily Reckoning email edition, for FREE, and start getting the whole story.