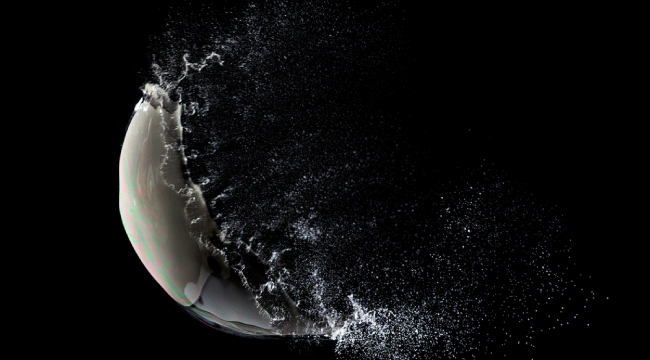 “Has the world entered the terminal phase of a gigantic credit and asset bubble?”

That question opened a very thought-provoking — and nerve-wracking — talk by well-known economic commentator Marc Faber at the World War D conference in Australia, which I attended and spoke at recently. That was just the beginning. His message is worrisome for investors, to say the least.

But I have a way to play it.

Terminal phase? If that doesn’t get your attention, nothing will. “Panics do not destroy capital,” Faber continued, citing a classic tenet of Austrian School economics. “They just reveal the extent to which it has been destroyed already by bad decisions.”

Even worse, per Faber, most of the world’s “bad decision” makers — central bankers, political hacks, faceless bureaucrats and corporate drones — pay no personal price for being wrong. One of these days, they’ll retire, receive their pensions and live comfortably… or so they think.

Foremost among bad decision makers, per Faber, is the Federal Reserve. It’s allegedly an “independent” central bank. Yet clearly, the Fed marches to a tune called the U.S. government. Year after year, the Fed provides liquidity so the Treasury Department can issue checks against an out-of-control budget passed annually by Congress, thus flooding the world with dollars.

That is, the Fed prints prodigious piles of money to pay for exploding levels of federal spending. The following chart, from the St. Louis branch of the Fed, illustrates the adjusted U.S. monetary base since 1920. 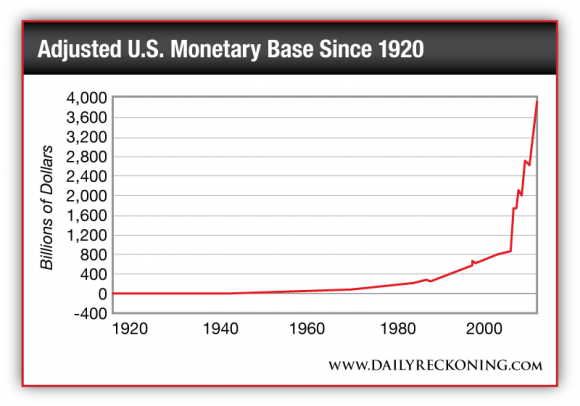 As this chart shows, U.S. monetary policy has been expansionist since the 1960s. We’re dealing with a multigenerational problem that’s now systemic. That is, “too much spending” is how it all works. It’s become part of the national DNA, so to speak.

Where does this lead? Well, per Faber, things “will go up in flames, at some point.” Then he said, dryly, “That will be an unpleasant event.”

Looking back, it’s not that the underlying U.S. economy, pre-1960s, somehow required large amounts of new Fed-created monetary base to function. In the olden days, the U.S. economy worked reasonably well. For example, in the 1960s, someone could buy a new car for about $2,000, as opposed to, say, $30,000 for a new car today. Tuition at Harvard was $2,000 in the late 1960s, versus over $50,000 today. Any raw inflation in those disparities? Anyone?

Also note, from the Fed chart, that even during and after World War II — the 1940s — government spending didn’t lead to a permanent expansion of the fundamental monetary base. That’s just not how things were done back then — even big, important things.

So what’s the current problem? Why grow the money supply? It’s because, since the 1960s, the federal government has continually required more and more funds every year, over and above the tax take, to balance its accounts.

Look at it another way. “To govern is to choose,” said the late British Prime Minister Margaret Thatcher. But today, government doesn’t choose; it funds pretty much everything that can muster a political constituency.

In other words, the great, overriding issue of our time — the modern version of “Rome is burning,” so to speak — is how to pay for Big Government and its welfare state, plus the counterpart “warfare state.” These welfare and warfare states are both, at root, reflections of political hubris within the ruling political class. It’s power run riot. Forget about “In God We Trust.” The motto of modern governance is, “We rule because we can.”

Sad to say, vast levels of Big Government reflect a self-serving political ethos that believes fervently in burdening the future with unpayable debt from the past. For example, I once heard the late Sen. Edward Kennedy say, “We won’t be here to deal with the problem,” when asked about the U.S. national debt. “Somebody else will have to deal with it,” he added, helpfully.

Even worse, for those of us still among the living, is the recent, rocket-like takeoff of U.S. money supply after the crash of 2008. Clearly evident in the Fed chart above, this explosion of monetary base reflects federal bailouts of banks, states, cities and politically favored groups, and other post-crash spending on “stimulus” and the like. It was politicians, bureaucrats and bankers doing the proverbial “something” in the face of a total mess. But we’ve spent the money, and we’re still in deep trouble. Now what?

It’s not hard to conclude that the U.S. monetary system broke down catastrophically in 2008, triggered by the subprime mortgage crisis. That is, by 2008, much of the U.S. economy — and the global economy, to boot — was tied up with the mortgage finance bubble. This bubble was fostered by U.S. government policy to expand money supply and let people, businesses and other government entities borrow funds, even with no possibility of repayment.

That mortgage bubble ended suddenly, you recall, in the fall of 2008. Blame Lehman Bros. if you wish, but there’s more to it than just that. The entire dollar-based financial system was on the verge of breaking down overnight. In 2008, I heard former Treasury Secretary Paul O’Neill say that Americans could awaken one morning and “ATM machines across the country wouldn’t be working.” More recently, in 2013, I heard former President George W. Bush say, “All hell was about to break loose.”

So what did the Fed do? It opened the money spigots, set interest rates at a shadow above zero percent and made it clear that low-rate monetary policy would last indefinitely. Indeed, now with growing levels of federal debt, it has become all but impossible for the Fed to raise interest rates, lest payouts quickly overwhelm the government’s ability to meet its obligations.

Meanwhile, after 2008, the Fed and Treasury Department began to monetize government bonds, via quantitative easing (QE). In a sense, per Faber, it’s the death knell of the dollar. That is, it’s the first round of monetary hyperinflation. Of course, hyperinflation hasn’t happened yet… or we’d know about it — wheelbarrows full of currency and such. Still, dry monetary tinder is all over the forest floor, awaiting the next lightning bolt or stray cigarette butt, so to speak.

It’s fair to ask if this new Fed largesse — increased liquidity and low interest rates — actually accomplished anything. After all, the proverbial wings are still on the airplane, right? All hell didn’t break loose, as former President Bush feared.

Looking around, we still have an economy, and it seems to work. You’ve got money in the bank. You buy groceries at the store and fill your car’s tank at the gas station, right? All that, and when things go wrong in other parts of the world — Ukraine or such — money flows to the U.S. and the dollar strengthens, right? Well, yes… but for how long?

“The problem with creating excess money supply,” states Faber, “is to know where it goes. Not all money lifts all prices and assets equally… Prices rise differentially.” In other words, advises Faber, what happens depends on timing and circumstances.

For example, increased money supply can create a bubble in any one or more key metrics such as wages, energy, food, other commodities, real estate, bonds, stocks, “collectible” art and much more. Sometimes, you don’t really know where the next bubble is until it’s ready to pop. Tech, anyone? College tuitions? Municipal pensions? Even China could trigger a collapse, now that the Middle Kingdom has leveraged its export earnings into a credit bubble, reflected by empty, “see-through” cities and warehouses full of copper ingot that back nonperforming loans.

At this point, let’s consider what excess money supply has done to the price of gold. When it comes to gold, the U.S. Fed does not work alone, to be sure. That is, central banks across the world coordinate respective monetary policies. Results are reflected in the price of gold, which acts as a sort of monetary barometer.

Here’s a chart that compares the combined money-creation efforts of the U.S., Britain, Europe and Japan with gold since 2001. 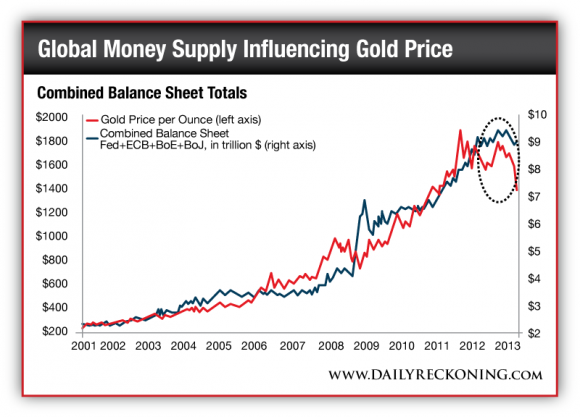 For most of the past 14 years, gold’s continuing price rise followed money supply, reflecting a global investment consensus — certainly among gold buyers — that overall money supply was growing too fast. Clearly, many excess dollars-pounds-euros-yen moved into yellow metal, to preserve wealth and ride a rising tide. Even with gold’s recent price pullback, it’s clear that gold more or less tracks money supply.

What’s the source of demand for gold? Quirky gold bugs, right? In terms of quantity, some gold buying is retail, with small purchases by, say, people just like many of you — or much larger purchases by very wealthy individuals, some of whom subscribe to The Daily Reckoning, I should add. Quite a bit of gold demand also comes from respectable funds and institutions, including blue chip names like Northwest Mutual Life Insurance Co. and the University of Texas.

Over the past decade, more and more gold has moved to central banks, such as in China and Russia, across the Middle East and elsewhere. The recent price decline and plateau for gold is more than likely a momentum pause in the long scheme of things. The pullback allows global gold stocks to rebalance while investors across the world await more news and direction of U.S. monetary policy. Give the process some time…

Where could gold go from here? From current levels at $1,300 per ounce, gold prices could move upward toward $2,000 on fairly simple “supply” news, like a mining disruption in South Africa, let alone a major announcement of gold reserve numbers by, say, the central bank of China. For all of China’s economic problems, accumulating gold is not one of them.

Looking downstream, some gold bulls believe gold could eventually move to $5,000 or $10,000 an ounce (with silver climbing up toward $200 or $400 per ounce). Again, give it time. One key reason for price bullishness is that sooner or later, central banks across the world will need more gold when they stop trusting dollars — let alone U.S. government bonds — as a source of preserving wealth.

Indeed, under the right circumstances (or wrong circumstances, depending on your viewpoint), foreign dollar holders could quickly decide to sell U.S. bonds and buy gold to find a path to safety for their own banking systems. In the end, as Marc Faber emphasized, and as I’ve argued over and over again here in the DR, gold is a key asset for preserving wealth over the long haul. The dollar suffers from decades of monetary mistakes. On the other hand, gold is a legitimate long-term hard asset with which to preserve wealth.