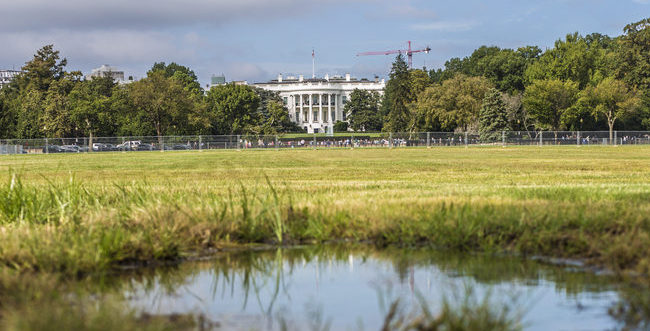 It would be the first major overhaul of the tax code since 1986… the “biggest tax cut of all time,” as the president calls it.

Will it make the American economy great again?

Or will it vanish into the swamp… like Trump’s plan to replace Obamacare?

These are the questions that furrow our brow today…

To double the standard deduction for both couples and single filers (to $24,000 and $12,000, respectively)… and eliminate the estate tax.

The president assured us this is a plan for every man jack… that “the rich will not be gaining at all.”

But the rich did gain yesterday…

Stocks surged to record levels yesterday afternoon as the president trumpeted his plan.

It was the promise of tax cuts that helped inflate the Trump “reflation trade” since the November election.

Now they’re in sight — if not yet within reach.

The plan’s promises are many… but its details few.

The devil dwells in the details, of course. But so does God…

Where is the devil in Trump’s plan… or God?

Without corresponding spending cuts or other means of generating revenue, wouldn’t the tax cuts add trillions to the debt?

The Committee for a Responsible Federal Budget estimates the plan would add $2.2 trillion to the national debt over the next 10 years.

Kyle Pomerleau of the Tax Foundation pegs it at $5 trillion if every provision makes it home.

But Trump’s tax plan must first make it through the swamp. And therein lies a vast tale…

Trump says he wants filing a tax return so simple it could fit on a postcard.

That means simplifying the tax code.

How does he turn the system to his advantage?

How does he work the angles?

At 74,608 pages, the United States Tax Code features lots of angles to work… and dark corners where swamp creatures lurk.

Each is out to keep his bucket in the stream… his snout in the trough… and his BMW in gas.

I’m heart and soul for tax reform, says the lobbyist. Just make sure it’s the other fellow’s taxes being reformed.

“They will take all of tax reform down to just keep their one special provision.”

And so it goes, with a hundred industries, each with its battalions of lobbyists.

“This could be the single issue that brings out the army of lobbyists more than any other issue we’ve seen in recent years,” says Craig Holman of Public Citizen, a government accountability outfit.

Will Congress withstand the onslaught?

Goldman Sachs predicts the final tax cut — if it passes at all — will be “a pale shadow of its initial proposal.”

Here at The Daily Reckoning, we have our own answer… an answer affirmed by one veteran lobbyist:

“I can’t even imagine Republicans doing full-fledged tax reform that steps on toes.”

We suggest one slight amendment:

“I can’t even imagine Republicans or Democrats doing full-fledged tax reform that steps on toes.”

“You have no idea how hard this is going to be,” warns outgoing Republican Sen. Bob Corker of Tennessee.

And that is why we expect it to fail…