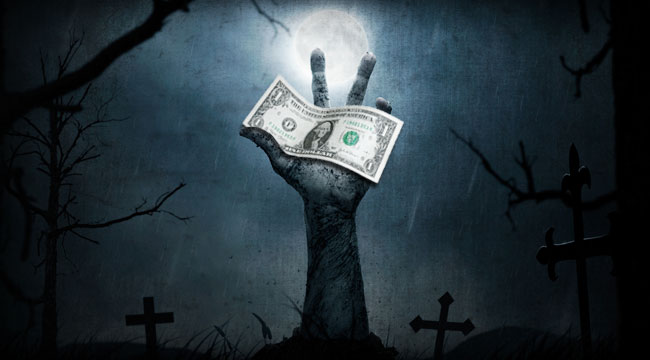 The Surprising Reason QE Lives On

[Ed. Note: QE3 finally ended today, and reactions have been pouring in from across the financial world. But the question we asked in today’s email edition was… did it really even matter in the first place? Our own Jim Rickards thinks not… “We’re in a structural depression & will remain so.” he tweeted in today’s issue, “QE only affects asset prices.” Below, Bill Bonner offers his thoughts on the passing of this “economic instrument” and why its death may not be as permanent as you think…]

Hang the black crepe. Get out the whiskey. Say goodbye. And try to keep the tears from your eyes.

The Dow rose back above 17,000 points yesterday, near its all-time high. Higher stock prices should settle nerves at the Fed’s FOMC meeting. It should leave the central bankers free to let their emergency bond-buying program die in peace.

The Financial Times announced the end even before it happened. On Monday, its headline read: “RIP QE: The quiet death of a radical US monetary policy.”

But the Fed has to be careful. If it announces that QE is truly dead, it is likely to set off some untoward scenes of wailing and keening in the stock market. Investors will feel a deep sense of loss.

…although QE may be breathing its last breath, its offspring will live on.

The trouble with death is it is permanent. The dead stay dead. And if investors believe QE will never rise again, they may be disheartened. Or even feel betrayed.

Remember, the central bank was the life of the party. It was central banks that brought the booze… leading to the big run-up in US stock prices over the last five years.

If QE is history, most likely so is the bull market on Wall Street. The party is over. Stock prices are likely to put on their coats and hats and go back whence they came.

The Fed has already given out the word that, although QE may be breathing its last breath, its offspring will live on.

The Fed will not be selling its roughly $4.5 trillion portfolio of bonds… or even allowing it to expire of natural causes.

In the normal course of events, these bonds would mature and then — as all of us will — disappear. But Janet Yellen tells us it will be reinvesting the funds from maturing bonds in new issues. In other words, it will continue to soak up new bonds, helping to keep a lid on yields.

We doubt that will be enough…

An economy that depends on debt needs more and more of it to get the same buzz going. The first time you pump a lot of credit into an economy’s veins you get quite a rush. It’s only later that the shakes begin.

As debt grows, it becomes harder for the economy to grow. Because the resources needed by the future have already been claimed by the past.

Ultra-low interest rates disguise the problem and postpone the reckoning, but they can’t put it off forever. A man who buys a cup of coffee today on his credit card has created an obligation that will eat into some of tomorrow’s income.

If he allows the interest on that debt to compound, he could still be paying for that cup of coffee 10 or 20 years from now.

This debt drag has been explored in a number of economic studies. According to Van Hoisington and Dr. Lacy Hunt of Hoisington Investment Management:

If you borrow to invest in a productive undertaking, the stream of income you receive from that undertaking may be enough to pay off the debt and even give you a profit.

“…an excessive level of debt poses both acute and chronic risks.”

But if you borrow — for Obamacare… for war in the Middle East… or for Wall Street bonuses — you’re not in a better position to pay off your debt; you’re in a worse position.

That is the conclusion of a rather dense paper by a quartet of Ph.D.s laboring for banking think tank the International Center for Monetary and Banking Studies.

Their paper — “Deleveraging? What Deleveraging?” — shows us that the world’s debt load is still increasing. It also tells us that “an excessive level of debt poses both acute and chronic risks.”

Nothing surprising about that…

But add in slow growth, and it puts you into a “vicious loop” in which you can’t pay down debt. The authorities try to stimulate growth. They run deficits… and lower interest rates to encourage borrowing… believing that these things will make it possible to “work our way out of debt.”

Instead, we just dig a deeper hole — increasing the risk of default, depression and deflation.

Which is why we wouldn’t be so quick to throw dirt on QE’s face. It might not be entirely dead.

And come the first alarm in the headlines — that the stock market has cracked… or the economy is sinking — we will likely see a resurrection.

Ed. Note: Readers of today’s Daily Reckoning email edition got a much more in-depth discussion of the “passing of QE,” complete with additional analysis and commentary, as well as several chances to discover a handful of unique profit opportunities. There’s a larger discussion going on that you’re not a part of. Get in on it for yourself, by clicking here and signing up for FREE, right now.

This article originally appeared in Bill Bonner’s Diary of a Rogue Economist.