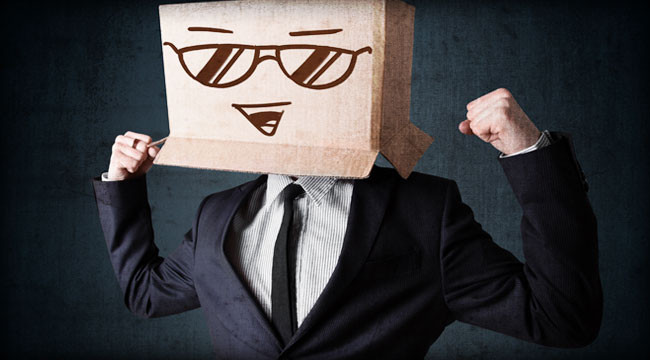 Since the deal in Washington the markets have celebrated. The stock market indexes have climbed higher than when the shutdown began. Optimism has paid off again in 2013.

“It has to be said that for most of the past three decades or so, optimism has paid off,” bank analyst William Vincent opined in a recent column for SNL Financial titled “Where Are the Bears?”

But has it really?

Vincent’s column looked at the lopsided consensus on a number of big stocks as a warning. (Apple, for instance, has 43 buys against just three sells.) In that column, he also rolled out the bullish refrain by citing the returns of various stock market indexes. The Dow is up 358% since 1984. The Nasdaq, though it remains below its 2000 peak, is still up 2,765%. The indexes deceive.

“If you really track the mortality of companies,” says Carlo Cannell, “you’d conclude the market does not have the upward bias everyone thinks it does. The market is actually a well-tended garden.”

“If you really track the mortality of companies, you’d conclude the market does not have the upward bias everyone thinks it does.”

Cannell is one of those rare birds, an investor who has consistently made money on the short side betting against companies. (The quote comes from The Art of Value Investing, a collection of quotes from some very good investors, edited by Whitney Tilson and John Heins. Like a bag of chips and a jar of salsa, it’s not a book you consume in one go. It’s good for dipping.)

Cannell’s analogy of a well-tended garden is perfect. The makers of the index weed out the losers. By doing so, they make the returns on stocks look greater than they appear.

“Most stocks lose money,” is the way John Del Vecchio and Tom Jacobs start off their new book, What’s Behind the Numbers? The authors want to help prevent you from getting snookered in the market. They start by making sure you understand Cannell’s point.

They cite a study by Blackstar Funds that looked at the Russell 3000 from 1983-2007. This is a stock market index that represents 98% of the all the liquidity in the U.S. market. Blackstar’s study, though, included all the stocks that qualified for inclusion in the index, even ones that de-listed. This universe of stocks had 8,054 names.

Here is a chart from the study: 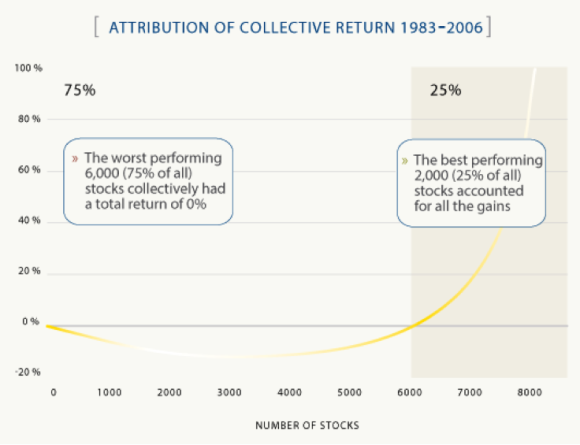 All is to say a small number of stocks provide most of the returns. That also means there are a lot of losers.

This reminds me of a quip famous short seller, Jim Chanos, likes to use. Chanos is a guy who pokes around looking for stocks that are going to fall apart for one reason or another. Sometimes these reasons involve thievery and fraud, which Chanos cheerfully exposes. He is most famous as the guy who sniffed out Enron.

This doesn’t make him popular among Wall Street’s bulls. Short sellers never are. (If there was ever a Wall Street version of the old board game Clue, you could swap out Professor Plum and the gang with prominent short sellers. Then Chanos could be the guy in the library with the knife in his back, or maybe Cannell gets the lead pipe in the ballroom.)

Anyway, people like to poo-poo short selling because your upside is capped — you can only make 100% if a stock goes to zero — and your downside is theoretically infinite.

But as Chanos says, “I’ve seen more stocks go to zero than to infinity.”

There is another reason the indexes are less dazzling than they appear. They do not account for inflation. A dollar today is not worth as much as a dollar in 1983. You must account for the deprecation of the currency.

Again, we turn to the useful Del Vecchio/Jacobs book. They cite the inflation-adjusted returns for the S&P 500 from 1950-2009. This has the effect of knocking down the total return on the index by about 40%.

The authors also note the arbitrary nature of cutoff dates. From 1968-83, for example, the stock market as a whole delivered an inflation-adjusted return of zero.

Besides this, investors are their own worst enemies. They tend to buy when stocks are high and sell when they are low. Del Vecchio and Jacobs cite another favorite study of mine by Morningstar, which I’ve cited before as well in my own Invest Like A Dealmaker. Morningstar looked at the best fund of the decade from 2000-2010. It was Ken Heebner’s CGM Focus Fund. It returned 18% annually.

“I’ve seen more stocks go to zero than to infinity.”

But how did the average investor in fund do? Poorly. This is because most investors piled in after the fund was up 80% in 2007 — right before it fell 48%. Morningstar looked at the flow of funds in and out of CGM and concluded that the typical investor lost 11% annually, while Heebner was racking up gains of 18% annually.

What is true at the mutual fund level is surely true at the stock market level. I bet the typical investor has never made any money in stocks.

I turn again to The Art of Value Investing. I put little stars by some of my favorite comments in my copy. I noted that Seth Klarman, who leads the Baupost Group, had the most stars in my book. From the neck up, there is no one better as an investor. Here is one comment apropos of today’s discussion:

“We are big fans of fear, and in investing, it is clearly better to be scared than sorry.”

I agree and urge you to stay cautious

Ed. Note: If you’re not receiving The Daily Reckoning, you’re getting only half the story. Sign up for free right now and start getting the whole thing, every day, sent straight to your inbox.