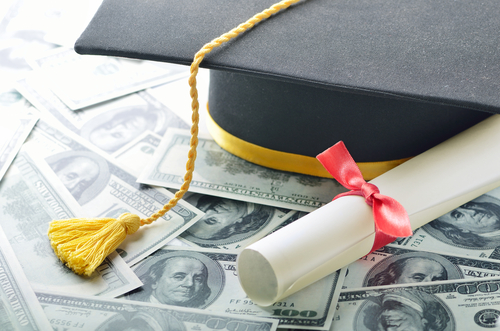 Colleges are good at getting people enrolled. They get kids lined up with education loans. The money goes to pay exorbitant prices on textbooks. It pays for meal cards. Tuition is crazy high. Parents go along and shell out until their bank accounts are barren.

What colleges are not good at is getting the kids degrees. And those without those degrees have a hard time getting a good job to pay back a student loan. Instead, they fall into delinquency, starting off life saddled with an unpayable debt.

According to Fair Isaac Corp. (FICO), delinquencies on student loans made in the last two years have reached 15%. The pool of loans made between 2005-2007 is almost as bad, with 12.4% past due. Bloomberg reports that “almost 60% of bank managers surveyed in December expect delinquencies to worsen in six months, FICO said.”

The analogy with housing is unavoidable. Do you remember 2007? The peak in the price of housing had come and gone. But the leverage of the major investment banks was peaking at over 30 times at Bear Stearns, Merrill Lynch and Morgan Stanley.

And in the middle of 2007, subprime delinquencies reached 15%. Catch that number? It’s the same as the student loan delinquency rate today.

Of course, when the subprime delinquencies hit 15%, that market was circling the drain, but few people realized it. In contrast, more and more people are realizing that there is a serious problem with student loan debt.

“This situation is simply unsustainable, and we’re already suffering the consequences,” stated FICO analyst Andrew Jennings. “When wage growth is slow and jobs are not as plentiful as they once were, it is impossible for individuals to continue taking out ever larger student loans without greatly increasing the risk of default.”

Curiously, Sallie Mae stock (SLM) rose on the delinquency news. But then again, the company would appear to be very much a going concern. Core earnings for 2012 were more than $1 billion, benefiting from the lowering of loan loss reserves and operating expenses.

Charge-offs increased to 4.19% of loans in repayment. Not to worry, says Sallie Mae: It expects that to decline in 2013. The company pays a 50 cent annual dividend, so it sure beats money market rates. And SLM says it will make $2.30 a share this year.

What could go wrong?

“You’re starting to see delinquencies pick up, and that trend is going to continue,” Compass Point Research & Trading’s Michael Tarkan told Bloomberg. “That’s the reality that we live with in student loans.”

The day after Bloomberg spilled the news from Fair Isaac, TransUnion made public that according to their work, “more than half of student loan accounts are in deferred status, where the repayment of the principal and interest of the loan is temporarily delayed. Deferred loans now represent 43.5% of all student loan balances.”

TransUnion points out that “more than half of college graduates under 25 are unemployed or underemployed — the highest rate in 11 years.” This makes going back to school and racking up debt a reasonable option.

“With the economy either in recession or slowly coming out of it during the study period, we had expected that student loan balances might increase as consumers frustrated with the job market went back to school to work toward a different career path,” said Ezra Becker of TransUnion. “However, the rate of growth we observed was truly eye-opening,” he added.

What kind of lender would be lending money to permanent students with bad prospects? The government, of course. “Between 2007-2012, federal loan balances jumped 97%, while private loan balances only rose 4%,” writes TransUnion.

The idea of students actually graduating from college is starting to get some attention. The New York Times reports:

“‘This is the first time in the history of modern higher education in which all the communities have come together — community colleges, research institutions, public universities, and small liberal arts colleges — and reached agreement that completion needs to be our most important priority,’ said E. Gordon Gee, the president of Ohio State University and chairman of the National Commission on Higher Education Attainment.”

The Times points out that 80% of students think they’ll graduate. Well, statistics show only half that number actually get the job done. So a report coming out this week calls for colleges to:

Another idea gaining attention: a $10,000 degree, a so-called 10K-B.A. The extremely smart head of the American Enterprise Institute writes that this is what he obtained. “It is true that I am no Harvard man,” he writes. “But I can say with full confidence that my 10K-B.A. is what made higher education possible for me, and it changed the course of my life.”

While traditional colleges wrestle with the quandary of passing out degrees, you might wonder if Sallie Mae’s dividend is safe. Everything looks peachy over there. But one should remember Sallie’s sister, Fannie, that paid $1.18 in dividends in 2006 and $1.50 in 2007. The stock traded just below $66 a share in August 2007.

Today, it fetches less than 28 cents, and dividends are a distant memory. Get ready: We could be on the precipice of a wild ride in the student loan market. How it will play out in real life will be as surprising as the wreckage of the housing crash.