How to Stop These 3 Thieves From Stealing Your Trading Profits

If you’re looking for trading advice, there are endless half-baked, half-assed, half-right gurus and strategists out there.

Thanks to the internet, you can find countless forums and message boards filled with anonymous mouth-breathers who are ready to spout their unprofessional opinion on whatever you ask.

And unfortunately, advice from so-called “professionals” in the mainstream financial media is sometimes just as bad.

With that in mind, here’s your best bet when it comes to figuring out the cutthroat trading game: Don’t trust anyone.

No one has your best interests in mind…except you. That’s why you can’t just listen to anyone. Heck, don’t even listen to me. My wife doesn’t– why should you be any different? Seriously, you must give everything you read or hear a skeptical once-over. That’s because most people have no idea what they’re talking about.

I’m now going to show you the three groups of people screwing you out of potentially winning trades. And why you need to steer clear of them.

Here they are (in no particular order):

Nothing’s better than a finance reporter if you want to make some money. Just do the opposite of whatever they say.

Don’t get me wrong, there are some great columnists and bloggers out there. But finance reporters – whose main job is to make up reasons why the market is up or down on any given day – have no idea what’s really driving the market. Don’t buy or sell based on what they say.

Think about it. By the time a major investment theme hits the newsroom, it’s probably too late to hop onboard. Plus, reporters are susceptible to prevailing investor emotions. If the herd is worried, the media’s worried. If investors are crazy bullish, so are the journalists.

Oh, and did I mention they’re mostly clueless when it comes to trends–the main drivers behind Wall Street’s winners and losers?

Don’t believe me? Just check out this collection of headlines about the price of oil from various financial media outlets over the past six months: 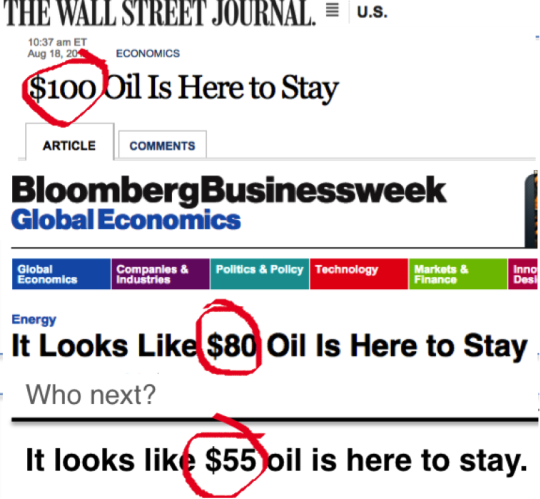 See? Clueless. If the headlines attract eyeballs, they’ll print it. Doesn’t matter if it’s good advice, bad advice, or no advice at all.

Yes, you read that correctly. Analysts— the professionals who rate stocks as buys, sells, holds, overweight, underweight, neutral, and a ton of other nebulous designations— aren’t going to help you pick winning trades or investments.

Because analysts’ ratings don’t mean jack, especially when it comes to bigger stocks that command a ton of coverage. These analysts have only one task: don’t stray too far from the pack. Don’t make any bold statements. And certainly don’t swim against the current. Analysts can lose their jobs if they stick their necks out.

Consider the following: According to Value Walk, analysts have rated 64% of all “growth stocks” as a “buy”. Now ask yourself, would you go out and buy nearly 65% of all the growth stocks on the market? Of course not. There’s no discretion in these ratings. If most stocks are rated a “buy”, then how the hell are you supposed to decide on two or three solid investments. If you use analyst ratings, it’s an impossible task.
They’re even worse if a stock begins to drop.

Whenever you see a popular stock begin to crash, analysts start popping up out of the woodwork defending their bullish price targets. Ignore them. While they’re trying to save face, the stocks will probably continue lower. Whenever you see analysts mount a staunch defense of any particular company, it usually means it’s a good time to cut and run. When they finally capitulate and lower their price targets or tell you to sell, you could have a nice buying opportunity.

“Active” fund managers–defined as those trying to beat a benchmark index like the S&P 500 — have turned in their worst collective performance in a quarter-century. According to Bank of America/Merrill Lynch, fewer than 20% of them beat the market last year.

That’s why you should never, ever, ever (ever) scoop up a stock because some “smart money” fund manager is talking it up on television.

Most of the time, when a money manager is talking up a stock, it’s because it’s one of his worst performing positions. Hey, they call it “talking your book” for a reason. Again (and I can’t seem to emphasize this enough) these guys are in it for themselves. They don’t give a damn if you make money or not. They just want their holdings to go up so they can keep their rich clients happy.

Investing is a war. There are forces that want to pillage your brokerage account for every cent you have.

P.S. Make money in ANY market—sign up for my Rude Awakening e-letter, for FREE, right here. Stop missing out. Click here now to sign up for FREE.