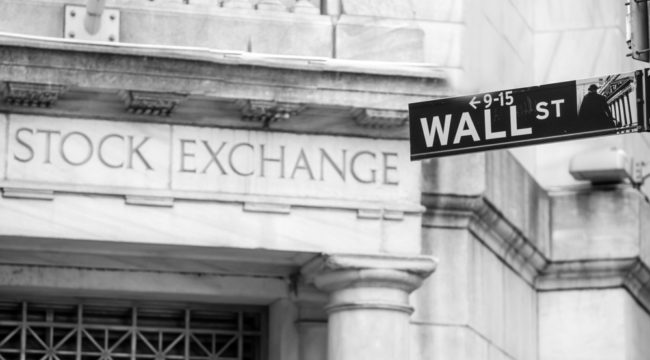 The Stock Market Cannot Crash in 2018

The stock market cannot crash in 2018.

This we have on excellent authority… and we encourage you to plan accordingly.

Put away all fear of trade war, geopolitical fireworks or Federal Reserve botchwork.

What evidence brings us to this happy conclusion?

And if not this year… when can you expect a stock market crash?

But first the news…

The Dow Jones turned in another boffo performance yesterday — its eighth-consecutive positive session.

Not since November has the index pieced together so lovely a streak.

The S&P and Nasdaq have taken the same general course.

That winning streak ended today — but all things good must end, as is often said.

What explains the market’s volte-face?

Investors must be at their old tricks, you conclude.

These past several years have taught them well… and they are once again “buying the dips.”

Yes, that must be it.

But do the figures support you?

The figures do not support you.

This IMX does not indicate investor “sentiment.”

It tracks the actual buying and selling of TD Ameritrade’s clients.

Whatever these numbers may be… bullish they are not.

Yet stocks just strung together their finest stretch since November.

So what accounts for their mysterious strength?

Who’s buying, in other words?

And to the larger question… why can’t the stock market crash this year?

According to Daily Reckoning associate Wolf Richter, we can reduce the answers to two words:

In the first quarter of the year, corporations have purchased their own stocks at a record clip.

At the going rate, 2018 will be a record year for buybacks: 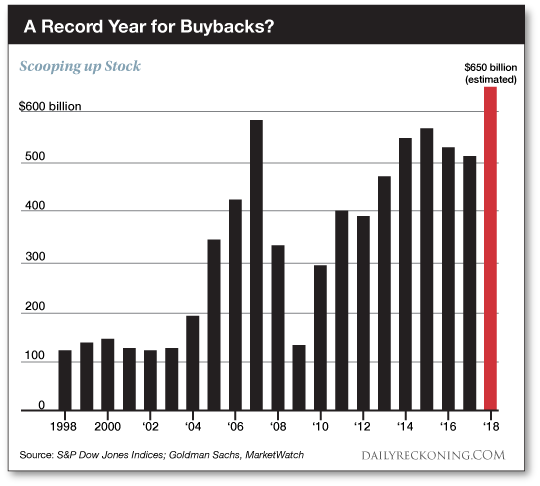 Corporate tax cuts take much of the credit — companies are plowing their bounty into buybacks.

And these record buybacks should cushion whatever blows the market absorbs this year.

With this kind of corporate buying pressure in the market, it’s very hard for shares to crash no matter what else is going on… Companies will pile into the market at every dip and buy as high as possible. It’s unlikely the overall market can crash this year no matter what happens. And they’ll be able to prevent their shares from crashing.

Richter adds that corporate buybacks have surged on days when the broader market was selling off.

These buybacks halted the selling.

Meantime, The Wall Street Journal informs us that the 20 most “bought back” stocks have risen over 5% so far this year — on average.

The S&P overall has risen only 2%.

But do record buybacks mean the bull market will rage once again this year?

No, not necessarily, says Richter.

These buybacks establish the floor. They do not raise the ceiling:

Overall, the S&P 500 may zig-zag lower in 2018, and even share buybacks may not be able to stop it, but it’s unlikely the overall market can crash this year no matter what happens.

Two cheers for buybacks, if so.

Preventing a crash is far from nothing — even if the way ahead may be a zig-zag.

But these buybacks cannot continue indefinitely.

What happens when the fireworks fizzle?

As Richter notes, the tax cuts supporting them are “a one-time trove of money. Once it’s used up, it’s gone.”

“Then what?” he wonders.

We wonder as well.

We’re laissez faire to the marrows.

If corporations choose to buy back their own stock rather than invest in long-term productivity… that is their decision alone.

Let their shareholders reward them or punish them as fit.

But the game has its limits.

At some point a business must justify its stock price through higher productivity — not parlor tricks.

That same index devoted 50% of its profits to buybacks.

Might we here have an answer for America’s stagnant productivity?

Or at least a partial answer?

Every dollar sunk in buybacks is a dollar unspent on plants… equipment… research and development.

But let us come down from our box of soap and turn to the question at hand.

If buybacks will keep stocks afloat this year… when can you expect the crash?

This is the conclusion of Scott Minerd, Global chief investment officer at Guggenheim Partners:

For the next year … equities will probably continue to go up as we have all these stock buybacks and free cash flow… Ultimately, when the chickens come home to roost and we have a recession, we’re going to see a lot of pressure on equities especially as defaults rise, and I think once we reach a peak that we’ll probably see a 40% retracement in equities.

This market’s current temperament feels so much like either Japan in 1989 or the U.S. in 1999.

A team of analysts at Goldman Sachs circle 2019 as well:

The backdrop for stock returns appears less favorable in 2019. Our economists project the (Federal Reserve) will tighten interest rates eight times during the next two years, economic growth will decelerate to 2.2% in 2019, and bond yields will likely climb towards 4%.”

Of course, the “big one” could come tomorrow… next week… month.

But maybe these stock buybacks will keep the show going through the end of the year at least.

And maybe it is time to get while the getting is there to be gotten.

Whether the end comes this year, next year or the year following…

We can only hope the gods are kind.