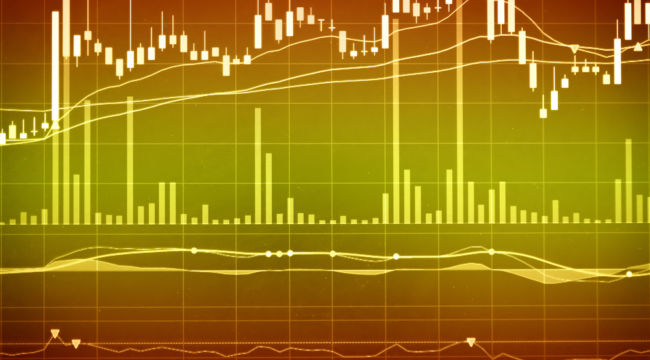 But today we raise a celebratory cheer…

A cheer for the temporary unemployment of one subset of furloughed federal employees.

We refer to the government statisticians who collect, sort, analyze, worry, torture and weaponize economic data.

For without statistics the government is all thumbs, a plodding doofus… a fumbling cyclops speared through its one and only eye.

This beast forms a greatly reduced menace to American liberty.

And to be governed, noted 19th-century philosopher Pierre-Joseph Proudhon:

We might file additional torts… but we operate on a strict word count.

We prefer to be uninformed rather than misinformed.

We therefore relish the prospect of going uninformed about the latest GDP numbers, for instance.

Government at all levels is credited with a thumping 36% of U.S. GDP spending.

But assume the government pays a fellow to dig a hole. Assume further it pays him to refill it.

By the official telling, you have just witnessed an increase to the gross domestic product.

Imagine further that the charade was financed through debt.

In its GDP calculations, the Bureau of Economic Analysis suggests debt-financed government spending adds authentic oomph to the economy.

Thus, it is not income. It is “artificial stimulus.”

Subtract the artificial stimulus, Baker argues… and real GDP has declined an average 7.45% each year since 2007.

On a similar note…

A fellow by the name of John Williams captains the website ShadowStats.

His stated purpose is to expose and analyze “flaws in current U.S. government economic data and reporting.”

The government adds a cup of water to a cup of milk, for example. Thus may it claim to produce two cups of “milk.”

Here is how official GDP stands against ShadowStats’:

Revealed is a roughly 4% difference.

Which data do you believe?

Redirect your attention to the inflation rate…

But if you measure inflation as the government measured inflation in 1980… a different sketch emerges. 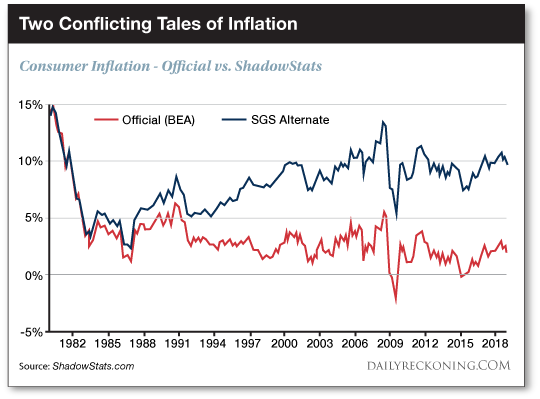 Go here should you seek additional light about ShadowStats.

Again, which do you believe?

Perhaps ShadowStats stretches the figures some. No cloak of infallibility surrounds it.

They nonetheless perform a capital service in our estimate:

So today we hoist the black flag of anarchy… and raise three cheers for our liberation from the government statistician, however temporary.

“The only good bureaucrat is one with a pistol at his head,” said the irreplaceable Mencken.

We would add but one detail:

Be sure it’s loaded…