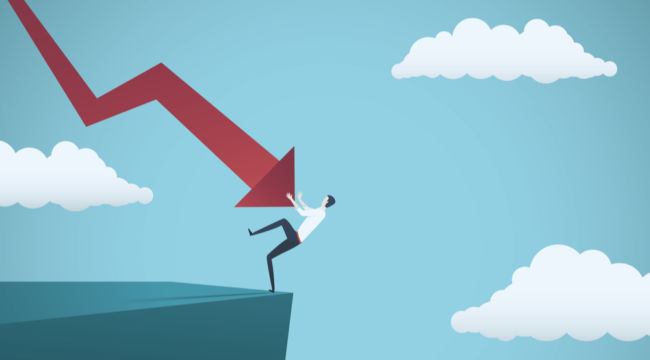 Standing on a Dangerous Financial Precipice

We’re standing on a dangerous financial precipice. The shadows of 2008 are growing larger. And we’re in unknown territory.

The risks posed by the largest of the private banks still exist, only now they’re even bigger than they were in 2007–08 and taking place against a backdrop of even more debt. That’s because there’s a lot more money artificially supporting the financial system than we had going into the last crisis.

To visualize this, imagine pulling the tablecloth out from under a table full of dishes. The higher the dishes are stacked, the greater the crash when they fall.

And the central banks have much less “dry powder” to work with this time around than they had during the last crisis.

Perhaps most alarming, we have seen virtually no real steps to reform the financial system.

Despite some cosmetic regulations to curtail certain risky behaviors since the repeal of the Glass-Steagall Act in 1999, there is still no division between depositors’ funds and those used by banks for speculation.

And the big banks continue to make massive trading bets that threaten the financial system if they go bad.

Central bankers and massive financial institutions have worked together to manipulate global markets for the past decade. It has been part of a coordinated effort to plaster over potential financial instability in the largest countries and in private banks.

Central banks gave themselves a blank check with which to resurrect problematic banks; purchase government, mortgage and corporate bonds; and in some cases — as in Japan and Switzerland — purchase stocks, too.

Essentially, the major central banks of the world have provided a subsidy of cheap money to the private banking system and financial markets. They can’t survive without it. If that subsidy went away, the whole artificial edifice would collapse. And that’s the definition of a crisis.

When would such a crisis occur?

It could be in a year; it could be two years. Or it could be tomorrow. Many of the critical elements are in place. But it’s hard to predict the exact breaking point that could bring the system down, or specifically what it could be.

The ongoing trade war is obviously a major concern, which is nowhere near being resolved. Growth is slowing in many parts of the world and geopolitical tensions are also rising again.

One of the leading contenders is corporate debt.

Corporate debt has doubled since 2008. And corporate debt levels, relative to GDP, are at their highest ever. And you can blame it on extremely low interest rates.

Corporations have taken advantage of super-low interest rates to borrow money cheaply. They used much of that borrowed money to buy back their own stocks, which has the effect of increasing the stock price. And corporations are the largest buyers of stocks, providing much of the fuel for the bull market.

But these buybacks are not connected to organic growth and are detached from the foundation of any economy. They’re basically a short-term gimmick that inhibits innovation and productivity.

And corporate debt is now at record highs.

We have built up corporate debt and the markets to such great highs that the potential for a fall would be unprecedented. And about 50% of corporate debt market is rated BBB, which is just one level above junk status.

In event of recession, liquidity in this market will dry up. And corporations that depend on cheap credit to finance their debt will be at risk of defaulting on their debt. A cascade of failures could spread throughout the system.

Many of the conditions are in place for a crisis in corporate debt.

Meanwhile, the New York Fed’s recession indicator is showing 31% odds of a recession within the next year. That’s its highest reading since the Great Recession. History shows that each time the indicator crosses 30%, recession follows. Only once has this index crossed 30% without a recession occurring in the following year — in 1967. That’s the only exception.

In addition, an important part of the yield curve inverted this week.

Many consider the 10-year versus the 2-year the most closely watched section of the yield curve. It has inverted before each of the last seven recessions. It only gave a false reading once, also back in the 1960s.

So when you add it all up, there’s a strong reason to believe a recession is coming. Now, that doesn’t mean it’s imminent. The yield curve, for example, can invert up to 18 months or even longer before a recession starts.

And history also shows that the S&P often peaks about seven months after the yield curve inverts. So there’s reason to believe that the market has life left in it, even if a recession is on the horizon.

Moreover, the good news from an investor’s standpoint is that the Fed and the world’s other leading central banks are easing again.

The Fed lowered rates in July and is on track to do so again in September. Meanwhile, the European Central Bank will also begin easing again at its own September meeting.

That means more “dark money” will flood the market to support stocks and other assets. Dark money is really the only tool central banks have in their arsenal.

It won’t do much to fight the next recession, whenever it comes. But it will likely keep the stock market chugging along for a while.