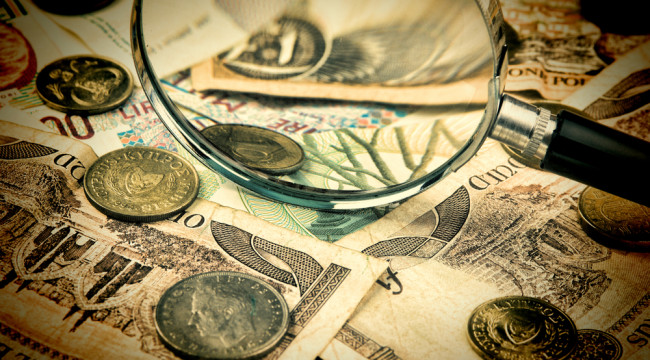 It’s surprising how many people rudely interrupt me to say, “Hey! Shut up for one minute about how the evil Federal Reserve is creating so much currency and credit that we are doomed to a horrible inflationary collapse, and just tell me if you want fries with your burger.”

On the other hand, none of them has ever asked me, “Okay, let’s see how smart you are in solving the economic mess, Mister Know-It-All who thinks he is so smart.”

And then when I get the damned burger, it has cheese on it!

One doesn’t often hear the phrases “lavish public spending” and “rising value of the currency” spoken at the same time! Ever!

And the truth is that solving the economic problem of bankrupting levels of debt is something I would dearly love to do; gloriously discovering a wonderful, wonderful way to bury oneself under mountains of unpayable debt and then — poof! — the debt is all gone! Whee!

And then — oh, frabjous day! — with no debt, we can all take up borrowing and consuming where we left off, with feckless, reckless abandon springing yet anew, like the flowers in the Spring dripping with dew, which is my phony-baloney poetic way of saying “like fat, gluttonous pigs, usually with something greasy dribbling down our fingers and chins.”

Consumption without end! Ya gotta love it! You have to love it even more than fantasizing about leaping over the counter and grabbing some burger-flipping cook’s geeky little neck, drawing one clenched fist back and screaming at him “Hey, punk! You want some CHEESE with your knuckle sandwich?”

To calm myself down from what is now known as the Mogambo Cheese Incident (MCI), as I pick the damned cheese off my damned burger, I force myself to think about the more pleasant prospect of finding this Holy Grail of economics, and I delightedly imagine the surprise on everyone’s stupid faces when they learn that I, the person they know as Stupid Mogambo Lowlife (SML), figured it out! The smartest guy who ever lived!

And if I am the smartest guy who ever lived, contrary to the expectations of everyone who knows what an idiot I really am, then maybe it is also time to re-examine some other misconceptions about me, like the popular-yet-stinging falsehoods of me being the “World’s Worst Father”, “World’s Worst Husband” and “World’s Worst Employee” just because hateful people keep giving me some stupid coffee mugs that say so, year after year after year.

My sudden interest in achieving the heretofore thought-impossible was kindled by an interesting graph by Andy Smith of LBMA Rome, which shows the decline in the US dollar since Nixon in 1969 compared to the decline in the Roman denarius in 70 A.D, which, as you may have guessed, despite a difference of 1,900 years, ended very badly, with the buying power of the Roman coins going down and down and down in purchasing power until they abruptly disappeared.

However, the thing that really caught my eye in the graph was the sharp rise in the middle of the graph, which showed the value of the denarius, under Titus. It went up! Wow!

Maybe, just maybe, there WAS a way to reverse monetary debasement! Maybe this Titus guy found it, and everyone else had always, somehow, missed it! It sure looks like it!

Excitedly, I quickly did a little research about this Emperor Titus guy, already thinking of how I was going to use this information to solve this vexing bankruptcy problem, and thus be famous and rich for having done so, and happily thinking about all the fabulous cars and beachside mansions I was going to buy, and all the hot-looking women that would always be prancing around and bringing me tasty foods to eat (fried, chocolate or sweet), and maybe how I was going to start my own band, and embed my stream of hit songs (sample song: “Drag the Federal Reserve into the Street and Spit On Them P-tui”) with secret, subliminal messages like, “Rise up and storm the evil Federal Reserve and put the USA back on a gold standard! And buy more copies of this album! Lots more!”

Well, from the initial Titus research, it just seemed to get better and better, as it turns out that he was noted for “lavish public spending,” which made me raise my eyebrows so high that I got a painful cramp in my forehead which hurt so bad that, for a few seconds, I was able to forget my broken heart pounding, pounding, pounding at the constant fear of imminent-yet-dire doom and disaster that befalls any idiot country that tries this stupid Keynesian/deficit-spending/debt crap like we have done.

And the world, too, for that matter!

So, despite my dead-bang certainty that this aforementioned stupid Keynesian/deficit-spending crap cannot possibly work and that anybody who thinks otherwise is an idiot, which doesn’t even address the fact that we are Screwed Big Time (SBT) because of it, I was unexpectedly, surprisingly, reservedly optimistic!

I mean, one doesn’t often hear the phrases “lavish public spending” and “rising value of the currency” spoken at the same time! Ever!

Growing more and more excited and curious, I feverishly read on to find out how Titus managed this heretofore thought-impossible feat! “How could everyone else not have seen this before now?” I thought to myself.

Only later on, in a seemingly unrelated part of the biography, we find that he got started when Emperor Vespasian “gave Titus charge of the Jewish war. His campaign, in which 1,000,000 Jews were reputed to have died, culminated in the capture and destruction of Jerusalem.”

So, the lesson is that old standby of government: Rob your neighbors so you can pay off your bills, prevent pesky lawsuits by killing the people you rob, use the money to pay some debts, which paradoxically makes your currency temporarily strong, and then continue to debase the currency by creating more and more of it.

The other lesson is, unfortunately, that an inflationary price has to be inevitably paid for increasing the money supply so drastically.

Buy gold and silver bullion when your currency is being debased by over-issuance. In fact, it has never failed!

For instance, an article in The Economist magazine notes that a study estimates that around $400 million was paid to the Somali pirates, who hijack freighters and demand ransom for them, between 2005 and 2012. This is an expansion of about 40% of their GDP!

The result of all that new money flooding into the Somali economy was, quoting a local, “With piracy everything became more and more expensive.”

Having debased the old Somali shilling to literal worthlessness by printing up so much of it in the late ’80s and early ’90s, they stopped printing Somali shillings in 1992, and several currencies now compete to be used for transactions.

Oddly enough, and to prove that the buying power of a currency depends on the supply of it, the money supply of those old shillings has obviously remained constant, and they now have regained some buying power because of it! Amazing!

Extrapolating, with the American government still deficit-spending to pump, pump, pump more and more currency and credit (which it got from the horrid Federal Reserve creating the new currency and credit just for that purpose) into the economy, horrible inflation in prices is our dire destiny of doom, as the worthlessness of the dollar similarly destined.

And don’t get me started on screeching about inflationary collapse, or how much burgers cost me these days, which parallels McDonald’s scrapping its Dollar Menu, as their costs are rising so high that they can no longer make a profit selling anything for a dollar.

So my delightful daydreams of solving the Big Economic Problem (BEP) were dashed, I ate a lousy-yet-expensive hamburger, I wasted a whole glob of gooey cheese, and inflation in prices continued because the evil Federal Reserve kept creating currency and credit.

Happily, on the other hand, now that I, again, am completely 100 percent sure that we are doomed to an inflationary collapse, I can just go back to concentrating on the One True Thing (OTT) that 2,500 years of history have proved: Buy gold and silver bullion when your currency is being debased by over-issuance. In fact, it has never failed!

And since that is so easy and quick, one has a lot of extra time on one’s hands with which to have fun (for instance, golf), whereby one achieves the pinnacle of investing: Acquiring a fabulous future fortune on the cheap, while doing no work whatsoever, at a beautiful, peaceful place where somebody else mows the grass, pours the beer, cleans up afterward, and neither your family, boss nor angry creditors can bother you (if you remember to turn off your phone)!

Whee! This investing stuff is easy!

Ed. Note: Never one to mince words, the Great And Wise Mogambo (GAWM) has stayed true to form, even during his absence from the pages of The Daily Reckoning. He’s still the angriest guy in economics and he regularly declares how easy investing really is — especially when realize the value of gold. But that is just one small pearl of Fabulous Mogambo Wisdom (FMW) featured in The Daily Reckoning email edition. To ensure you don’t miss any more of his FMW, sign up for the FREE Daily Reckoning email edition, right here.