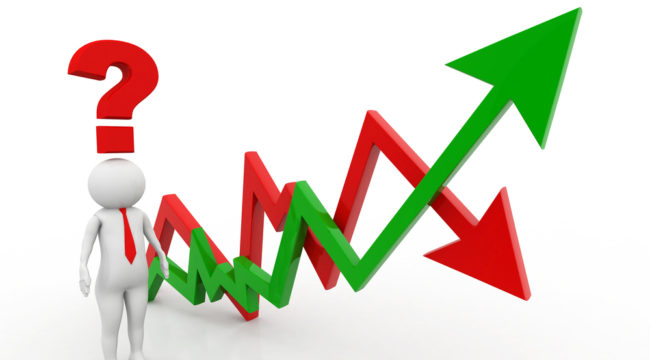 Where will the S&P be in six months?

Today we don the prophet’s motley… snatch a glimpse of the future… and reveal exactly where the S&P will close on March 31, 2018.

But Eisenstadt still toils over a complex forecasting model that spits out six-month economic predictions.

Now… we trust most forecasting tools precisely as much as we’d trust a dog with our dinner.

We admit, 0.31 is not nearly as certain as death… much less taxes.

But note how closely Eisenstadt’s model tracks the S&P’s actual record since 1957: 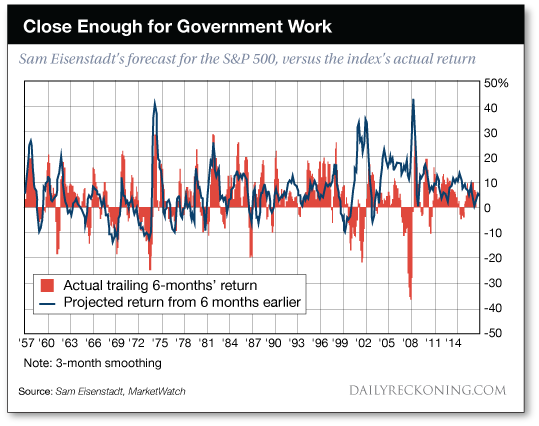 You’ll notice two significant warts on the record. But perfection is not to be found on this side of eternity.

And of all forecasting models, few come closer to the Kingdom of Heaven.

Though you might be disappointed that [it] isn’t higher, you should know that most of the models that get attention on Wall Street and in the financial press have [records] that are far lower — if they’re not actually zero.

What do today’s conditions portend for the next six months?

The Dow has notched 63 record highs since Trump’s November election.

The S&P tallied its sixth consecutive record close last Thursday — its longest streak in over 20 years.

All in all… it’s clear, sun-drenched skies as far as eyes can see.

Perhaps here you suspect we’re luring you into an ambush (it’s just like us to do it too).

After all, is not war with North Korea a live possibility?

Trump’s tax cuts may well perish in the crib.

Janet Yellen’s term expires in February. Will her successor toss markets a screwball?

The answer is on the knees of the gods… far beyond our slender understanding.

But we’ve recently discussed the possibility of a market “melt-up.”

In this melt-up, stocks reach fever-heat during the glorious terminal phase of bull markets.

In the 18 months prior to the Crash of ’29, for example, the stock market nearly doubled.

Is the market in the larval stages of its own melt-up?

Jeffrey Saut, chief investment strategist at Raymond James, says yes. The S&P “now appears to be involved in a melt-up.”

“Right now, it feels like the early stages of a melt-up,” adds Ed Yardeni, president of Yardeni Research.

“We’re on the verge of being in a melt-up stage,” affirms Jeffrey deGraaf, chairman of Renaissance Macro Research.

Veteran trader Alan Knuckman says the “melt-up” could melt higher and longer than you imagine:

The fact is real bull markets can last 12–15 years, producing overall returns of 815–935%… Today’s “historic run” is just over eight years old — and we’re sitting on overall returns of just 246%. In other words, this market is nowhere near its maximum potential.

But how can this “historic run” extend another four–seven years?

Reason staggers under the weight of the possibility… logic reels… and economic law teeters on its throne.

Are not stocks as expensive as ever?

Meantime, the “recovery” is eight years old… the third-longest since 1945.

Keynes supposedly said that markets can stay irrational longer than a fellow can stay solvent.

We take no formal position on this melt-up business…

But if it has the juice Knuckman thinks, “irrational” may ultimately require an entirely new definition…