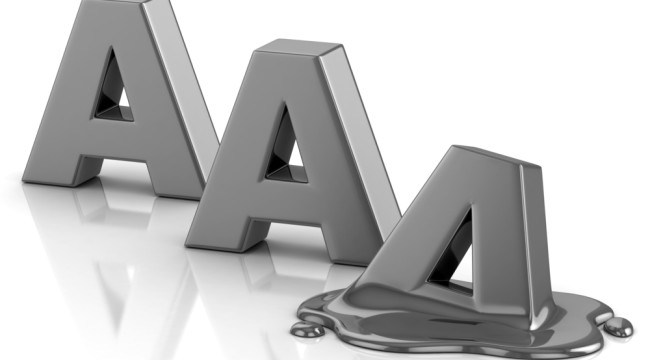 Now that they are being sued for $5 billion in damages for claiming bad mortgages were actually AAA, ratings agency Standard & Poor’s is defending itself in strange ways. Initially, they tried claiming retaliation for downgrading the U.S. rating in August 2011. When that failed, they decided to tell the truth… more or less.

Standard & Poor’s now claims that their ratings “are not indicators of investment merit, are not recommendations to buy, sell or hold any security and should not be relied upon as investment advice.”

Absolutely shocking. Who could have guessed that the agency that sold investors on thousands of bad mortgages didn’t make reliable credit ratings? It’s almost as if AAA doesn’t mean AAA anymore.

The ratings S&P now claims are meaningless come at a hefty price: as high as $750,000 to rate a single collateralized debt obligation (CDO). The firm collected $1 billion in revenue from investment banks and other issuers for all sorts of mortgage securities during the two years leading up to the housing crash.

The government alleges that S&P knew as early as 2005 that default rates on the underlying loans were soaring. They claim S&P put off downgrading the securities because it feared that taking such a negative outlook would make it look like a spoilsport… and drive up market share for its competitors.

S&P is claiming in defense that its self-description as “the world’s foremost provider of independent credit ratings” is mere “puffery.” Its mission to provide “high-quality, objective, rigorous analytical information” is likewise only couched in “aspirational terms.”

Aspiring to avoid losing billions in federal court, S&P finds itself in the awkward position of disowning its own business model. How they plan to do business in the future is anyone’s guess. Perhaps their new mission statement can read, “Providing pretty good-quality research for entertainment purposes only. Not to be construed as investment advice.”

But then, we already knew that.

P.S. Back in 2003, The Daily Reckoning began sounding warnings that the ratings agencies, banks and government officials all had it wrong on mortgages… readers who heeded our warnings saved themselves money… or even built wealth. If you’re not receiving The Daily Reckoning, you’re getting only half the story. Sign up for free right now and start getting the whole thing, every day, sent straight to your inbox.

Is This the End?

Solid GDP numbers were released this morning; stocks sell off anyway… The odds that a 10% correction will snowball into a 20% bear market — or worse…