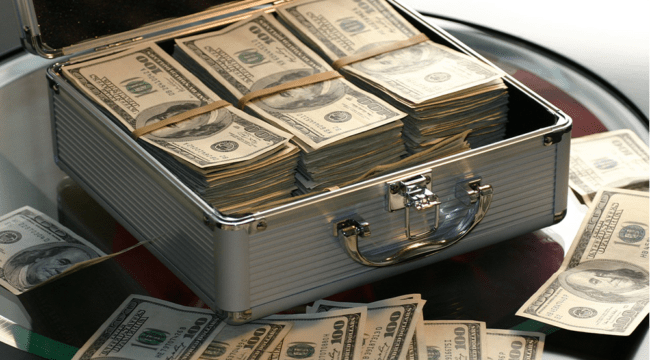 It is a supremely tragic irony that while the corporate media ceaselessly tout America’s soaring financial “wealth,” the nation’s true wealth — its social order — is fast unraveling.

While we’re encouraged to cheer billionaires blowing a tiny sliver of their wealth on space tourism and $500 million yachts as evidence of “prosperity,” our media and leadership (ahem) seem to be mystified by the unmistakable signs of unraveling.

In my analysis, the social order is comprised of all the intangible social elements that serve to bind a nation’s people beyond their legal rights. The social order includes, but is not limited to, social (upward) mobility — the ladder to advancing one’s agency (control of one’s life) and opportunities for improved security and well-being.

The social order also includes civic virtue, the willingness to share the sacrifices of one’s fellow citizens for the common good in proportion to one’s wealth and power and equal treatment before the law, not just as an abstraction but in the real world of the judicial system.

The social order also includes the moral legitimacy of the governance system: Does the state (government) serve the citizenry, or is it the other way around?

Lastly, the social order manifests social cohesion, which is the capacity for shared values and purpose and common ground, all of which generate a concern for the well-being of other citizens and a willingness to focus on shared interests.

The Rot Starts at the Top

America has lost all of these elements, as self-interest is the only value, purpose and goal that guides behavior, starting at the top: How do politicians acquire fortunes in excess of $100 million (cough, Pelosi, cough)? Through public service? (Don’t bust a gut laughing…) How do billionaires gain additional wealth so effortlessly (cough, Federal Reserve, cough)?

The rot starts at the top and then seeps down into every fiber of the nation’s economic, social and political orders. America is now a moral cesspool, and “democracy” is merely the public-relations cover for a neofeudal autocracy.

Behind every PR narrative lies the corruption of self-interest. How is it that day traders now rabidly follow Pelosi’s stock portfolio and super-wealthy Federal Reserve “leaders” front-run the Fed’s policies to further enrich themselves while claiming the mantle of “public service”?

How does a child molester like Jeffrey Epstein end up entertaining Bill Clinton, Bill Gates, the Harvard elite and a veritable who’s who of America’s wealthy and powerful players?

The evidence of irreversible social decay is everywhere: Violent behavior is now ubiquitous in aircraft and other social settings, common ground has vanished and the willingness or even the capacity to identify common interests has vanished.

“Reform” is another insider joke. Real reform might impinge on the wealth and power of our self-interested elites, so what we have instead is a simulacra of reform, which only adds additional friction to a system choking on bureaucratic sand in the gears.

Homeless encampments are now just another accepted reflection of “soaring wealth and prosperity” in America, along with the declining prospects and wealth of the bottom 80%. If you fail to repeat the party line with sufficient enthusiasm, Big Tech will send you to the Digital Gulag.

The more that politicians, Fed governors, insiders and billionaires bleat that they really, really care about commoners, the greater the gulf between the reality of their self-interest and their laughably transparent PR.

As the apologists, toadies, lackeys, factotums and apparatchiks frantically spew rah-rah PR about the “recovery” (you mean we’re all addicts and are now “recovering”?), the workforce is finally awakening to the emptiness of the PR and the decay of America’s social order:

The rewards of the economy have flowed to two classes, the Financial Aristocracy, the top 0.1% who now own more wealth than the bottom 80% of American households, and speculators, from the front-running scammers on Wall Street to the day traders gambling their Pelosi portfolios.

So by all means, focus on the inexorable rise of stocks, cryptos and housing as “proof” of America’s soaring “wealth” while the social order unravels beneath our feet.

Maybe it’s time to reconsider what we mean by “wealth”…

What Is Wealth Anyway?

The conventional definition of wealth is solely financial: ownership of money and assets. The assumption is that money can buy anything the owner desires: power, access, land, shelter, energy, transport and if not love, then a facsimile of caring.

The flaw in this reductionist definition is obvious: Not everything of value can be purchased at any price —for example, health, once lost, cannot be purchased for $1 million, $10 million or even $100 million.

A facsimile of friendship can be purchased (i.e., companions willing to trade fake friendliness for money), but true friendship cannot be bought at any price: Its very nature renders friendship a noncommodity.

This explains the abundance of wealthy people who are miserable, lonely and phony to the core. Only commoditized goods and services can be bought with money or assets.

Given the limits of the conventional model of wealth, the question naturally arises: What if we defined wealth more by what cannot be bought rather than by what can be bought?

Another way of making the distinction is to ask: What has been commoditized/globalized such that any person with money anywhere on the planet can buy it? What cannot be commoditized because it is intrinsically inaccessible to commodification?

We can start our inquiry with a series of questions:

Health that is sufficiently vibrant that it has no need for commoditized medicine cannot be bought, and therefore it is a form of intrinsic (noncommodity) wealth.

2. Can a shipwrecked individual swim two miles through open ocean from a doomed ship to safety? Money has no value if there is no help that can be bought; the individual’s only wealth in this situation (assuming they know how to swim) is their core physical strength and endurance — forms of wealth that cannot be substituted with money.

3. If Cicero was correct and “the man who has a garden and a library has everything,” then let’s ask not how extensive one’s library might be in terms of the number of volumes, but ask how many of the books (or e-books) have been read, absorbed and enjoyed by the owner?

In other words, it’s not the ownership of a library that creates noncommoditized wealth but the joy, knowledge and pleasure derived from the reading of the books that defines wealth.

4. The same analysis can also be applied to a garden/orchard: What if we ask not how large the garden/orchard is in terms of square meters, but how expansive is the owner’s participation in the care of the garden/orchard, how much pleasure is created by the toil and harvest and how much of the bounty is shared with others?

What if we defined the person with no true friends as impoverished, regardless of their ownership of assets and cash? Many people seem to have professional acquaintances they call “friends” to mask their bottomless poverty of real friends and friendships.

6. What if wealth were measured in personal integrity, i.e., honesty, trustworthiness, compassion and the ability to remain accountable even as things fall apart?

This is of course just a start: We could continue our redefinition of wealth to include kindness, empathy, the skills needed to organize volunteer community work parties and so on.

As we explore what actually cannot be bought or commoditized, it raises this question: