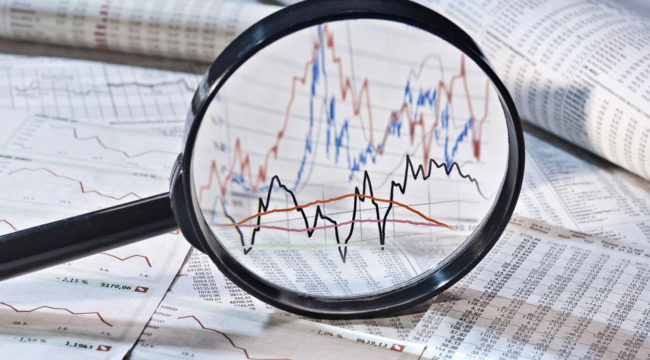 Solved: The Case of the Missing Volatility

“Where has all the volatility gone?”

The lack of market volatility was a recurring theme at last week’s Natural Resource Symposium, hosted by Sprott in Vancouver.

Yet nine of these occasions have taken place since this April alone. 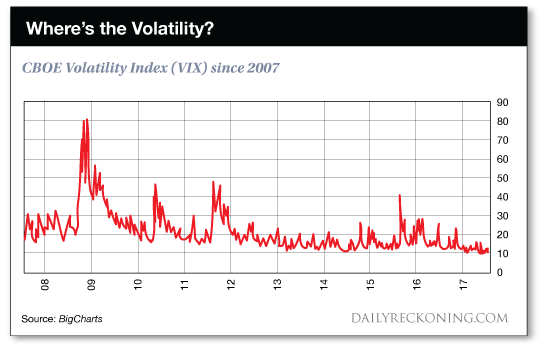 We might refer to the “calm before the storm” at this point.

Because we maintain a violent hostility toward the easy cliché, we won’t.

But put our little crotchet to one side…

When Jim Rickards took the podium last Friday, he said something about volatility that scratched lots of heads…

But he said that in reality it isn’t.

Jim said volatility has simply migrated from the stock market to another market entirely… and no one’s noticed.

At that point, the crowd sat upright in its collective seat… tuned out all noise… and tuned in Jim…

Where has the volatility migrated?

The Dow Jones industrial average ended the day 52 points higher than where it began.

Meantime, the Nasdaq took a rare day off, closing the day down less than a point.

Amazon was down over $5 at one point today before scratching its way to breakeven.

Incidentally, Amazon has lost some 10% since tallying an all-time high last week — a portent of things to come?

But it has not been eliminated, according to Jim Rickards.

Where is it hiding?

“Volatility has shifted to the foreign exchange markets,” Jim told the Sprott conference.

Jim also presented a chart showing the dramatic price swings between the euro (EUR) and the dollar (USD).

Jim revealed the EUR/USD exchange rate has seen six separate moves of 20% or more in the past eight years.

He says these are “earthquakes” in a world of fourth-decimal-place pricing:

“Forex customarily trades in so-called ‘pips,’” says Jim, “which are measured at the fourth decimal place in an exchange rate. Lately we’ve seen moves of 1,000 pips per day.”

Jim’s also an expert in complexity theory. And he says complex systems like the currency markets are most vulnerable at times like this.

He told conference-goers this market is “highly unstable” and, employing a highly technical term… “wobbly.”

Perhaps you don’t think that concerns you.

But you do hold currency of one sort or another… we assume.

Shouldn’t volatility in the world’s largest market arch an eyebrow here or there?

But currency volatility is a “scary thought,” says Jim, because the system has no anchor:

Currencies resemble boats with no moorings; they just drift around and occasionally crash into each other. The problem is that without moorings, they could all hit the rocks.

And Jim leaves us with this toothsome little morsel:

Enjoy the summer lull in stocks, bonds and commodities. It won’t last. Forex markets tell us that the system is highly volatile — it’s just that Wall Street analysts are looking for volatility in all the wrong places.

But where will a currency shock originate… and when?

Jim explained on Friday that he expects the shock to come when China devalues its currency.

That shock will not be contained but will spread quickly to other markets, a process called contagion. We saw examples of this in August 2015 and again in January 2016. Both times, a Chinese currency shock led to 11% stock market corrections.

Perhaps you now have a better understanding of why volatility in the currency markets matters.

In the meantime, you may wish to circle early-to-mid-2018 on your calendar…